5 Movie Pets We’d Adopt Any Day of the Year

From Beginners to The Zookeeper’s Wife, we love our four-legged stars

Founded in 2006, National Pet Day––which is April 11––asks us “to celebrate the joy pets bring to our lives.” The event’s website suggests a litany of wonderful ways to participate in the holiday, from adopting a pet to hiring a photographer to capture your special bond. At Focus, we’re remembering some of our favorite movies featuring our animals friends.

From the many creatures featured in The Zookeeper’s Wife­­––now in theaters––to the dogs and cats in films like Greenberg, Coraline, ParaNorman, and Beginners, these special characters remind us of the happiness and love that pets provide. While you may not be able to adopt any of these fictional creatures, you can certainly check with the ASPCA or other groups about how to provide a loving home for a dog, cat, or other critter yourself. 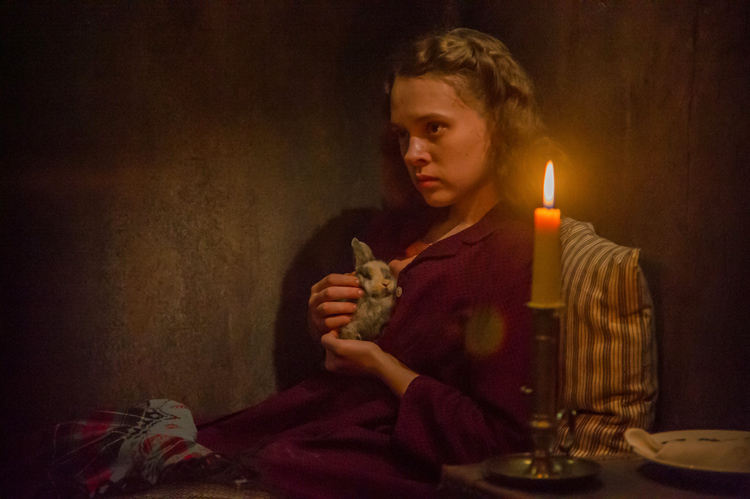 From its opening scene, where we see Antonina Żabińska (Jessica Chastain) enjoying a lazy morning with her son Rys and two lion cubs, The Zookeeper’s Wife celebrates the bond between humans and animals. In addition to saving hundreds of their Jewish neighbors during World War II, the Zabinskis also protected many animals from the perils of war.

As the film reminds us, the animals themselves play a role in helping us survive challenging times. When Urszula (Shira Haas), a girl traumatized by Nazi soldiers in the Jewish Ghetto, arrives at the zoo, she can barely speak. Antonina uses one of their small pets to help heal her spirit. “We live in a zoo. Most of the animals are gone, but this one was left behind,” she explains, handing a pygmy rabbit to her. "That’s why I love animals so much. You look into their eyes and know exactly what’s in their hearts.”

The Zookeeper's Wife is now in theaters. Find tickets near you.

In Noah Baumbach’s Greenberg, a sweet-tempered German Shepherd named Mahler saves the day in a way that only pets can. In the film, Roger Greenberg (Ben Stiller) is a Brooklyn carpenter who comes back to Los Angeles to house sit for his more successful brother. Wearing his unhappiness like a black cloud on a sunny day, Greenberg pushes away everyone, from his smiling neighbors to his brother’s happy-go-lucky assistant Florence (Greta Gerwig). Only the patient Shepherd seems to find a way in.

When Mahler falls ill from Immune Mediated Hemolytic Anemia (IMHA), Greenberg and Florence have to find a vet to care for him. In their journey to find an animal hospital that treats the dog’s special ailment, Greenberg finds himself turning into a different person. He not only connects to Florence but rediscovers how to love by caring for Mahler. In the end, as The Bark’s Lisa Wogan points out, Mahler captures “the way a dog can crack open a closed heart.”

Get Greenberg now at Amazon.

Ben Stiller and Greta Gerwig tend to Mahler in Greenberg

While the pets from LAIKA’s films––the cat in Coraline and Bub the ghost dog in ParaNorman––are stop-motion creatures of the imagination, the love and loyalty they show suggests they were clearly drawn from real memories.

In Coraline, Cat is an elegant, black feline (voiced by Keith David) who joins the intrepid 11-year-old on her many adventures. Mysteriously appearing out of nowhere, Cat also gains a voice when accompanying Coraline to the Other World. A bit secretive, even mischievous, Cat is nevertheless always there for Coraline, even if her support is sometimes offered with claws out. When Coraline dismisses the idea that the Other Mother wants to eat her, Cat responds, “I don’t know. How do you taste?”

In ParaNorman, Norman (voiced by Kodi Smit-McPhee) uses his power to communicate with the dead in the sweetest way possible when he helps his best friend Neil (Tucker Albrizzi) connect with his old dog Bub. The victim of a hit-and-run accident, Bub may no longer be among the living, but that doesn’t mean he isn’t still in Neil’s heart. Bub proved so memorable that LAIKA––a company that shares its name with the first dog sent into space––created a special mobile game, 2-Bit Bub, just for him.

Get Coraline now at Amazon.

Get ParaNorman now at Amazon.

Norman helps Neil play with his old dog in ParaNorman

At the center of Mike Mills' Beginners is Arthur, a Jack Russell Terrier whom Oliver (Ewan McGregor) takes in after his father (Christopher Plummer) passes away. Throughout the story Arthur is there, listening and talking back (with subtitles) as Oliver moves from grief to hope and love. For Mills, the inclusion of Arthur was close to his own heart since, as he tells The Bark, “I inherited my dad’s 13-year-old Jack Russell, and he was there while I was writing” the screenplay.

Cosmo (who plays Arthur) became a star after his powerful performance. In addition to rave notices, he graced the August 2011 cover of The Bark. But perhaps his most meaningful achievement was inspiring his co-star McGregor to adopt a dog himself. "I was looking for a replacement for Cosmo because I couldn’t stand the idea of not having him around," McGregor told the Los Angeles Times. "I found my dog on the last day of the shoot.”

Get Beginners now at Amazon.

Featurette about Cosmo in Beginners

This feature is part of #Focus15, a celebration of Focus Features’ 15th Anniversary.  Sign up for the Focus Insider newsletter to be first in line for to hear about special events, amazing sweepstakes, and more exclusives on your favorite films.