On Her Birthday, 5 Reasons We Treasure Rachel Weisz

What makes the star of The Constant Gardener so spectacular

Born on March 7, 1970, Rachel Weisz fell in love with performing as a teenager, quickly developing a knack for portraying smart, passionate, and caring women, a perfect combination for a Pisces. She has graced two Focus films––The Shape of Things and The Constant Gardener––with her radiant talent and intelligence. Today, we salute her remarkable achievements by exploring five things that make her one of our favorite actresses.

She’s one of our Oscar winners

At the 78th Academy Awards, Rachel Weisz took home the statuette for Best Supporting Actress for her performance as the spirited Tessa Quayle in The Constant Gardener. Adapted from John le Carré’s novel about corporate corruption and conspiracy in Africa, Fernando Meirelles’ thriller casts Weisz as the wife of Justin Quayle (Ralph Fiennes), a career diplomat trying to juggle his staid job and his independent spouse. Still early in her career, Weisz brought to the part the complexity and dignity for which she would become renown. “She’s so human. I remembered when we first met, Rachel had the same passion that a political activist would have,” Meirelles tells film writer N. P. Thompson. To comprehend the film’s labyrinthine politics, Weisz flew to Kenya to talk directly with actual aid workers and political activists. As an artist, she wanted to realize fully the rich complexity of le Carré’s character. “I loved the fact that she wasn't entirely sympathetic,” Weisz explains to the Guardian. “She was a lone warrior with all the contradictions that that brings.” And her hard work paid off. Variety’s Todd McCarthy applauded how, stepping “straight from the pages of the book onto the screen, she fully embodies the driven, lusty, unstoppable Tessa.” In addition to winning the Oscar, she also won a Golden Globe for her unforgettable performance. 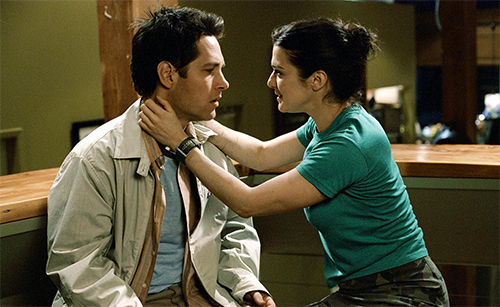 Before stepping onto a movie set, Weisz had trod the boards of many a stage. At Cambridge, she started her own theater group, Talking Tongues, whose piece, Slight Possession, won the Student Drama Award at the Edinburgh Fringe Festival. In 1994, she turned heads in Noel Coward’s Design for Living as, in the words of the Independent, “a devastatingly sexy Gilda.” Even as her TV and film career started heating up, Weisz stayed true to the theater. In 1999, she had to skip the world premiere of her first blockbuster, The Mummy, because she was due on stage to play Catherine in Tennessee Williams’s Suddenly, Last Summer. Focus Features’ 2003 film, The Shape of Things, gave Weisz the opportunity to bridge her two loves. Originally staged as a play in 2001 with, as the Guardian’s Michael Billingon put it, “a knockout performance from Rachel Weisz,” the drama was adapted for film by its writer/director Neil LaBute with the same cast. Weisz plays Evelyn, a smart, sexy grad student who transforms her dowdy boyfriend (played by Paul Rudd) into the man of her dreams––as well as the subject of her thesis––in this philosophical drama of love and change. Weisz transformed her theatrical role into a cinematic tour de force.

Weisz continues to garner applause and critical raves for her theatrical work. In a 2013 production of Harold Pinter’s Betrayal, Weisz, along with her real-life husband, Daniel Craig, and Rafe Spall were commended by The Hollywood Reporter as being “at the absolute top of their game.” Most recently she dazzled audiences in a revival of David Hare’s Plenty at New York City’s Public Theater.

There isn’t a genre she can’t conquer

Describing working with Weisz on The Constant Gardener, her co-star, Ralph Fiennes, tells the Guardian, “She's not fearful, she's willing to throw caution to the wind in order to get to the core of a scene.” Fearless also describes Weisz’s passion for tackling any type of genre, subject matter, or character. In 1999, appearing both in an epic historical drama, Sunshine, and a big-screen popcorn pounder, The Mummy, Weisz made it clear she was not going to be typecast. With sublime grace and dramatic agility, she moves effortlessly from a coming-of-age comedy, like About a Boy, to a serious drama like The Shape of Things. Or from a mega sci-fi saga, like The Fountain, to an international thriller like The Constant Gardener. Part of her drive comes from her being a movie lover first and foremost. “I just really liked stories,” Weisz tells the AV Club. “Film and theater are very powerful storytelling mediums. You sit in a dark room and enter another world. I love that as a member of the audience, and I sort of wanted to get on the other side.”

I just really liked stories...Film and theater are very powerful storytelling mediums. You sit in a dark room and enter another world.

Celebrated for her beauty, but known for her brains

Starting a modeling career at 14, Rachel Weisz continues to shine as one of the world’s great beauties. She is on Empire Magazine’s list of the 50 sexiest female movie stars and was featured in Glamour’s “The 50 Most Glamorous Women of 2009.” In 2010, she topped an Esquire poll of the woman men would most like to marry. Fashion designer Narciso Rodriguez names her as one of his most important creative muses. But her beauty is definitely not just skin deep. After graduating from the prestigious St. Paul’s Girls School, she went on to take a degree in English literature from Cambridge University where she wrote a dissertation on the American writer Caron McCullers and the southern concept of femininity. A friend of the family and newspaper columnist, Matthew Norman, told the Guardian, “She could have become an academic, and often talked about how she might become a barrister. It feels like an accident of fate that she's become a huge movie star." 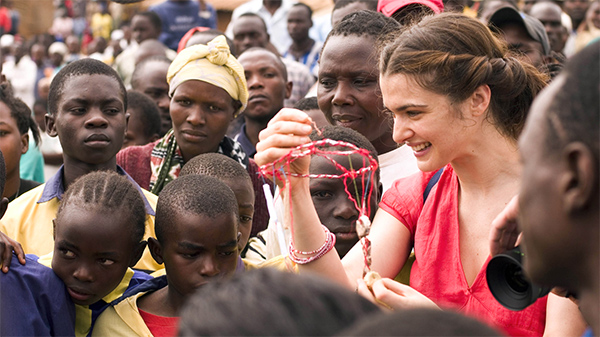 Rachel Weisz in Africa in The Constant Gardener

She honors her family by giving back

One of the reasons Weisz so poignantly captures women, like Tessa Quayle in The Constant Gardener, who fight for human rights is because social justice is part of her DNA. “Both of my parents were [Jewish] refugees from Eastern Europe,” Weisz tells People magazine. “My mom, she got out of Austria, the first country to fall to Hitler, in 1939.” Her father, George Weisz, left Hungary just before the Nazi occupation, moving to London to pursue his work as an inventor. "My father invented thousands of things—a metal detector which clears a safety path for land mines, an artificial respirator, [and] a milking machine so humans needn't milk cows by hand,” Weisz told the New York Post. “I am very proud of him." Her parents' history and legacy has influenced her own desire to give back. After her Oscar-winning performance, she helped set up–– along with Ralph Fiennes, director Fernando Meirelles, and author John le Carré­­––the Constant Gardener Trust, which benefits the impoverished areas of Kenya where they filmed. And she wants her charitable work to provide an example for her own son. "Kids watch their parents closely,” she tells the Evening Standard. “Hopefully they grow up in a culture of caring about others, and it will be up to them to decide what they want to do, but hopefully it will rub off on them."

Get The Shape of Things now at Amazon.