A Decade Later, Burn After Reading Is Still On Fire

Although Joel and Ethan Coen's Burn After Reading came out ten years ago, its hilarious take down of Washington shenanigans—from X-rated political secrets to people trading in top-secret dossiers—feels remarkably fresh, like just another day of coverage on CNN. Indeed, GQ Magazine calls it “the Perfect Coen Brothers Movie for the Trump Era." But what makes the film  timeless is how skillfully the writing-and-directing duo render man’s eternal silliness. When a pair of dim-witted gym workers (Brad Pitt and Frances McDormand) find the lost tell-all memoir of CIA analyst Osbourne Cox (John Malkovich), their clumsy attempt to extort money for its return unleashes a wave of craziness that sweeps up everyone in its wake, including Cox’s wife (Tilda Swinton) and the U.S. Marshall with whom she is having an affair (George Clooney). The madcap antics of these political players teach us an important lesson claims IGN: "It's perfectly alright to enjoy some dumb fun—especially if it's smartly done."

To celebrate the film’s ten-year anniversary, we look back at what makes Burn After Reading as incendiary as ever.

Get Burn After Reading now on iTunes or at Amazon.

Chaos reigns supreme in the official trailer for the Coen brothers' Burn After Reading.

After winning Academy Awards® for Best Picture, Best Director, and Best Adapted Screenplay for their dark drama No Country for Old Men, the Coen brothers returned to something lighter with Burn After Reading. “We just said, ‘Let’s do a spy movie,’ I think mostly because we had never done one before,” Joel remembers as the film’s impetus. The genre may have been new to them, but, as Collider points out, “the Coens know how to twist the familiar and turn it into something completely new.” In this case, their comic twist on our intelligence organizations becomes, according to Indiewire, “a portrayal of bureaucracies that possess extraordinary powers of surveillance, but not knowledge.” 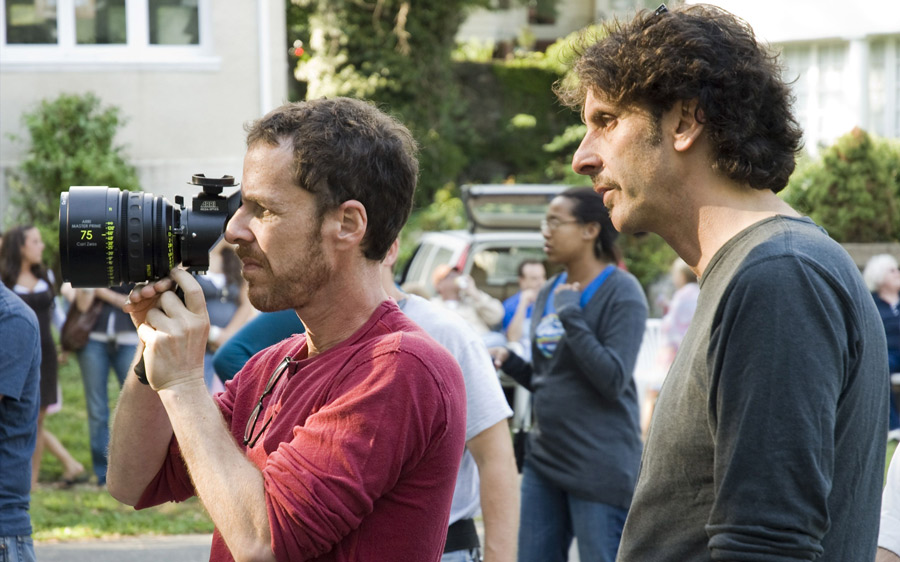 The Coen brothers orchestrate the mayhem on the set of Burn After Reading.

Clooney, who had appeared in two Coen brothers films before, knew the screenplay would be hilarious. “They are great writers,” Clooney exclaims. “There’s a specific pattern to the way they write and their rhythm.” To some extent, Clooney’s lines fit so comfortably because they were tailor-made for him. “All of their parts were written for Brad [Pitt], George [Clooney], Fran [McDormand], John Malkovich and Richard Jenkins,” Ethan Coen explains. “We just wanted to do something with these specific people.” For the Coens, this matching of actor to character allowed them to fully realize their tale's comic potential. For USA Today, “whether the scenarios are pseudo-sinister or ridiculously off-the-wall, it's consistently funny—with witty dialogue and offbeat banter that stays in your head for days.” 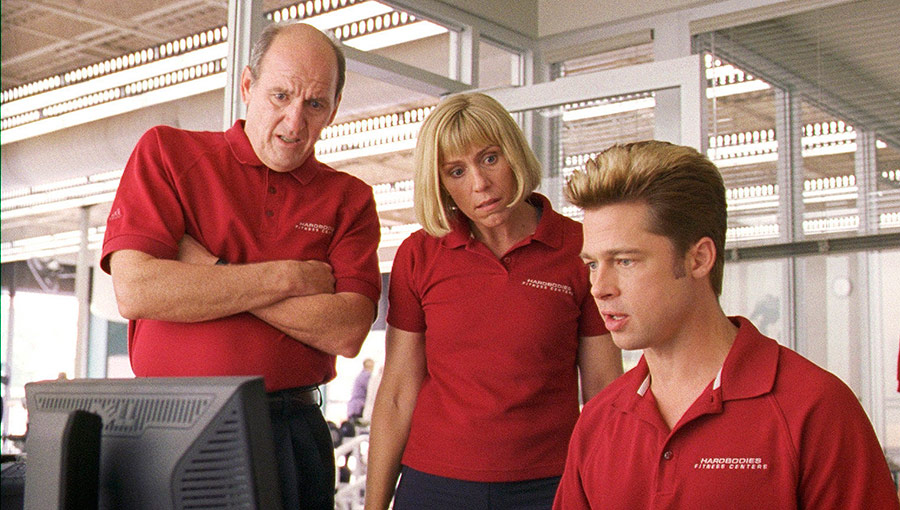 Richard Jenkins, Frances McDormand, and Brad Pitt had their parts custom written for them.

The star-studded cast of Burn After Reading brings together both veterans (Clooney, McDormand, Jenkins) and newcomers (Swinton, Malkovich, and Pitt) to the Coen brothers' universe. A-list stars sign up for the Coens' mayhem because of the free rein they're given to flex their comic muscle. The Daily Mail exclaims, “of all the Coens’ comedies, this is one of the best acted.” Indeed each actor gets to shed his/her serious mantle to play their very best stupid. “Pitt is dynamite, killing every trace of his trademark cool,” Rolling Stone exclaims. The San Francisco Chronicle notes that "Clooney relishes lampooning his leading-man image." And Empire adds, “McDormand’s disjointed smile and genius for body-language are ideal for nervy, jabbering Linda.” 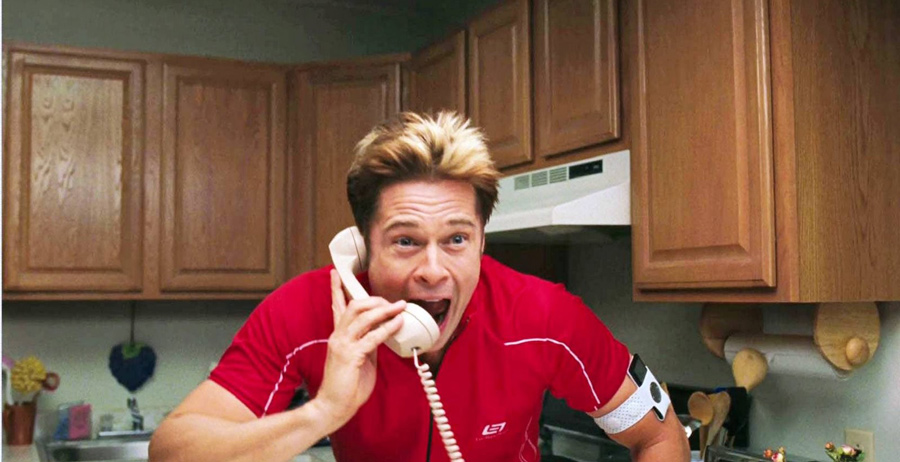 Brad Pitt got the chance to go crazy in Burn After Reading.

The meaning of nonsense

At one point, a prickly CIA brass (played by J. K. Simmons) tells his underlings, “Report back to me when it makes sense." Of course, they never return. For the Coen brothers, comic madness doesn’t need a reason to exist. By letting the film’s inanity play at full volume, the film nevertheless unveils some deeper truths. As a spy thriller, it reveals how escalating nonsense not only fuels the plot but also provides cover for intelligence agencies with no clue about what is going on. Likewise, the abiding silliness of the characters demonstrates, as Roger Ebert explains, “something more” going on with them. “There’s a poignance” in McDormand and Clooney—"Both are looking for love in all the wrong places.” 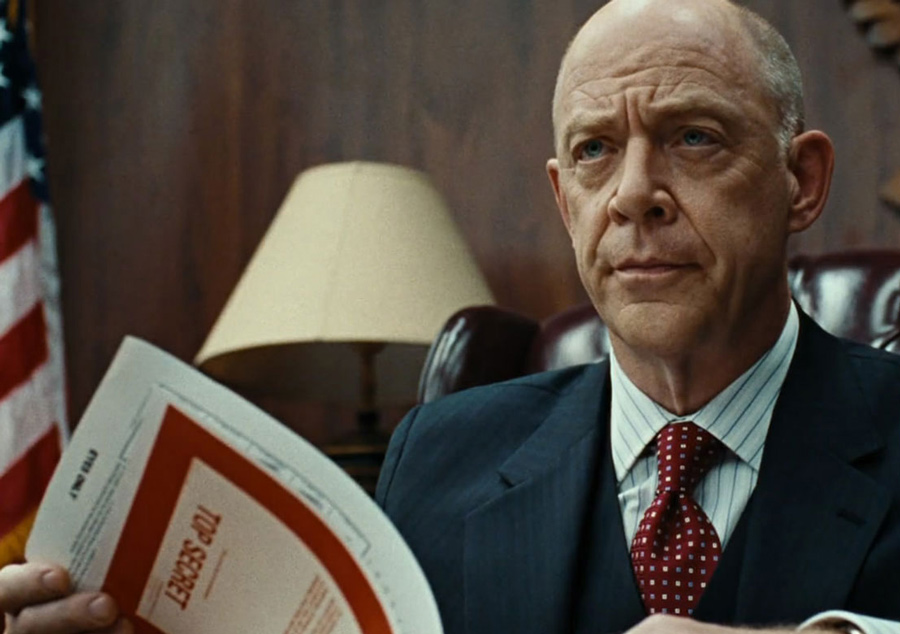 J.K.Simmons oversees the unintelligence agencies in Burn After Reading.