Film director Justin Chon knows something about feeling like an outsider in America. He was born in Garden Grove, Calif., but throughout his life, he’s always been asked what country he’s from. “It’s something I've experienced, from day one, being asked where I'm from,” Chon says. “But when I go to Korea, they consider me American.” To him, being Asian-American is being in “that sort of in-between place.” He documented that liminal feeling to acclaim in his 2017 film Gook.

In his newest film, Blue Bayou, Chon is telling the story of another Korean-American who feels out-of-place in America, but it is an Asian-American story that has rarely been told before in cinema. In Blue Bayou — which Chon wrote, directed, and stars in — Chon plays Antonio, who was adopted from Korea as an infant to white parents. Years later, Antonio faces deportation, because his adopted parents never filed paperwork to naturalize him.

Blue Bayou premiered at the Cannes Film Festival and will be released in U.S. theaters on Sept. 17. Chon was inspired by the story of real-life Korean adoptees who, even though they lived in America their entire lives, were deported back to a country they did not know.

“I thought it was incredibly unjust,” says Chon. “My heart bled for them. I just think that if you are adopted here by U.S. citizens, and the government acknowledges the legality of the adoption, I just don't understand how they can decide to deport these people after they've become adults.” Blue Bayou is Chon’s way of “trying to represent their stories and shine a light on this issue, hoping that something can change.”

Under current U.S. law, any international adoptee born after 1983 was automatically granted citizenship. But that left anyone born prior to 1983 vulnerable.

In playing Antonio, Chon drew on his own feelings of alienation, along with research. He interviewed real-life adoptees, consulted with an immigration lawyer, and screened a version of the film for Korean adoptees. “I'm not adopted, I'll never know what it feels like to be adopted,” he explains.

In Chon’s estimation, that quintessential Asian American feeling of not belonging to either America or Asia must be more “amplified for adoptees than those of us who have parents that immigrated and were born here,” he says. “Being adopted, being brought from another country without having any say in it, that is one thing. And then also, then the country's [America’s] saying, you don't belong here anymore. I couldn't even imagine how damaging that can be for one's mental health and psyche.”

In Blue Bayou, the threat of deportation threatens to tear apart Antonio and his chosen family: his wife Kathy (played by Oscar® winner Alicia Vikander) and their daughter (Sydney Kowalske). And it’s not just the threat of a physical separation. Antonio begins to feel alienated from his wife and daughter, and his entire life.

That’s where Linh-Dan Pham’s character, Parker, comes in. Like Antonio, Parker left her country of origin at a young age, but as a Vietnamese refugee. And that’s another story that is not commonly told in cinema — there’s plenty of Vietnam War stories featuring American soldiers, but very few telling the story of Vietnamese refugees.

The authenticity and humanity of the characters in Blue Bayou is what drew Pham to the role of Parker. “I read the script, and I thought, ‘Oh, my God, this is such a beautiful story.’ And I actually cried,” she remarked. “What I liked about Justin's films is that he gives you a snapshot of the reality of America. And yet, there are very universal, human themes of: What is a family? What is it to be a daughter? A father, a mother, a sibling?”

What I liked about Justin's films is that he gives you a snapshot of the reality of America. And yet, there are very universal, human themes of: What is a family? What is it to be a daughter? A father, a mother, a sibling?

In Blue Bayou, Antonio and Parker meet and form a poignant friendship. Though their scenes can be read as separate from the main drama of Antonio’s deportation and its effect on his family, those little “bubbles of sanity,” as Pham puts it, are significant. Parker brings Antonio into the fold of her own large Vietnamese family and allows him to be around other Asian Americans for the first time.

“Parker served as a mirror to Antonio,” explains Chon. “She represents the family he never had, it's like a look at what your life could have been.”

Pham also sees the two characters as connected, not just because they’re Asian American, but because they are characters with heavy history, who feel removed from the world around them. “You know what loneliness is, you know what it is to be the odd one out — there's the bond, no matter what happens,” says Pham.

Pham was also able to bring her own experience as a refugee into playing Parker. Pham’s parents escaped from Vietnam to Paris when she was one year old. “I always remember being the only Asian in school,” Pham recalled of growing up in France. “So I did feel like an outsider in a way. But my parents always insisted that I not forget my roots.”

And that sense of rootedness is what Parker gives to Antonio in Blue Bayou. Parker is more connected to her ethnic background than Antonio. So she encourages him to, in Pham’s words, “keep your roots. And it makes you stronger actually, to know where you come from.”

It is that encouragement to finally confront his traumatic past, and come to terms with it, that “allows [Antonio] to be more grounded and make decisions that are best for his family,” says Chon. “Those introspective moments of where he's from and where he's going allow him to be a better father.” 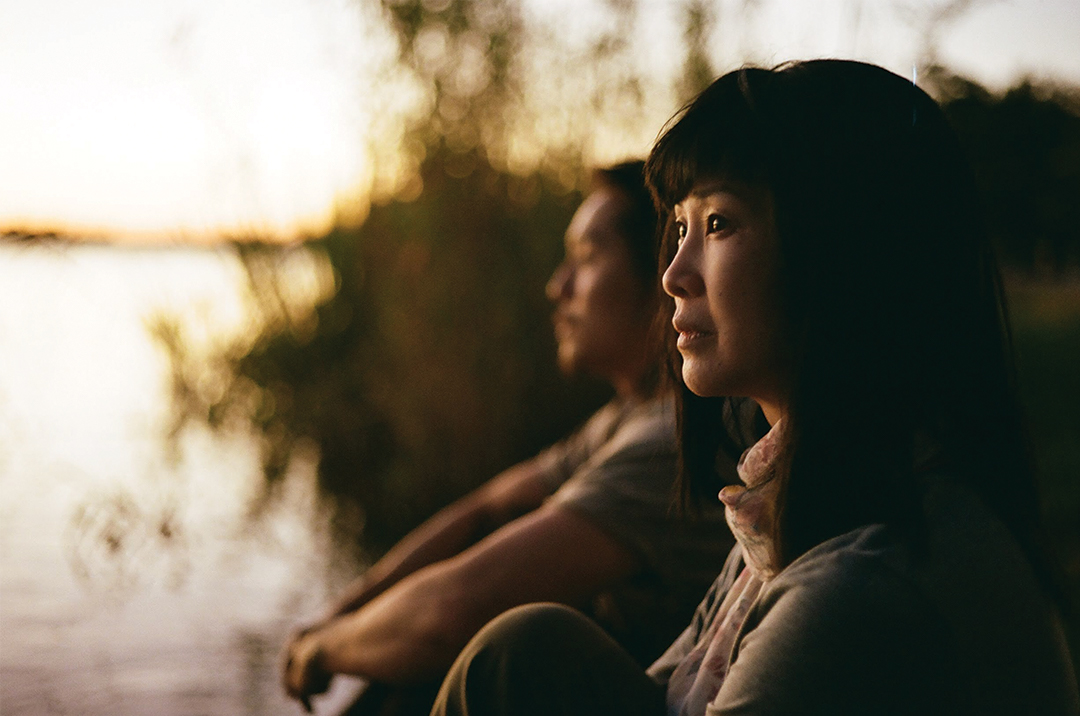 That sense of sharing among Asian Americans of different backgrounds is something that Chon had not seen before in film. Since he wrote and directed the film, Chon saw the opportunity to go beyond one ethnicity and have a cross-cultural conversation.

“I really feel like our stories tend to be relegated to, like, only one per film: You can only have one Asian character per film. And even if it is about Asian Americans, it's usually one ethnicity,” he explains. “I really wanted to use this opportunity to have two Asian American ethnicities in one film and have them relate with one another, and kind of in a constructive way. And also, how we can discuss our shared experiences and different experiences, and how we learn from each other, which I don't feel is very present in American cinema.”

What Chon wanted to do in Blue Bayou was show the vastness of what the Asian American experience can be, and how it cannot be defined as any one thing. And Chon is determined to keep that message going in his next film. He has just completed filming a new project, about an Indonesian father and son. Chon is aware that East Asians are more visible, relatively, in Hollywood than Southeast Asians, and he wants to bring visibility to that underrepresented group next.

“I can lend my platform, and my directing, to also telling their stories,” he says. “I think the way we [Asian Americans] can be accountable and also help one another, instead of just being hyper focused on our own ethnicity, is to tell each other stories. It'll create more understanding and much more solidarity amongst us.”

Get tickets to see Blue Bayou in theaters today.

The official trailer for Blue Bayou