Often the first impression of a film comes from a photograph one sees in a review, interview, or even poster. These images are for the most part shot by the set still photographer. To capture the story and spirit of Emerald Fennell’s Promising Young Woman, veteran still photographer Merie Weismiller Wallace was on set. In addition to snapping shots that portray Carey Mulligan's Oscar®-nominated performance, Wallace documented how thrice Oscar®-nominated Fennell enabled her cast and crew to bring her vision to the screen.

For over thirty years, Wallace has been working alongside legendary directors and cinematographers to capture the images that memorialize such films as Titanic, Million Dollar Baby, Nebraska, and Wish I Was Here. For Behind the Credits, we spoke with Wallace about how she works on set to get her shots, what sort of images she captures, and what made working on Promising Young Woman so memorable. 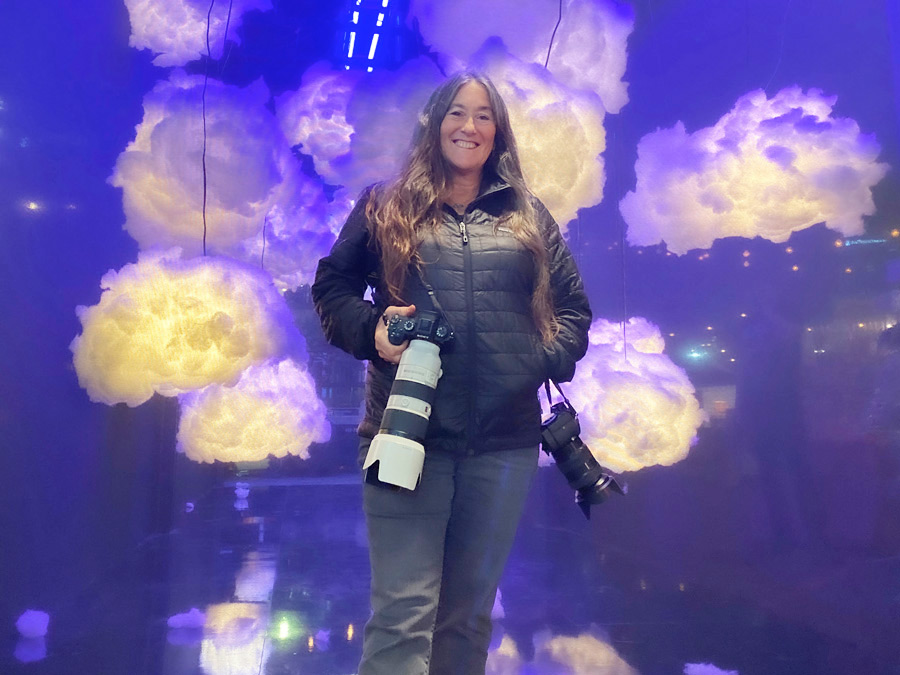 What exactly does a still photographer do?

On set, still photographers stand beside the motion picture or television camera and shoot stills for publicity, advertising, and archiving. Our images look like frames pulled from the film, but we stop action and create clear vivid images, whereas frames from motion picture film and video generally have motion blur. We also step back and capture how the film was made, who the filmmakers are, and what the cultural milieu of the project is.

How do you work with the crew shooting the film?

It is a misconception that we are not part of the crew. We are. We are part of the camera department and have the exact same benefits and restrictions as all crew members. Still photographers are not required to make the movie, but we are required to sell it and attract an audience to a movie. Our work can only be created during filming. Just today, an A-Camera operator saw I was struggling to position myself to get the best shot and he told me to stand as close to his lens and him as possible and called for an apple box so I could sit comfortably holding my heavy lens during the long take. That is how the pros roll!

Set photographers navigate a set just as the sound boom person does. We see what the camera and actors are doing, and we figure out where we have to be to do our jobs. We are like members of a school of fish on set, dancing around and distancing ourselves from the moving camera while we capture the great work of the actors and filmmakers. That being said, if rooms are too crowded or if someone is tense, the still photographer is sometimes told not to be there. Set photographers wear black like all set folk, so we don’t stand out. And we keep a low profile so as not to draw attention to ourselves. Our best work comes when we are ignored. 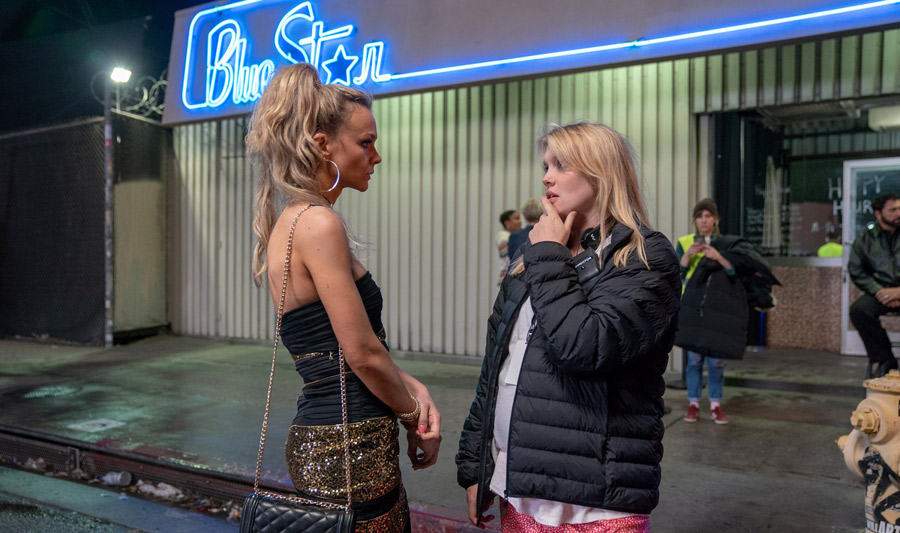 From your experience, what makes a good still photographer?

A good set still photographer must be technically proficient and creative. We must be emotionally intelligent to read the set dynamic and to capture the fleeting moments within actors’ ephemeral performances. A good photographer is an artist, sees the art in the craft, and captures the vision that the director of photography, production designer, director and actors collaborate to put forth.

What images for Promising Young Woman were important for you to capture?

The most important images for me to capture were of Carey Mulligan as Cassie in character and in context. It was a multifaceted performance, because her character evolved throughout story and was constantly pretending to be someone she wasn’t. I was really dialed in to making sure we also had evocative and characteristic images of our director Emerald Fennell — as I do with all my directors. That was all the more inspiring because she was seven months pregnant in addition to being a delight to work with and having a remarkable sense of humor. She had a strong relationship with our DP Benjamin Kracun, and capturing their collaboration was a joy. 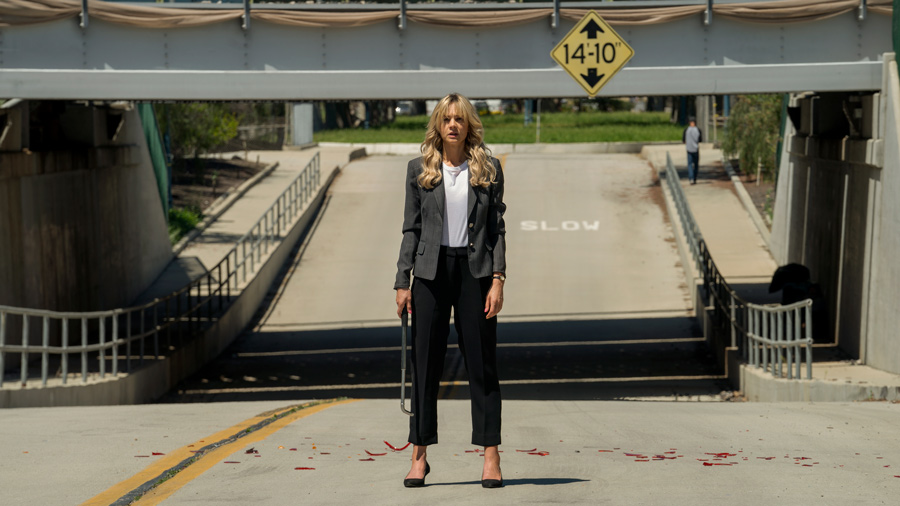 Are there any photographs from Promising Young Woman that you are particularly proud of?

It was fun shooting the photo [of her in the middle of an empty freeway]. Her performance in that scene, take after take, was so strong. Then she got the go-ahead to actually smash a windshield and the driver screeched off leaving her alone in the road with a crowbar. Another image I love is one of her walking past a dump in the early morning eating a hot dog with red ketchup dripping from it.

When you work on a film, do you have a list of images that you must capture?

Some photo editors give a list of their priority images, but mostly set still photographers aim to capture what the motion picture camera does. If a scene is only shot in singles, and the photo editor requests a strong two-shot, no such luck. Most photo editors trust us to know our job and to know what is important to the movie, who the players are, and how to get the most out of every scene. I definitely change my style to echo the style of the film and cinematography. That is one of the joys of the job. We do not answer to anyone creatively on set, unless there is a producer or director who takes an interest. We send our stills to the publicity department at the studios. We speak with our photo editors there or prepare our images for the studio that picks up the movie for distribution. 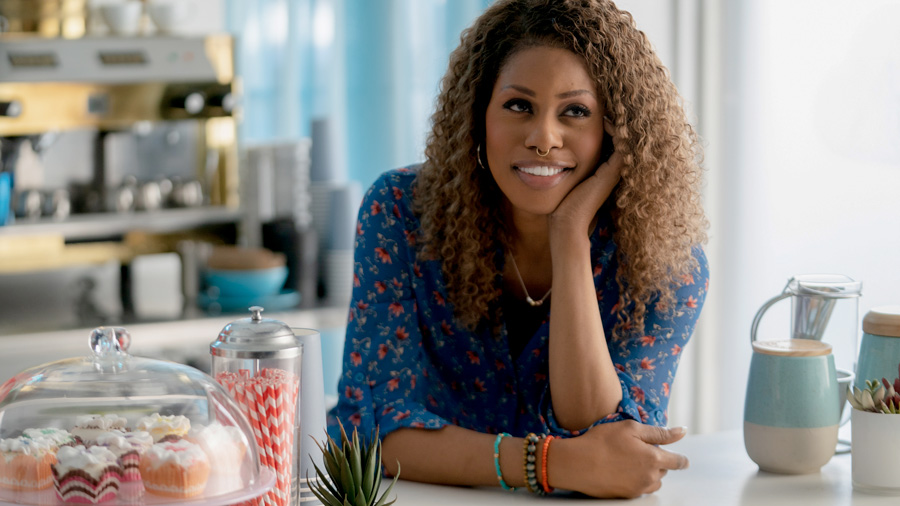 You’ve been a still photographer for over 30 years. What are some of your best — or most embarrassing — moments on set?

Some of my fondest memories are of laughing until tears steamed up my eyepiece on Sideways or crying during a take of Jack with blue lips beside Rose's raft on Titanic. Once early on, a camera operator told me, “You looked great in dailies!” I’d gotten into a shot somehow on a multi-camera setup and they’d all seen it when they watched the dailies that day. I was SO embarrassed. The worst moments are the long, cold nights of exhaustion when you wonder why you chose this career!

How did you get started being a set photographer?

I went to the University of Southern California School of Cinematic Arts and got an MFA in Film Production. I knew I wanted to work in film because of its unique aspect of creative collaboration. I started shooting stills on feature films to support myself and to be on set with professionals and learn more about filmmaking. Once I started shooting stills, it was like Alice falling into the White Rabbit's hole. I didn’t look back.

You were president of the Society of Motion Picture Still Photographers. What does the organization do?

The Society of Motion Picture Still Photographers, the SMPSP, is a collective of experienced and successful set still photographers dedicated to the art of motion picture still photography, to the proper archival preservation of all set photography, and to educating people about what we actually do and the value of our bodies of work.

What was the first movie you watched that made you want to work in the film industry?

It was The Seventh Seal (directed by Ingmar Bergman with cinematography by Gunnar Fischer). That film was so magnificently shot, so remarkably executed, so amazingly visual and singular. It really took the creative medium of visual storytelling to a new level and inspired me greatly.

If you weren’t a set photographer, what would you like to do?

If I wasn’t a set photographer, I would want to be in the healing arts to help people move past the difficulties their lives have presented and to help them self-actualize to their true, unique potential.

Well, if I made a movie, it would be about a person finding their true self from amongst the rubble of their childhood and our culture. And how that changed their life and the lives of others. It would be an inspirational tale, while simultaneously being good entertainment. So many people put one foot in front of the other and believe their problems are inherent and unavoidable. I’d like to see more people find their true potential and calling.