In Paul Thomas Anderson’s Phantom Thread, fashion designer Reynolds Woodcock (Daniel Day-Lewis) lives with his sister Cyril (Lesley Manville) in a world of impeccable taste. Everything in their London townhouse/showroom, from the paintings to the décor to the flowers, testifies to the height of elegance and refinement in 1954.  That is, until Alma (Vicky Krieps), a foreign waitress Reynolds meets by accident at a country inn, disrupts their perfect order. To recreate Woodcock’s realm of sophistication, production designer Mark Tildesley and set decorator Véronique Melery assembled a team to create a look that Rolling Stone called “gorgeous in every detail.” Even the flower arrangements got special treatment. Celebrated florist Juliet Glaves, who runs the London-based Juliet Glaves Flowers, was called in to bring her expertise to design and set the arrangements that appear in the Woodcock showroom and at Owlpen, Reynolds' country getaway. In addition to serving as a florist for the film's production, Glaves was asked by Anderson to play one in the film. While new to a film set, Glaves was celebrated by Melery, saying she “deserves an award for her artistic qualities, her patience, her sense of humor and resilience on this movie.”

We spoke with Glaves about curating the flowers for the film's fictional fashion designer, playing a florist in the film, and what it was like working on Phantom Thread.

Watch Phantom Thread now on iTunes or at Amazon.

The official trailer for Phantom Thread. 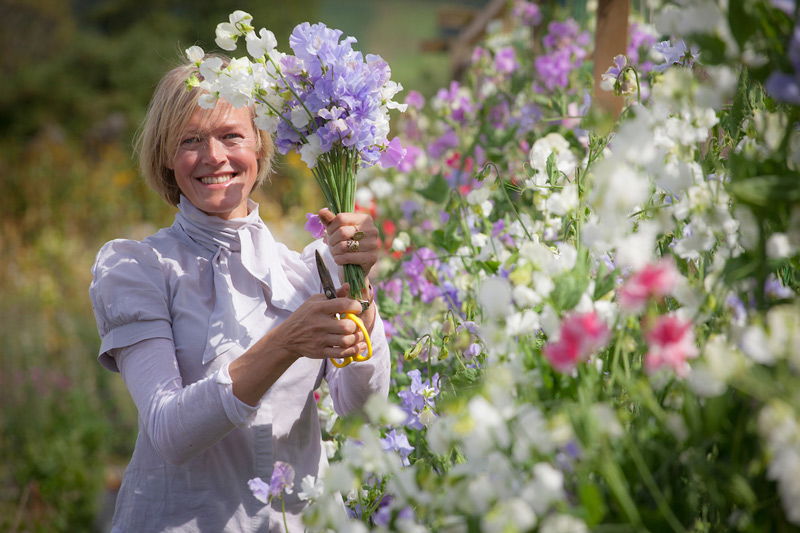 How did you become the florist for Phantom Thread?

I received a phone call from Phantom Thread’s set decorator Véronique Melery asking if I would be interested in working on a new movie directed by Paul Thomas Anderson and starring Daniel Day Lewis. One of Veronique’s team, Tamsyn Mystkowski, who I’d met designing a floral set for Hermès, recommended me. It is still one of the most exciting phone calls I have ever received. My dream job.

Had you ever created arrangements for film, TV, or theater before?

No, but I was able to draw on my experience from my earlier careers in fashion design and television. 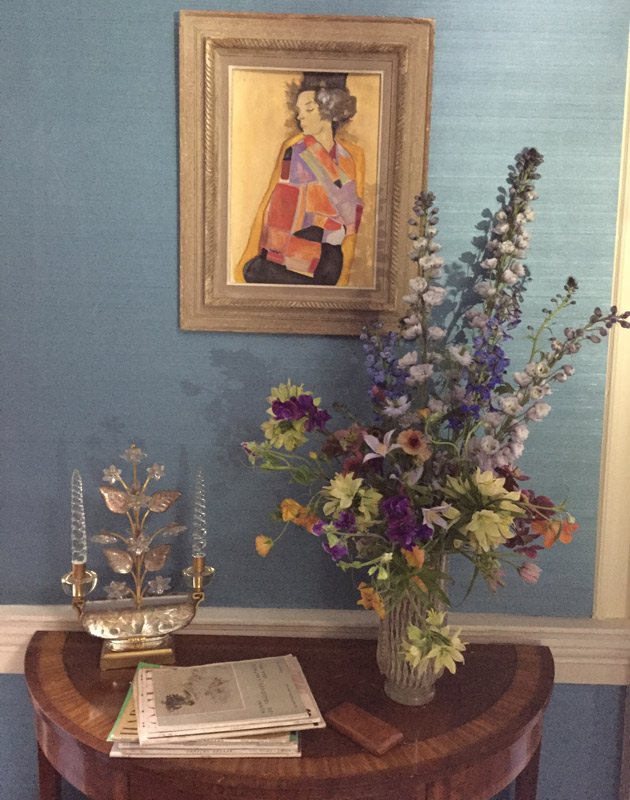 Arrangements were created to coordinate with the decor.

Were you given specific instructions about the floral arrangements?

Almost all the locations required some floral arrangements. The House of Woodcock was incredibly important to get right. The style of the flower arrangements for this set had to be informed by the taste of Reynolds and his couture designs. They also needed to complement the interior decoration of the house. In test shoots, we tried various floral design styles. We used English garden style flowers arranged in a loose but considered way. This style of floral arranging—credited to Constance Spry—would have been the height of good taste in 1950s English society. I worked briefly with the director to get the scale of these arrangements right. The final decision for the look of these florals was made by Daniel Day-Lewis. For Owlpen Manor, the flowers were given a more spontaneous appearance, as if the housekeeper might have arranged them. All the flowers used in the film had to be true to the season in the script, so at Owlpen I used homegrown hellebores and was able to cut winter flowering branches, greenery, snowdrops, and primroses from the gardens there. The wedding of Reynolds and Alma was a wonderful opportunity to create a bouquet, hair piece, and boutonnieres of the period, referencing Alma’s character and taste.

What sort of research on floral arrangements in 50s fashion salons did you do?

Initially I went to the Victoria and Albert Museum in London as they have a superb fashion archive. There I researched the leading haute couture designers of the period—Dior, Balmain, Balenciaga, Charles James, Norman Hartnell, and Hardy Amies. I also had a reasonable amount of knowledge having studied for a degree in fashion design at Saint Martin's School of Art and having worked at the atelier of one of our most iconic British designers, the late Jean Muir. It became clear that fresh floral arrangements were de rigueur in haute couture fashion houses, embellishing the style and taste of the establishment. Arrangements were displayed in the main reception areas and the salons where private clients were wooed, but never in the atelier for fear of damaging the gowns. For the scenes where Reynolds presents his new collection at the House of Woodcock, the director requested simple arrangements. I put together vases of seasonal Pussy Willow branches cut from my garden. Their skeletal appearance and upright habit complimented the feel of the drama. 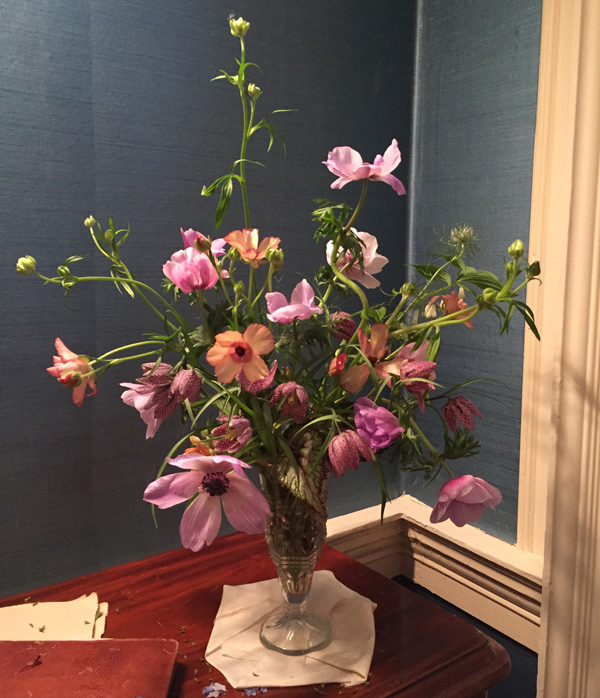 Sophisticated arrangements for the House of Woodcock.

It was inspiring. I was in awe of the level of attention to detail. We were an intimate and close-knit team, all producing our creative best to realize the vision of Paul Thomas Anderson. On location, space and time were at a premium. At the House of Woodcock location, I had a small cold workroom in the basement with no natural light—similar to the reality of the time. There were always flowers on set and often last-minute requests which meant super-fast turnarounds. I was usually first to arrive, having been to the flower market in early morning, and often the last to leave. 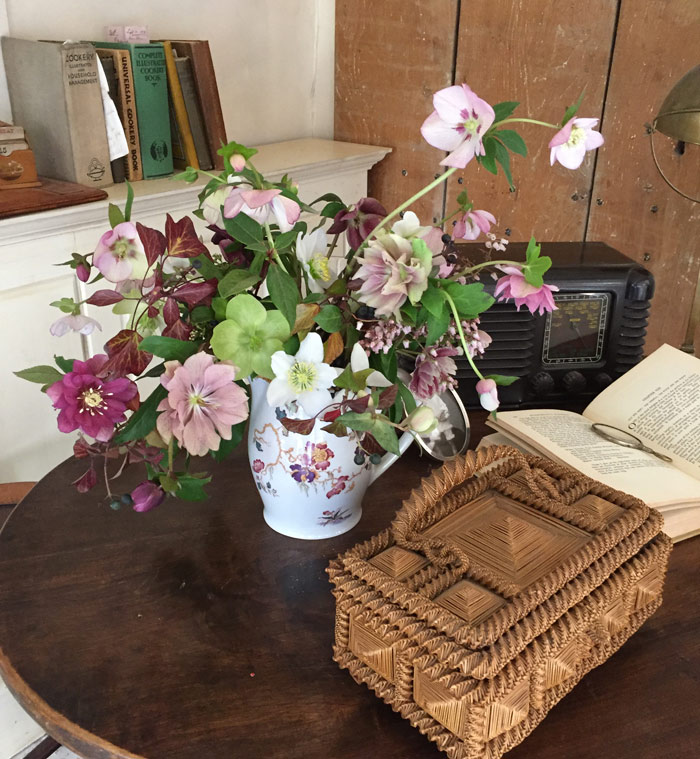 The simple arrangements for Owlpen.

You not only handled the floral arrangements, but also got cast as the florist in the film.

The director often likes to include genuine technicians as opposed to actors in his movies. It was a very funny experience. I was unexpectedly called up from my basement workroom, thrust into a full costume fitting, then rushed into hair and makeup. Within the hour I was ready, given a pair of scissors and positioned on set next to one of my flower arrangements right in front of the camera. I was rather relieved to see that the only glimpse you have of me in the film is hidden behind a large moving arrangement of pink blossom that I carry through the parlour.

Do you feel a sense of pride when you see the film?

It was the most creative time, working with the very best in the business. I am humbled, proud, and thankful to have been given the opportunity to work on this exquisite and captivating film.