Meet the artist, writer, and illustrator behind one of Suzy's favorite library books

In our new series Behind The Credits, we’ll introduce you to some of the amazing people and unusual jobs which help get a movie made. For our first post, we talk to David Hyde Costello, the children’s book writer and illustrator who was chosen to create one of the book covers in Wes Anderson’s Moonrise Kingdom.

In the movie, when Suzy (Kara Hayward) and Sam (Jared Gilman) run off together to the cove of Moonrise Kingdom, each packs their suitcases with what matters to them most. Sam has his wilderness gear. And Suzy has brought along her phonograph, cat, and favorite library books. While none of Suzy’s books actually exist, the filmmakers asked six world-class artists and illustrators to come up with covers that would suggest that they were real young adult editions from the 1960s. To create the cover for Shelly and the Secret Universe, the filmmakers reached out to David Hyde Costello, a writer/illustrator famous for his Little Pig series of children’s books. We spoke with Costello about illustrating the cover of Shelly and the Secret Universe, why he loves creating children’s books, and what kind of movie he would like to make.

Watch Moonrise Kingdom now on iTunes or at Amazon.

"I’m on your side" clip from Moonrise Kingdom.

How were you assigned Shelly and the Secret Universe?

The production designer Adam Stockhausen was my point of contact. He told me the title of the book and sent me some samples of illustration styles from the mid-60s.

Were you ever told what Shelly and the Secret Universe was about?

I didn’t know anything about what the book was supposed to be about until the marketing team put together some book videos for the titles.  Wes Anderson envisioned a girl on a balance beam with an amulet around her neck. Then I sent sketches to Adam Stockhausen and he showed them to Wes Anderson, and Adam wrote back to me with notes. 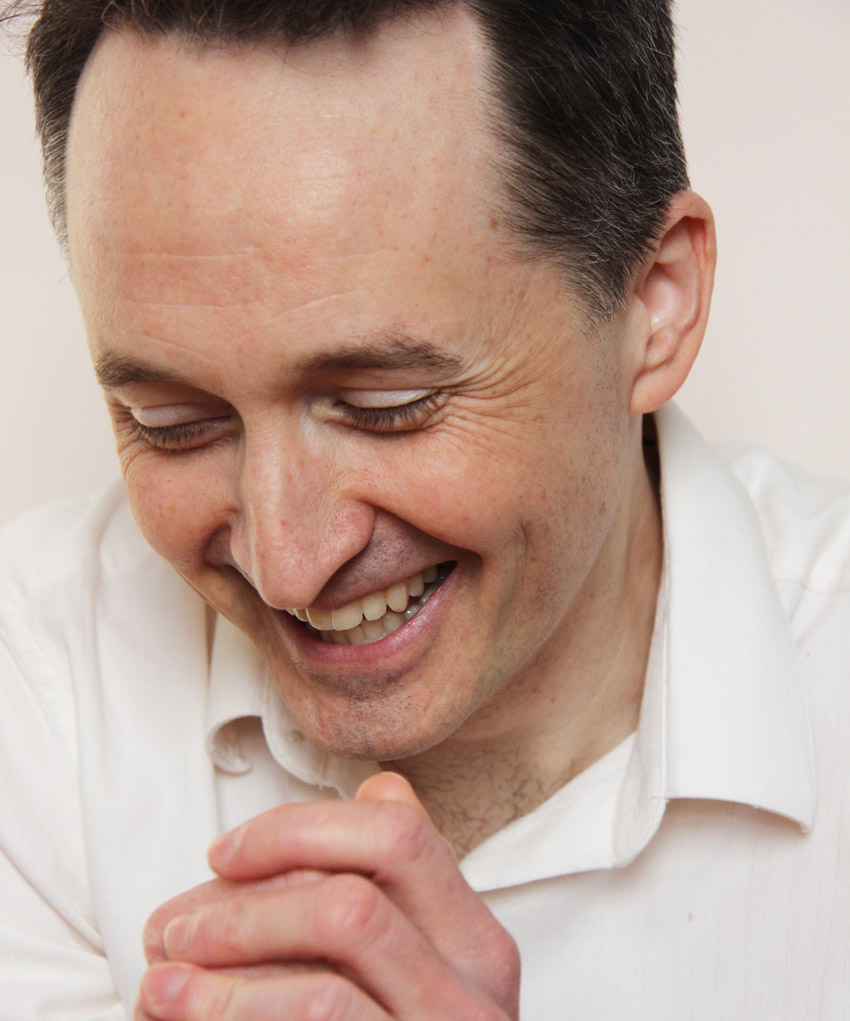 Did you know which other artists would be illustrating book covers?

I had no idea who the other illustrators were, or what the other books were. Actually, I didn’t even know the books were going to be such an important through line in the film. I attended the premiere in Rhode Island, and I remember thinking as I sat down in the theater, “I wonder if my book cover made it into the final cut.” And then there it was—huge in the opening scene! It was very fun to see, and especially gratifying to see the illustrators get a special mention in the credits at the end.

What was the response from your book cover for Shelly and the Secret Universe?

When the film came out, someone sent me a photo of Kara Hayward (the actress who played Suzy Bishop in the film) on the red carpet at Cannes carrying a clutch that had been designed to look like Shelly and the Secret Universe. It was fun to see a piece of artwork I had made take on a life outside its original form. 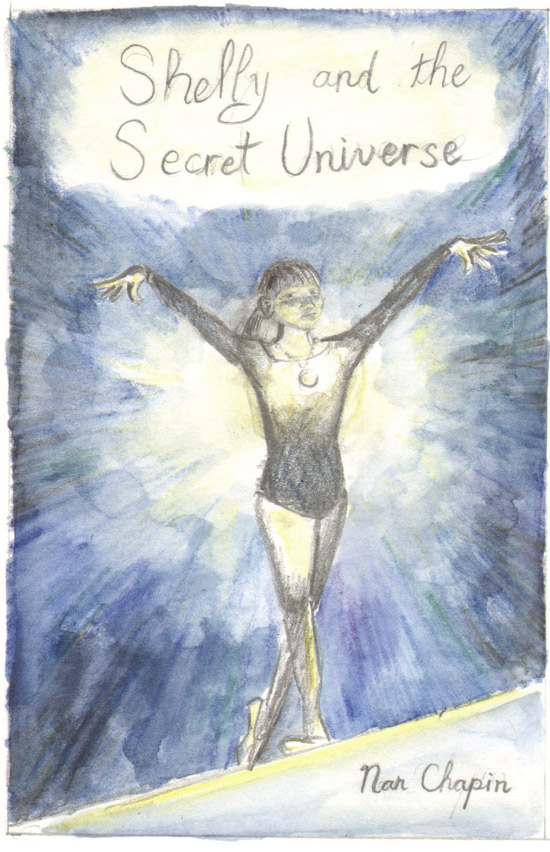 Sketch for the cover of Shelly and the Secret Universe.

I often describe my current career by saying I do all the same things I liked doing when I was a kid—I just do them now with an adult skill set. I was always drawing throughout my childhood, and often what I was drawing was a character or scene from some story that was emerging (frequently through the act of drawing) in my imagination. I don’t remember exactly when I understood that the picture books my parents read to me were made by real people and that ‘author and illustrator’ was a job you could have as an adult. I remember thinking when I graduated from college, “Well, I guess this is the part when I start sending stuff to publishing companies.”

With kids, how can you tell if your book is a success?

One of the things I like most about making art for kids is that you know where you stand with them. I do a lot of visiting author/illustrator programs at schools and libraries, and it is not hard to tell if an audience of children is interested in what you are offering. Adults will sit politely listening (most adults, that is!) and it is much harder to read their internal reaction to whatever you’re presenting. Kids will simply stop paying attention to you if they are not into it.

You have also painted scenery for different films.

After getting an apprenticeship as a scenic artist at the Hartford Stage Company, I met other freelance scenic artists who were working in the film industry. I eventually joined the New England Scenic Artist’s union (which later merged with New York). As it happened, right when I joined, a wave of movies started coming to New England. The first big film I worked on was Amistad. Soon after that came Civil Action, Meet Joe Black, and many others. It wasn’t long before I was part of a network of scenic artists in New England and eventually in New York. Painting scenery, if done well, is usually an anonymous job. But scenic design is so much a part of Wes Anderson’s films that my colleagues who worked on Moonrise Kingdom felt a rare pride at being part of what made that movie what it is. 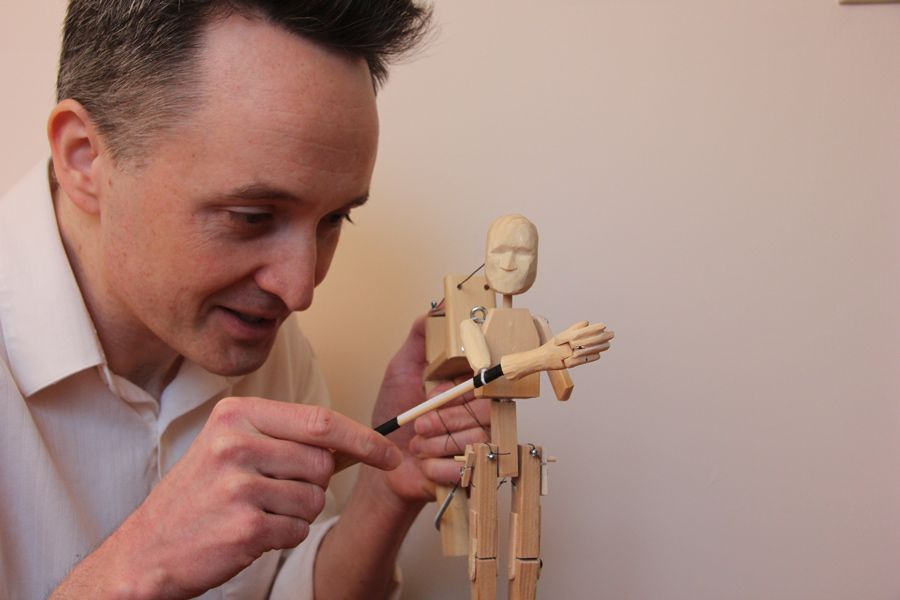 You have created some beautiful short videos with your puppets. Would you ever want to make a film yourself?

Absolutely! In fact, I’m trying to steer my career more in that direction. At the moment I am working on a very fun project. Historic Hudson Valley, which manages the Washington Irving estate in Tarrytown, NY, has hired me to create a 25-minute video shadow puppet show of The Legend of Sleepy Hollow to be made available online this fall. When that is done, I’ll get back to building a carved wooden fairy puppet I’ve been designing. I have been thinking a lot about how different the world would look if humankind had made different (better and kinder) collective choices over the millennia. Fairies are a useful device for looking at a parallel timeline, and asking, “What if we had done this better? What if we had gotten it right?” Whether it's my picture books or puppetry or film, it’s an enticing puzzle to think about how to deal with big questions in children’s art.

Stay tuned for future Behind the Credits posts and tell us on social media what film jobs you would like to learn more about.