Behind The Credits: Adam Mendez, Foley Mixer, The Outfit & The Northman

Foley artists are among the oldest and most unsung cinematic artisans. The simple sounds they create—from a footstep to a swinging branch—give the film a sense of realness and depth. As part of their team, the Foley mixer creates the perfect blend of noises that work alongside the score and dialogue to enhance the film. For The Outfit and The Northman, Foley mixer Adam Mendez applied his experience and craft to help create two different effects. For The Outfit, Mendez blended the precise, distinct sounds suitable for a chamber drama. For The Northman, he helped smooth out the waves of natural noise that made up the Viking landscape.

As part of our Behind The Credits series, we talked to Mendez about his work. In his 15 years, Mendez has worked on such different films as One Day and 1917. We spoke with Mendez about what his job entails, what makes a good Foley mixer, and what drew him to work in the film industry.

Can you explain what a Foley mixer does?

Foley is the process of capturing live sound that is tailored to images on the screen. The Foley artist performs these sounds and the Foley mixer (which is my role) captures and augments them so that they blend imperceptibly with the images on screen. That’s the goal, anyway! 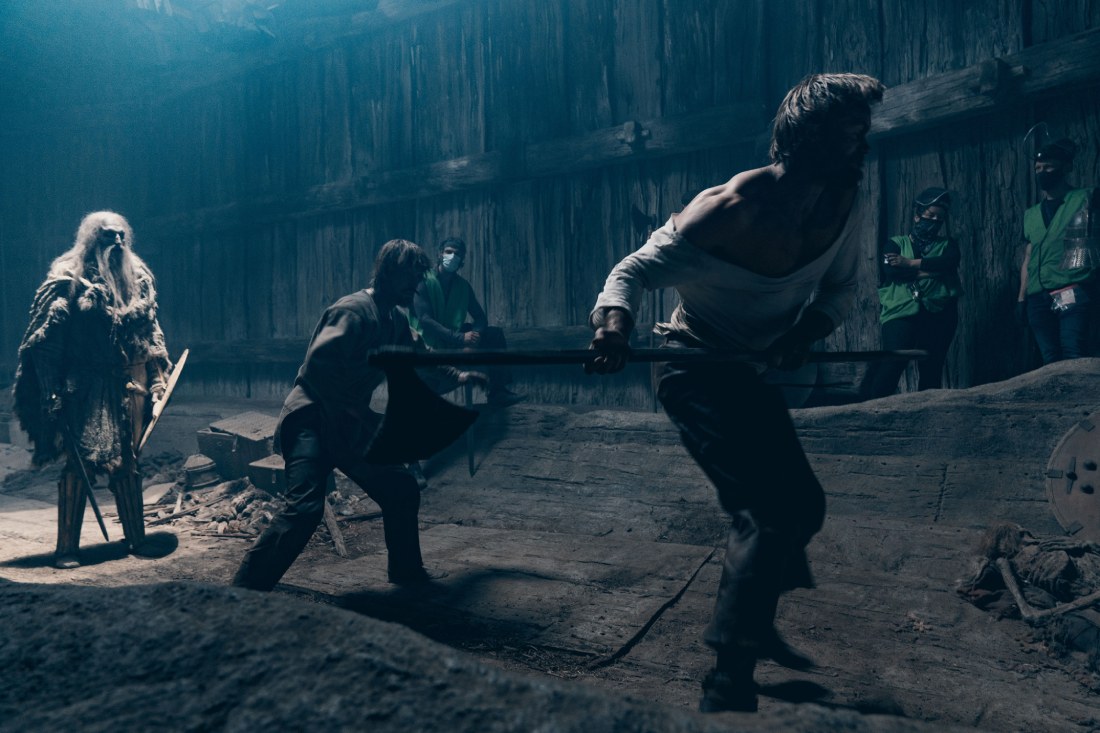 Alexander Skarsgård on the set of The Northman

You served as Foley Mixer on The Outfit and The Northman. Can you talk about what kind of sounds your team created for both?

Time is always the greatest challenge. You can pretty much achieve anything with enough time. For The Outfit everything had to sound completely invisible, so we had to work on matching the shoes and surfaces so they blended in with the sync sound perfectly. The Northman was very different. Most of the time they’re on grass or mud so the sounds there had to be augmented and pumped up so they could be heard in the appropriate places.

You’ve been working in film for about 15 years. How did you get started working as a Foley mixer?

I’ve been recording Foley for around 15 years. I started out by listening to what re-recording mixers didn’t like about the Foley they were getting and seeing if I could do better for them.

What has been most gratifying to you as a Foley mixer?

My proudest moments in the job come from when our little crew has been up against a huge task and struggled—perhaps even bickered—yet finally managed to produce the recordings the sound team needed to complement their work. The Northman, which we shot with Kevin Penney, was like that. Intense days trying to get specific details into the sounds. Kevin has a great ear and really drove us hard. It was an awesome project to be part of.

What makes for a good Foley mixer?

You have to be able to listen as objectively as possible so you can critique your own work. This is, of course, impossible but you have to try. You can’t get attached to any of the work as none of it is for you—it’s all for the sound crew, mixers, director, and, ultimately, for the good of the film.

Johnny Flynn, Alan Mehdizadeh, and Zoey Deutch in The Outfit

Who are people in your field you admire?

I admire Glen Gathard’s recordings, and have always been in his shadow really. I got a lot from Nicolas Becker who showed me other ways to look at the process. The mixer he was working with at the time, Philippe Amouroux, was very generous with his advice and his time. Hugo Adams pushed me to do better from an early stage in my career. I wouldn’t have gotten here without him.

Were there particular films that made you want to work in film?

James Cameron’s Aliens really drew me to sound. From the first scene where they cut into Ripley’s escape capsule until the end of the film, I was gripped. I used to imitate those sounds with my voice. Still do sometimes. Ivan Reitman’s Ghostbusters was a perfect movie for me across the board when I was a kid.

If you weren’t a foley artist, what would you like to do?

If I didn’t have to earn money, I’d just like to help out by doing something either socially or environmentally based.

It’d be really boring. I’m not sure I have the attention span to make a whole movie.