Happy Together: Directing The Comedy Brian And Charles

An interview with filmmaker Jim Archer

In his comedy Brian and Charles (in theaters on June 17), Jim Archer is tasked with the daunting job of directing man and robot. Brian (David Earl) is an inventor in North Wales whose isolation and loneliness spurs him on to invent a companion, a robot named Charles (Chris Hayward). As Brian helps his invention navigate the strange, new world he has been bought into, the two find their relationship of creator/creation morph into something richer and more comic.

Working intimately with actors/screenwriters Earl and Hayward—who created the core characters—Archer brought their story to life, first in an acclaimed short movie and then in a feature film. As the odd and wondrous relationship between these two blossoms, Archer creates “a mockumentary-style comedy [that] is sweet, funny, weird, and heartwarming,” exclaims Vox.

We spoke with Archer about how the story and characters developed, how he learned to direct a robot, and what makes the film so memorable.

Get tickets for Brian and Charles now. 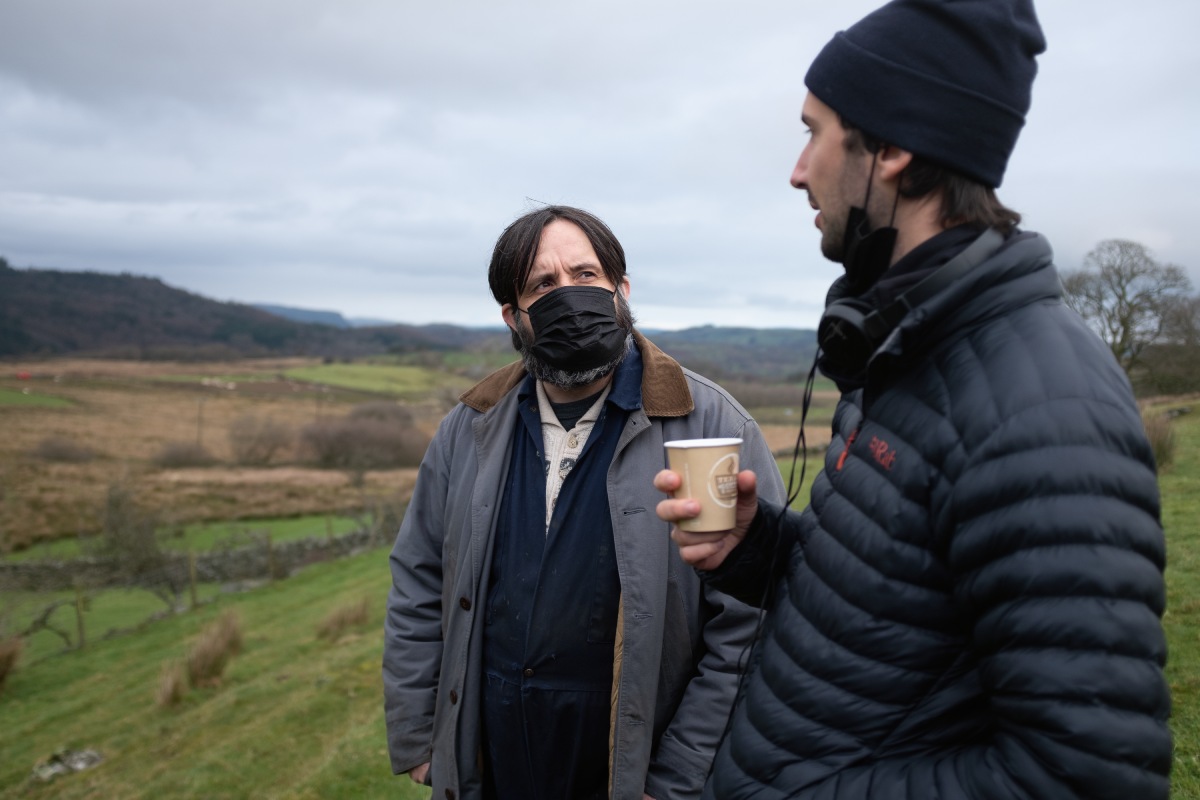 Jim Archer on the set of Brian and Charles with David Earl.

You make your directorial feature debut with Brian and Charles. How did you get involved with the project?

I knew the producer Rupert [Majendie] and Chris already through live comedy. I hadn't met David before. At the time, I’d made a few short films that parodied the documentary format. I was into the world of those overly art docs. Rupert gave me the script for Brian and Charles and I loved it. I was aware of those figures as live characters in the comedy circuit, but the script was so heartfelt that it surprised me. The script was exactly the kind of humor I like—comedy with emotion.

When did you decide to transform the short film into a feature?

I don’t know that we really seriously considered it until Film Four told us they were interested in the idea. When we were shooting the film, we definitely talked about making a feature. There was such a strong, positive reaction when the short came out. People really loved it and reviews were spiraling up. I think that is when we thought maybe there was something more here. When Film Four offered us a script deal, that was it.

What changed in turning the short into a feature?

It is all about softening the story. In the comedy stage version, Brian's backstory is completely different. He’s like a bad stand-up comic. He can be a little crude and doesn't really understand how to do a show. That is sort of the joke. In adapting that show to a film, we had to build the character up from new. We carried over David's voice and mannerisms. But because David is such a brilliant actor, we could bring in more nuance and empathy.

Why did you use the documentary format?

When we made the short, we decided early on to make it a doc. We filmed it for two days. Shooting like a doc was the easiest — and least expensive — way to do it. With the feature, I originally thought we shouldn't make it like a documentary. We should elevate it and make it a proper narrative comedy. But as we developed it, we realized how important it was to have Brian explain himself to the camera. When he tells the camera how he’s fine and nothing is wrong, it is so much easier to read between the lines as a documentary. You can see between every word that he is lonely and sad. Also, we were all excited to try something new with the mockumentary format. No documentary made today looks anything like The Office. There are a lot more drone shots and ambient music.

Stories of man and robot are part of a fascinating tradition. Were there films or books that you drew on for inspiration?

Interestingly, David, Chris, and I all looked at different things. David was interested in indie docs like American Movie and older British docs from the 80s like The Estate, which is about council estates. Chris was looking at stories like E.T. and examining that sort of narrative arc. And we were also thinking about Wallace and Gromit. When we were at Sundance, people kept asking about Frankenstein, especially in the scene where Charles comes to life with a lightning storm in the background. Weirdly we never looked at Frankenstein. Obviously that connection was somehow implanted in our brains from pop culture but we never consciously registered it.

What was the hardest part of directing a robot?

For me, it was not cracking up. Charles is so funny, so to keep a straight face on set was really difficult. Even when we were not filming, we treated Charles like Charles. All of the crew really cared about him and acted like he really was this simple robot.

Was shooting in Wales important to telling the story?

We shot the feature in the same area we shot the short film. I loved it so much that I just wanted to go further into Wales. I loved the area’s sense of isolation as well as the fairytale feel it provided the story. It is such a beautiful area that it gave the film a whole new cinematic layer.

Charles’ costumes are hilarious. How did you come up with them?

Chris invented the first costume. After that it was all about making tweaks but keeping the heart of Charles in those changes. With a bigger script, we needed to find a logic to the choices Charles makes. The costume designer, Gabriela Yiaxis, was amazing. She would create all these different versions, some in which his clothes were really great, almost too good. Then we would rein it back to fit the story.

I would just like audiences to be uplifted. There are many different interpretations of Charles. At some points, people are laughing, and at other places, the film brings people to tears. But ultimately, I want people to leave the theater feeling happy.