The Academy recognizes Emerald Fennell and her debut feature, as well as EMMA.’s cinematic craft

Priyanka Chopra Jonas and Nick Jonas got up very early this morning to announce the nominees for the 93rd annual Academy Awards®. We are thrilled that both Emerald Fennell’s Promising Young Woman and Autumn de Wilde’s EMMA. were among those awarded with nominations. On Sunday, April 25, the winners will be announced at this year's ceremony, which will take place in-person at Los Angeles’ Union Station and the Dolby Theatre. It will air live on ABC at 8 p.m. ET/5 p.m. PT. 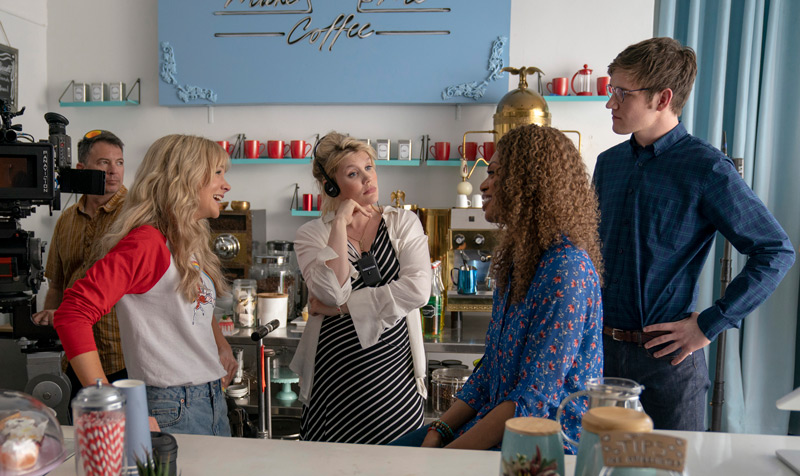 This year, the Academy shined a spotlight on Emerald Fennell’s powerhouse story of a woman seeking justice with five Oscar® nominations, including Best Picture (Producers: Ben Browning, Ashley Fox, Emerald Fennell, and Josey McNamara). Fennell herself was honored with nominations for Original Screenplay and Directing. The film’s star, Carey Mulligan, was nominated for Actress in a Leading Role. And finally, the film’s editor, Frédéric Thoraval, received a nomination for Film Editing.

A wonderfully happy Emerald Fennell responded to her three Oscar® nominations by saying, "I’m barely able to speak in coherent sentences after this unbelievable news. I am so incredibly grateful to every single wonderful person who worked on Promising Young Woman, the greatest most hardworking and talented cast and crew in the world. For their work to be honoured by the Academy means so much, and I am especially thrilled for Carey, whose extraordinary genius made this film what it is, and for Fred whose dedication made the impossible possible, for their individual nominations. To be part of this historic year for the Academy, alongside so many exceptionally gifted filmmakers means more than I can possibly describe, and I'm particularly proud to be nominated beside the amazing Chloe Zhao. There have been so many exceptional female filmmakers this year, making such beautiful, inspiring, challenging, varied work, that I am truly honoured and grateful to be among their number. Thank you to the Academy, Focus Features, FilmNation, LuckyChap, my whole immensely patient and wonderful team. I will stop crying eventually, but not yet."

On hearing of her nomination, Best Actress-nominee Carey Mulligan exclaimed, "I’m absolutely elated this morning, and I am so honoured to be in such esteemed company across all categories. Thank you to the Academy for embracing this story which means so much to me. It’s all thanks to my dear friend — the fearless, hilarious, bold writer and director Emerald Fennell and the incredible cast and crew she assembled. We all signed on because we believed wholeheartedly in her vision, and I’m so grateful to her for inviting me to be a part of it." In 2010, Mulligan won the Oscar® for Best Performance by an Actress in a Leading Role for An Education.

In response to hearing that Promising Young Woman was nominated for Best Picture, the film's producers — Ben Browning, Ashley Fox, Emerald Fennell, and Josey McNamara — expressed jointedly, “What a morning! It’s been a long and exhilarating journey and we are blown away by the recognition of Promising Young Woman. We couldn’t be more excited to make history in the directing category and are thrilled that Carey Mulligan and Fred Thoraval’s work has also been recognized. It was an honor to bring Emerald’s completely original and uncompromising vision to life. Thank you Academy!”

Promising Young Woman's editor Frédéric Thoraval greeted news of his Oscar® nomination by exclaiming, "How is it possible to describe your mindset after a news like this? I’m incredibly happy, speechless, excited, and overwhelmed to be honored by the Academy alongside so many impressive filmmakers. Everybody in the fantastic cast and crew Emerald had put together was working with only one aim: serving the vision she wanted put on screen. It’s her passion, her energy, her unique perspective on the world that lead us during this amazing journey. And I’m so grateful she allowed me to be part of it and make an impossible dream come true."

Autumn de Wilde’s gorgeous adaptation of Jane Austen’s EMMA. was recognized for its sheer beauty and cinematic craft. Alexandra Byrne was nominated for Costume Design. (Two years ago, she was nominated for her work on Mary Queen of Scots). Byrne exclaimed, "I’m thrilled and proud to be nominated. It’s a great affirmation of our work — for all my team. Many of us are currently working together again, on a very different project, and it brings smiles to remember working closely and collaboratively in a time before masks!" In addition, Marese Langan, Laura Allen, and Claudia Stolze were nominated for Makeup and Hairstyling.