When Fernando Meirelles’ adaptation of John le Carré’s The Constant Gardener opened in theaters on August 31, 2005, it proved a revelation. In the film, Justin Quayle (Ralph Fiennes), a soft-spoken British diplomat stationed in Kenya, goes to any length to uncover the truth behind what happened to his wife Tessa (Rachel Weisz) in the African wilderness. Moving from post-colonial garden parties in Nairobi to the European headquarters of multinational pharmaceutical corporations, the film unravels a tale at once profoundly intimate and global in scale. “That it offers passion, betrayal, gorgeous cinematography, social commentary, stellar performances and clever wit puts it in a special category near perfection,” exclaimed USA Today. In addition to Rachel Weisz winning an Academy Award® for Best Supporting Actress, the film was nominated for Best Film Editing (Claire Simpson), Best Original Score (Alberto Iglesias), and Best Adapted Screenplay (Jeffrey Caine).

For Caine, who had penned the screenplay for the James Bond extravaganza GoldenEye, The Constant Gardener was more than a thriller. Having lost his own wife in 1995, he knew all too well the love and sorrow at the story's heart. With the The Constant Gardener turning fifteen, we spoke with Caine about writing the acclaimed screenplay that, as Rolling Stone notes, "put a human face on John le Carré’s novel of sex, lies and dirty politics in modern Africa."

Watch The Constant Gardener now on iTunes or at Amazon.

The official trailer for The Constant Gardener.

How did you end up writing the screenplay for The Constant Gardener?

I knew Sarah Golding, the script editor for the production company Potboiler who acquired the rights to the book. Sarah told me I was on the shortlist to adapt the book. She was right to pick me. She knew that I had personal experience of the kind of grief that Justin suffers in the story. She knew I could bring in my personal history and emotion into the writing. Then I had lunch with John le Carré, Mike Newell (who was set to direct the film at that time) and the film’s producer Simon Channing Williams. I was there to impress le Carré, who being a writer of note had the right to approve whoever adapted his novel. I assume I did, since I was hired. 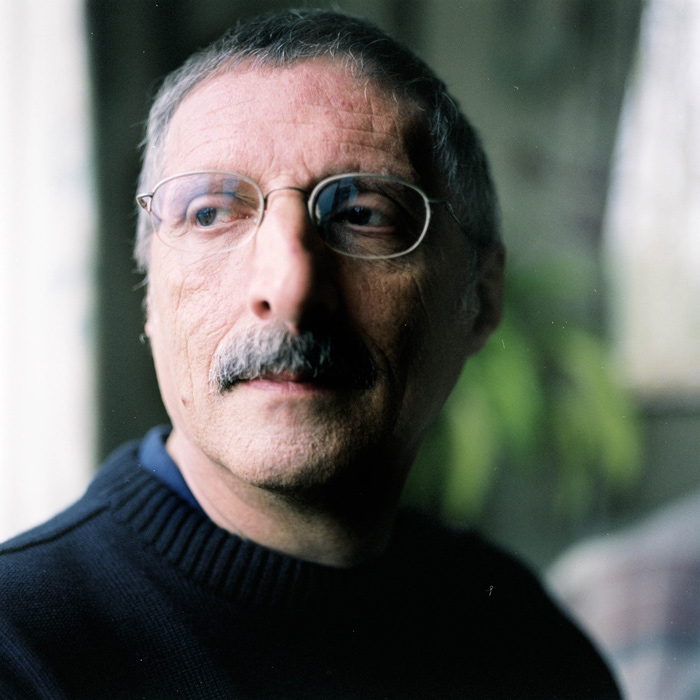 In adapting the novel, did you do additional research either into the pharmaceutical industry or the African locations?

Not that much. Interestingly, my physicians, a husband and wife team at the general practice I went to, had spent a year or two in Kenya. They gave me a good sense of the place and the state of medicine there. I acknowledged them in the film's credits. But really most of the research was already there in the novel. Being such an experienced writer, le Carré really knew his stuff.

Your adaptation has been praised for keeping the novel’s non-linear structure. What did you want to change from the novel?

In the book, le Carré has a couple of British cops go to Kenya to investigate the death of Tessa and they give away the game very early in the story. Le Carré did that deliberately. It was his way of saying, "Look. I'm not that interested in the thriller aspect. This is really a polemic against the way British companies exploit Third World countries in testing for drugs. You don't need to worry about how the story plays out. I'm going to tell you all the answers up front." In a movie, you can't do that. When I pitched my adaptation, the first thing I told them I wanted to do was take out the cops.

What was the main focus of the story for you?

My job was to set Justin on the trail of uncovering what happened to Tessa. Once that happens, the film takes off as a thriller and works as a thriller. We originally had an entire sequence in Canada. That was all in the book. We filmed it but never used it. Fernando felt that it slowed the movie down just when it needed to speed up. He was absolutely right about that. 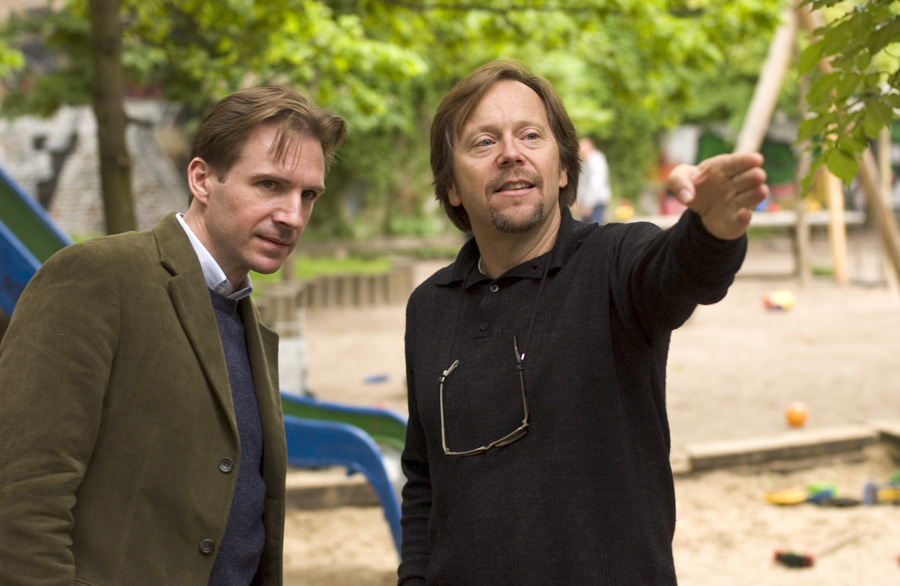 Fernando Meirelles directing Ralph Fiennes on the set of The Constant Gardener.

When Meirelles became the director, did it help to have a non-European perspective on the story?

Enormously so. That’s why Simon Channing Williams wanted Fernando to be the director after Newell left the film. Williams felt a Third World perspective would give the film an added texture. While Fernando had made his very successful Brazilian film City of God, he didn’t know anything about the traditional old-school-boy world of British diplomacy in the former colonies. It was as foreign to him as was Kenya. But what he did understand was the Third World. 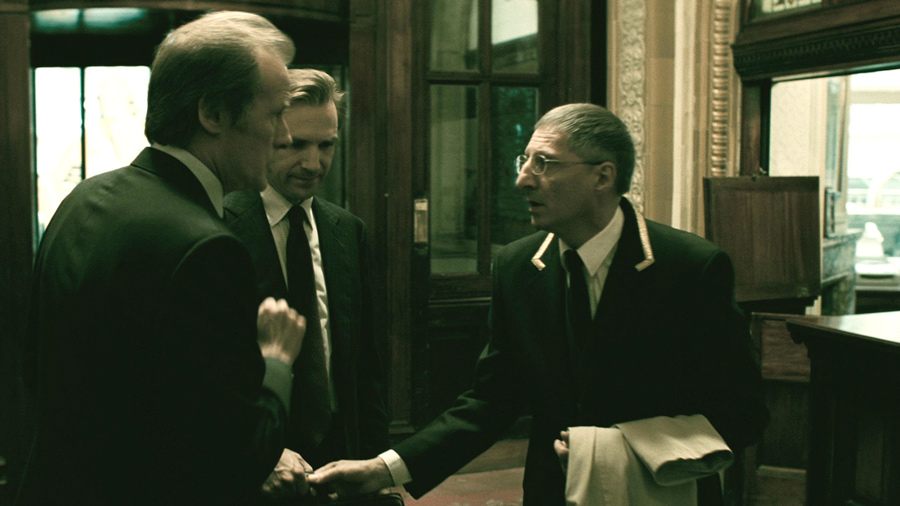 Bill Nighy, Ralph Fiennes, and Jeffrey Caine in in The Constant Gardener.

How was it working with Meirelles?

It was great. I am not quick to praise directors. I always assume they presume too much and they try to take over your role in writing the script. Fernando never did any of those things. He was a great director to work with. He brought his own wonderful skills and insights to my screenplay. The Constant Gardener would not have been the same film without him.

You also appear in the film. How did that happen?

I have always been an amateur actor. So I asked Williams if I could have a speaking role. He gave me this part as a club doorman. We found a club and the doorman loaned me his jacket. After the scene was filmed, the doorman came up and told me nobody would have known that I was not the real doorman.

Le Carré said, "I have a great affection for The Constant Gardener because it was actually a film and a book which I can truly say did good. It held the pharmaceutical industry to account.” How do you feel about the film?

I don't know how much influence it has had on the pharmaceutical industry, but as a film, I stand by it. I don't always stand by my films.  I sometimes feel my scripts are spoiled in production for one reason or another. Here I loved pretty much everything about the picture. I love the way it was done and the atmosphere of it. 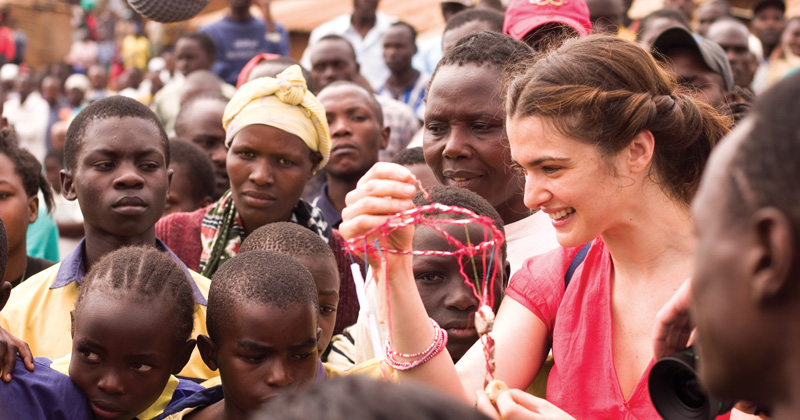 Rachel Wesiz as Tessa in The Constant Gardener.

The film was nominated for four Academy Awards®—

And even more at the BAFTAs.

Yes, it got ten BAFTA nominations. How did that make you feel?

That was very pleasing to us. I wish that Fernando had gotten an Oscar® nod and I was surprised that Ralph wasn't nominated. But overall we were very happy.

Do you still hear from people who have just seen the film?

Fifteen years after the event, people still tell me how much they enjoy The Constant Gardener. Films can be forgotten very quickly unless they become classics. I am not sure that The Constant Gardener has quite achieved that. But it is on its way. Maybe in another fifteen years. But I’m always delighted to hear people tell me that they have just seen it and how much they like it—even love it.