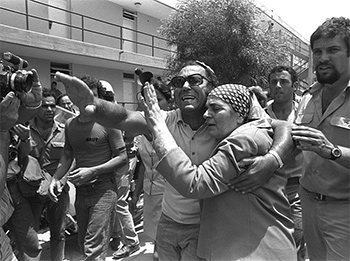 A family is reunited following the surrender of Air France Flight 139. Photo courtesy of Wikicommons.

A gripping political thriller inspired by the true events of the 1976 hijacking of an Air France flight en route from Tel Aviv to Paris, the film depicts the most daring rescue mission ever attempted.

The Untitled Entebbe Project brings the longstanding conflict between Israel and Palestine into focus by recounting the heroic military mission while also exploring the nuanced perspectives of both sides.

Forty years after the event that gripped the world, its consequences are still be discussed.  As The Guardian wrote last spring, "Entebbe would become a byword for military daring...A raid that lasted a total of 99 minutes would live on for decades."