Focus Features has acquired Pope Francis – A MAN OF HIS WORD, the new documentary feature with Pope Francis.

Written and directed by three-time Academy Award nominee Wim Wenders (Buena Vista Social Club, Pina, The Salt of the Earth), the film is only the second co-production that the Vatican has made with outside filmmakers and the first in which a Pope addresses the audience directly, discussing topics such as ecology, immigration, consumerism, and social justice.

“The belief that movies can impact individuals and the world at large is at the very core of Focus Features. We are humbled at the responsibility of planting this film into the global culture so that the thoughts and words of a spiritual leader as inspiring and compassionate as Pope Francis can take root.”

Pope Francis – A MAN OF HIS WORD is a significant nonfiction film, as it is not a biography about the Pope, rather a film with him.

On March 13th, 2013, the Cardinal of Buenos Aires, Jorge Mario Bergoglio, became the 266th Pope of the Catholic Church. As Pope Francis, he has made communication a vital element of the Church and a key component of his remarkable work of reform.

In Pope Francis – A MAN OF HIS WORD, he responds to questions submitted from around the globe. Exclusive footage from the Vatican’s archive shows the Pope on journeys, sharing his ideas and ideals in different parts of the world.

Statement from The Vatican

Msgr. Dario Edoardo Viganò, Prefect of the Secretariat for Communication of the Holy See, said, “Whenever I think of Wenders’ poetics I see before me the angels that feature in Wings of Desire and Faraway, So Close! They are angels that, though perfectly pertinent to both the biblical and literary worlds, have very little in common with the devotional stereotype. Wenders is aware that it is how we view the world that makes it pure or impure: a burden of responsibility we are constantly aware of when watching his documentary works. That’s why the German master was invited to take part in the opening ceremony of the Extraordinary Jubilee of Mercy called by Pope Francis. A meeting that led to the Vatican Television Centre suggesting a film could be made that might describe, for want of a better word, Pope Francis’ approach to the contemporary world, through his answers to a whole range of questions posed by men and women of all origins and extractions. An intense filmic experience, an eyewitness account captured by the film medium that, as was the case for Pope Leo XIII, wants to stand as a bridge and an embrace with men and women of all faiths and cultures and social or political leanings.” 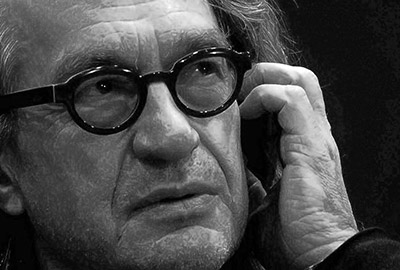 Mr. Wenders commented, “Pope Francis is a living example of a man who stands for what he says. In our film, he speaks directly to the viewer, very candidly and spontaneously. We wanted Pope Francis – A MAN OF HIS WORD to be for all audiences, as the Pope’s message is universal. Through the full cooperation of the Vatican, we were privileged to have several long audiences with Pope Francis, and Focus now joins us in bringing his radical compassion and deep humanism to an audience around the globe.”

Pope Francis – A MAN OF HIS WORD is produced by Mr. Wenders with Samanta Gandolfi Branca, Alessandro Lo Monaco (The World’s Smallest Army), Andrea Gambetta and David Rosier (The Salt of the Earth).