Nine women who are changing the future of cinema

Since 1987, when Congress designated March to be Women's History Month, the National Women's History Alliance has chosen a relevant theme that both highlights past achievements and looks forward to future challenges. This year, the National Women's History Alliance declared the theme of the 2021 National Women's History Month will be “Valiant Women of the Vote: Refusing to Be Silenced," a theme that extends last year's celebration of the centennial of the 19th Amendment, which granted women the right to vote. To celebrate National Women’s History Month this year, we want to salute the remarkable, diverse wave of female directors who have changed the face of cinema in the last few years. From auteurs, such as Sofia Coppola and Eliza Hittman, to debut directors like Emerald Fennell and Robin Wright, these artists have redefined the film landscape by employing innovative cinematic styles, telling new and original stories, and introducing the world to a compelling cast of characters. 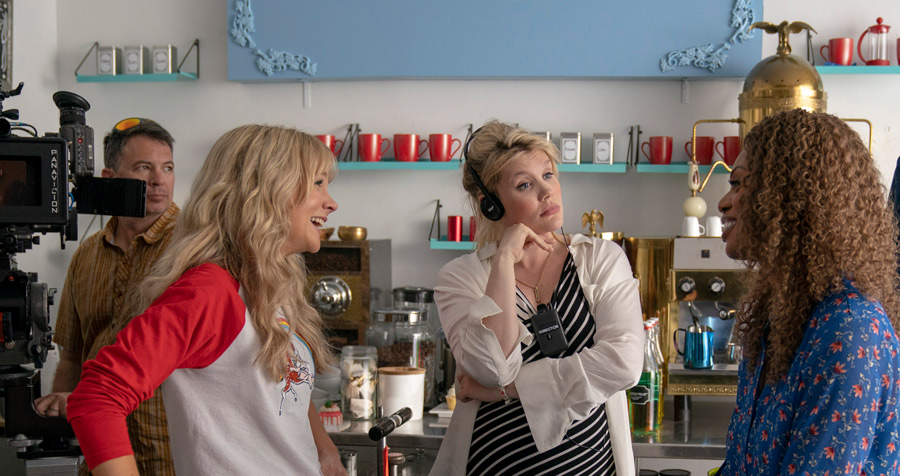 Emerald Fennell on the set of Promising Young Woman with Carey Mulligan and Laverne Cox.

While Promising Young Woman marks Emerald Fennell's debut as a feature film director, she honed her creativity for years as a successful actress and writer. The film, which USA Today calls "a deliciously dark and wonderful combo of style, substance and artfully utilized pop jams," began as a meditation. “I’d been thinking a lot at the time about the way that rage and anger manifests itself, particularly in women,” Fennell recalls. Allowing her thoughts to distill, Fennell created Cassie (Carey Mulligan), a woman who channels her anger about how seemingly "nice guys" ruined the life of her best friend into a wild and unpredictable quest for justice. Told in candy-colored hues with a snappy pop soundtrack, the film nevertheless packs a deeply emotional punch that showcases Fennell's verve as a filmmaker. “It’s so sharply and boldly laid out that its narrative shocks rule the day," exclaims The Hollywood Reporter. "It’s jolting to witness how it refuses to let anyone off the hook." 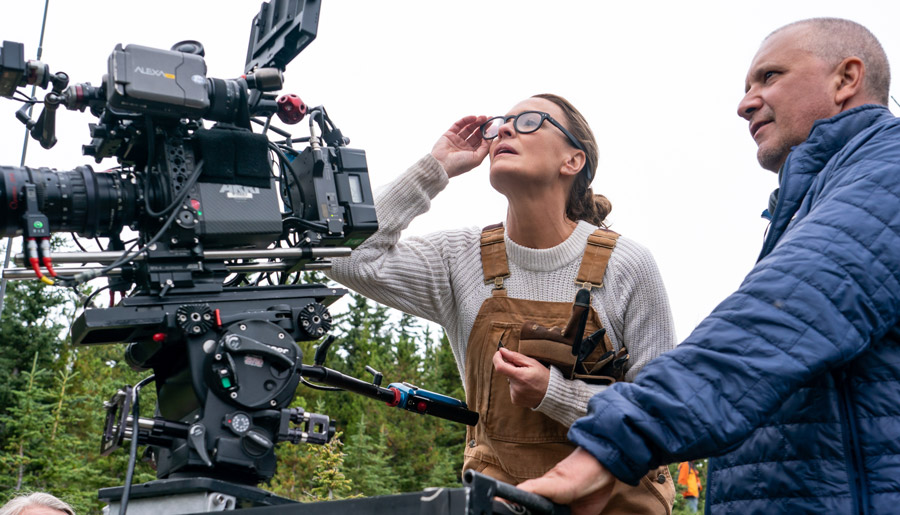 Robin Wright on the set of Land.

As one of Hollywood’s most accomplished actresses, Robin Wright used her time on the sets of films like Forrest Gump, Wonder Woman, and Blade Runner 2049 — as well as her years starring in and directing multiple episodes of House of Cards — to learn the art of filmmaking. In addition to directing, Wright stars in Land, a story about Edee Holzer (Wright), a woman who retreats to the isolation and beauty of the Rocky Mountains to rediscover her humanity. In choosing this tale as her feature film directorial debut, Wright explains, “I wanted to make a film about kindness and human resilience.” Indeed, in watching Edee move from despair to hope by learning how to survive on her own, we also witness her re-kindling her desire to connect with others. In a film so beautiful that, according to The Film Stage, every fifth shot “will take your breath away,” the story never loses sight of its humanity as “Wright the filmmaker wrings out one of Wright the actor’s career-best performances.”

The official trailer for The Beguiled. 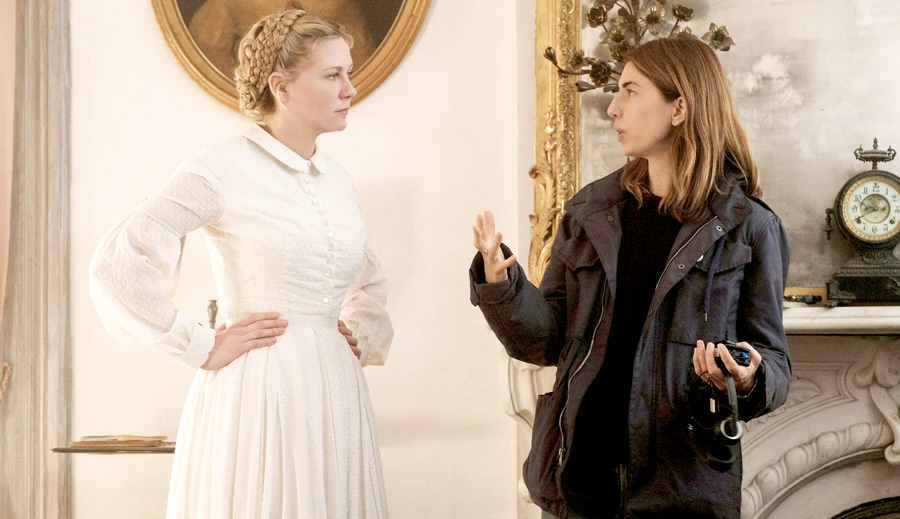 Sofia Coppola directing Kirsten Dunst on the set of The Beguiled.

Sofia Coppola | Lost in Translation, Somewhere, and The Beguiled

When Sofia Coppola’s Lost in Translation opened in theaters in 2003, audiences were taken aback by her stunning new cinematic voice. Salon immediately crowned her as "one of our most gifted filmmakers (of either gender).” In the years since, Coppola has only enlarged and enriched her cinematic vision. Somewhere, which won the Golden Lion at the 2010 Venice International Film Festival, allowed Coppola to revisit aspects of her own life in an impressionistic tale of a Hollywood star (Stephen Dorff) connecting with his daughter (Elle Fanning) in Los Angeles. In her recent feature, The Beguiled, Coppola adapted Thomas P. Cullinan's novel about a Southern girls school that takes in a wounded Union soldier during the Civil War. While the book had previously been adapted as a vehicle for Clint Eastwood, Coppola wanted to tell the thriller in her own unique way. "It was really fun and challenging to see how I would kind of approach the Southern Gothic genre, but still in my own style," said Coppola. Softening the focus and bringing a female perspective to the drama, Coppola nevertheless kept the tale's hard edge. For Sound of Consequence, “Beneath everything that’s beautiful — and The Beguiled is certainly that — something savage and splendid breathes." 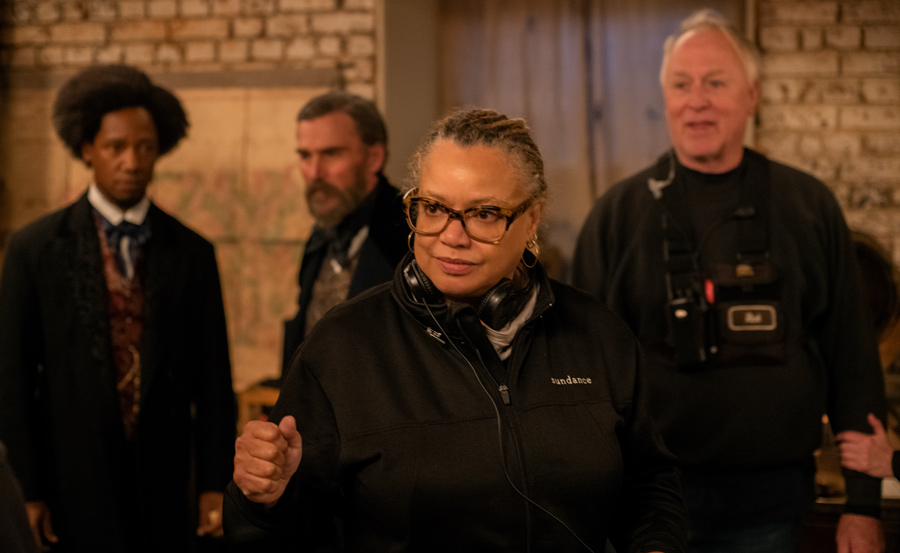 Kasi Lemmons on the set of Harriet.

Kasi Lemmons | Harriet and Talk To Me

As a filmmaker, Kasi Lemmons demonstrates a talent for shining a new and different light on great historical moments. In Harriet, Lemmons dramatizes the life of the legendary freedom fighter Harriet Tubman (played by Cynthia Erivo in an Academy Award®-nominated performance). Pulling Tubman's achievements from the pages of a history book, Lemmons gave this remarkable woman the power and purpose of a superhero. In the film, Harriet's courage feels as vital now as it was back then. For The Guardian, Lemmons' “achievement is to tell a story that does not accept slavery as a tragic and immutable fact, and to dramatize the people who took action against it.” Years earlier, Lemmons brought the same cinematic bravado to Talk to Me, her biopic about the irreverent, Washington, D.C. radio personality, Petey Greene (Don Cheadle). In his life and work, Greene brought the real emotional cost of being an African American man living through the 60s and 70s alive. “I’m very interested in the gray areas of humanity— what people are capable of, both great and terrible,” explains Lemmons. 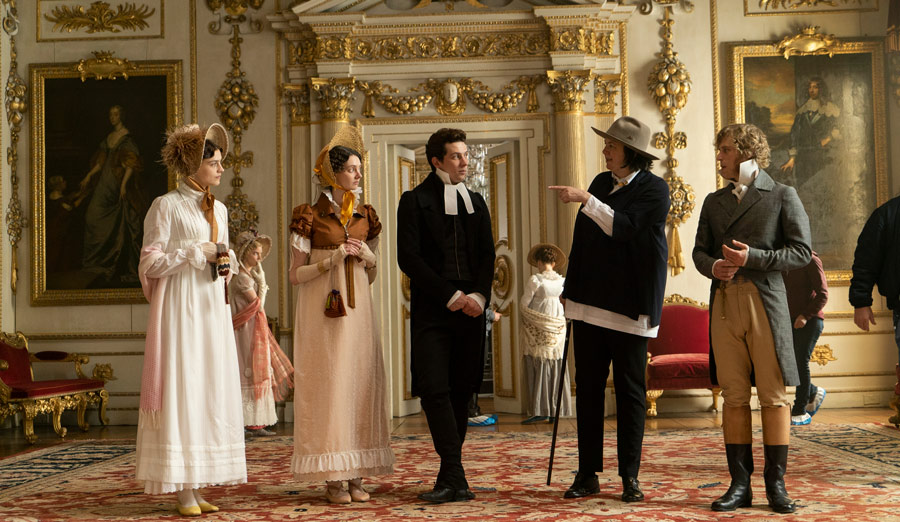 Autumn de Wilde on the set of EMMA. with the cast.

To adapt a classic novel, especially one as beloved as Jane Austen’s Emma, is a daunting task. “If you take what feels right to you about the story and about Emma,” explains photographer-turned-filmmaker Autumn de Wilde, “that’s the most interesting movie you could make.” To show what was most interesting to her, de Wilde invented a dazzling visual vocabulary with which to translate Austen’s witty romantic comedy of manners into her rollicking film EMMA. Casting Anya Taylor-Joy as the title heroine, de Wilde concocts a scrumptious world of fashion and design that evokes Emma’s world of sweetness and light with just enough tartness to make it real. Her adaptation, writes Time Magazine, “feels both modern and authentic in the best way, inviting everyone, diehard Austenites and newbies alike, into its embrace.” 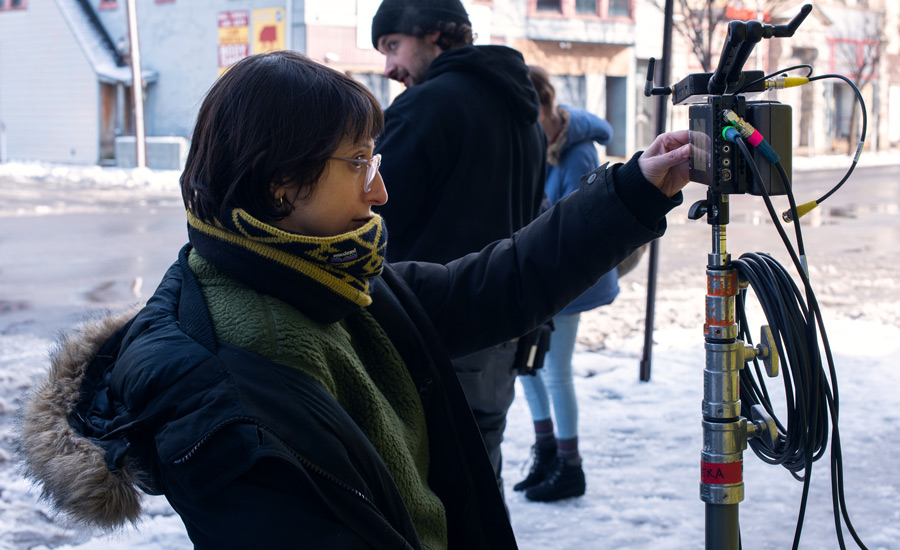 Eliza Hittman on the set of Never Rarely Sometimes Always.

When Never Rarely Sometimes Always premiered at the Sundance Film Festival, IndieWire announced that its writer/director Eliza Hittman has proven “herself as one of contemporary cinema’s most empathetic and skilled chroniclers of American youth.” With an impactful, straight-forward style, Hittman tells the story of Autumn (Sidney Flanigan), a 17-year-old Pennsylvanian who travels by bus to New York City with her cousin Skylar (Talia Ryder) in order to get the necessary medical attention for an unwanted pregnancy. Although told with a spare style, Hittman’s vision for these women’s quest to obtain safe reproductive services feels as large and inspiring as a Greek epic. As The New York Times points out, “Here, a woman’s right to self-determination has become the stuff of a new and radical heroic journey.” Critics and fans have been equally moved by Hittman's vision, putting the movie on over 70 best-of-the-year lists and nominating it for seven awards, the most of any film, in this year's Film Independent Spirit Awards. 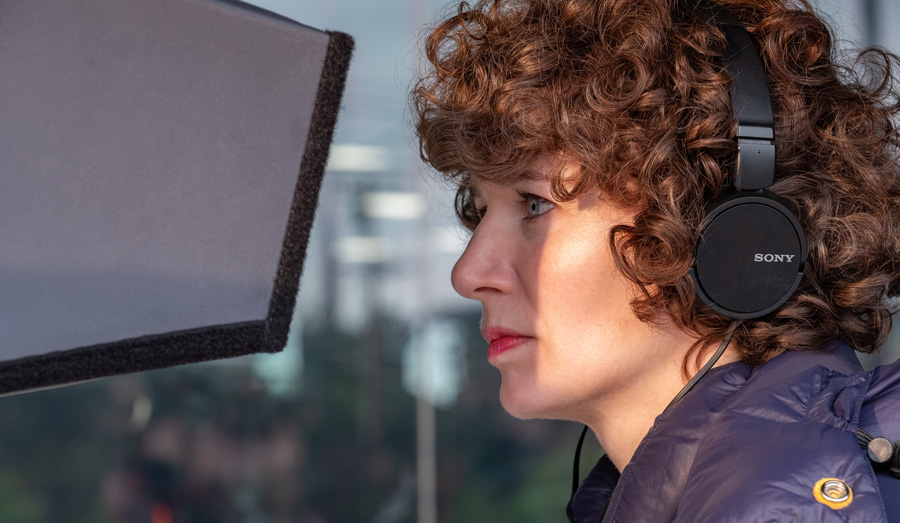 Miranda July on the set of Kajillionaire.

As an artist of infinite imagination, Miranda July needs multiple disciplines (performance art, fiction, recorded music, film, sculpture, and even social media) to express herself. In Kajillionaire, her whimsical film about a family of con artists — Robert (Richard Jenkins), his wife Theresa Dyne (Debra Winger), and their adult daughter Old Dolio (Evan Rachel Wood) — July conjures up a strange, magical world in the abandoned streets of industrial Los Angeles. On reading the screenplay, the film’s producer Dede Gardner recognized how the main character, Old Dolio, embodied July’s artistic spirit. “I was very moved by seeing a walking, talking, sentient young woman...The sort of oddity that she found in the universe; the awe and the horror and surprise.” That aesthetic of awe runs through the film as well. While “Kajillionaire feels like it… is governed by a not-quite-discernible dream logic that is July’s alone,” explains Vox. It is ultimately “a movie about love, and loneliness, and it’s funny and bittersweet and beautiful.”

The official trailer of The High Note. 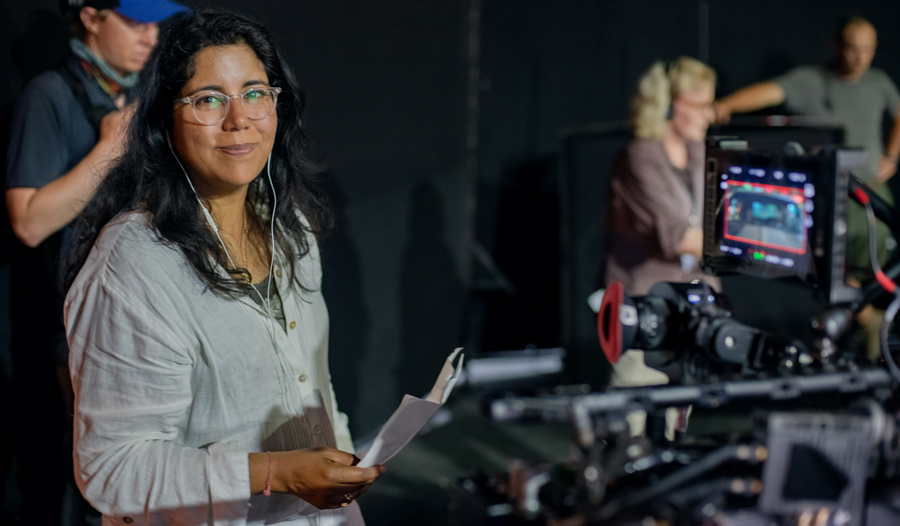 Nisha Ganatra on the set of The High Note.

In The High Note, Nisha Ganatra uses her jubilantly bright style to shed some light on the challenges faced by women in the male-driven music world. At different levels in their careers, Maggie (Dakota Fanning) and Grace Davis (Tracee Ellis Ross) share a mutual desire to make something of  their lives. Maggie, Grace’s personal assistant, dreams of becoming a successful record producer. Grace, a chart-topping pop diva, wants to rediscover her artistic passion. “This is an enchanting and escapist summer movie,” notes critic Claudia Puig, that also “says something about women with ambition.” Indeed, Ganatra hopes her music-filled comedy “inspires a generation of young women to do things. So many movies tell young women to be the star…This one says, 'No, what you really want is to be part of the creative process.'"

The official trailer of The Way I See It. 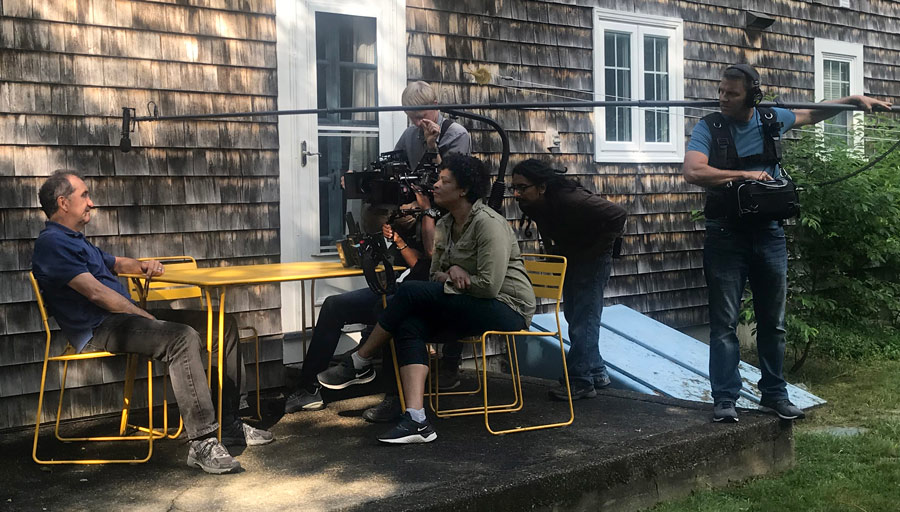 Dawn Porter shooting Pete Souza for The Way I See It.

Dawn Porter | The Way I See It

Award-winning filmmaker Dawn Porter has made a career documenting the lives of people who made a difference, be it African American public defenders working in the South in Gideon’s Army or the staff at the last abortion clinic in Mississippi in Trapped. For The Way I See It, she aligned herself with another image maker, former White House photographer Pete Souza. “My father was a photographer,” exclaims Porter, adding “Pete’s images make a strong political statement, and I am very interested in what motivates people to take a stand for what they believe.” Chronicling both Souza's life and work shooting President Barack Obama’s White House, Porter creates a portrait of a man whose work recording history pushed him to step in front of the camera and make history himself.