Retelling History: Who’s Who in Mary Queen of Scots

An overview of Queen Mary and Queen Elizabeth’s inner circles

Based on a revisionist biography by British historian Dr. John Guy, Mary Queen of Scots depicts the burgeoning clash between Mary Stuart and Elizabeth I, the two ruling queens of 16th Century Scotland and England. At a special Q&A in London in November, director Josie Rourke explained the heart of the story as a “psychological dance between these two queens,” in which the stakes were high and the instigators were many.

Their otherwise complicated relationship was insidiously eroded by the unfavorable context of patriarchal court society. We witness a series of succession-driven power plays and treacherous moves, all fuelled by personal agendas and tangled in an intricate game of chess.

To better understand the architecture and political duality of the Scottish and English Courts, we’ve broken down some of the key players in this web of power and conspiracy.

The second Official Trailer for Mary Queen of Scots

The eponymous character, Mary Queen of Scots, also known as Mary Stuart, has been a well-known yet enigmatic figure in Scottish history. The only legitimate child of King James V, Mary lived most of her childhood and adolescence years in France. When her fleeting first marriage with King Francis II ended with his death in 1560, Mary returned to Scotland and assumed the full duties of the Scottish throne at the ripe age of 18. A devout Catholic, Mary was also considered the rightful heir to the English throne by many English Catholics. This made her a threat to Elizabeth, planting the seed of discord between the two. Mary’s enduring precarious reputation as a rather reckless queen driven by passion, with a lack of political understanding, was conjured up by her enemies to justify her demise, and was finally debunked by Dr. Guy. As Saoirse Ronan told The New York Times, this is a chance to show Mary in a new light, as a wonderfully complex figure, “filled with doubts and flaws, strengths and virtues." 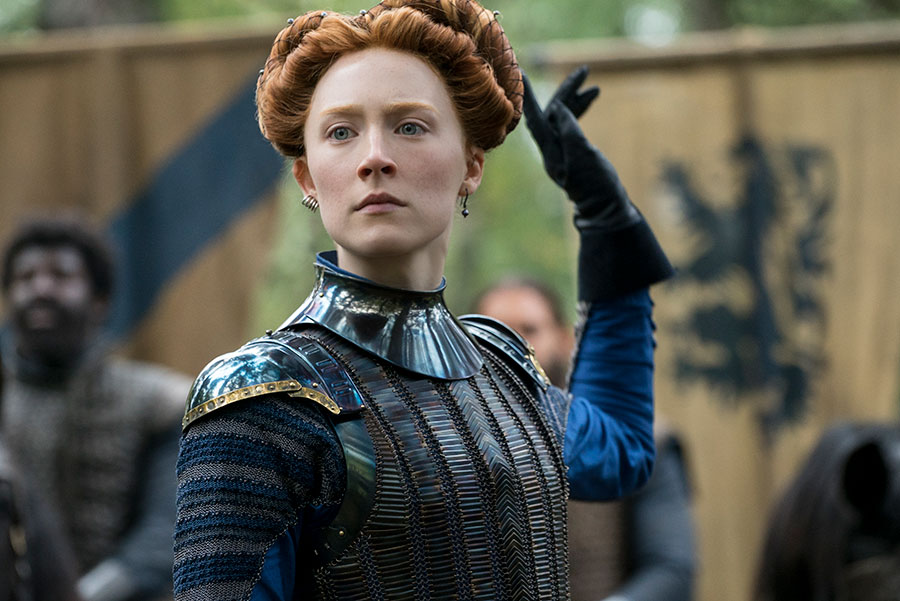 Mary’s half-brother, James Stewart (James McArdle) was the illegitimate son of James V and an early convert to Protestantism. Despite their conflicting religious and, at times, political views, James became Mary’s chief-advisor upon her return to Scotland. Their ambivalent relationship is put to the test through Moray’s rebellions, before reaching the tipping point and eventuating in Mary’s exile and imprisonment.

John Knox (played by David Tennant) was a Protestant cleric who led the Reformation in Scotland with fervent oratory. His dynamic with Mary was antagonist from the start, so it comes to no surprise that he became her toughest critic and relentless adversary. As historian Retha Warnicke explained to Slate Magazine, “claiming it was monstrous for a realm to have a woman as its head, Knox validated rebellion against the rule of ungodly governors.”

The notable English nobleman Lord Bothwell (Martin Compston) was selected by Mary to be one of her principal advisers. Their relationship and trust grew stronger over the years, only to shatter when Bothwell revealed his duplicitous nature, ultimately leading to a forced marriage and sparking their mutual downfall. 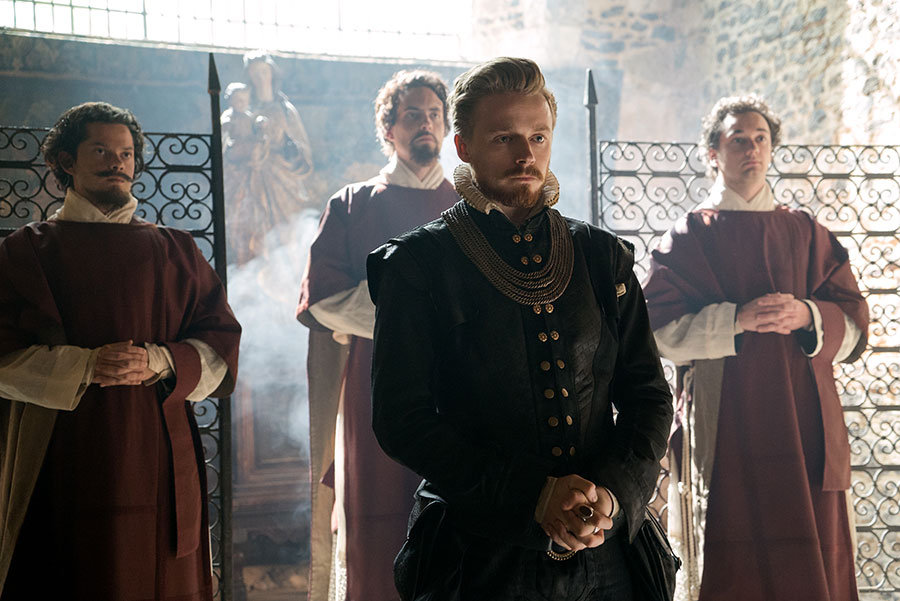 Henry Darnley, alongside his father Earl of Lennox (played by Brendan Coyle), was part of the House of Stuart. He was a first cousin to Mary and became her second husband despite strong protestations amongst the Scottish nobility. Reputedly charming and handsome, he proved to be, much to Mary’s chagrin, a far cry from an ideal match. As Jack Lowden’s explained to Gentleman’s Journal, Darnley was “always seeking to be the centre of attention and [was] riddled with vices: women, men, drink, power.”

Mary’s ladies-in-waiting, also known as the “Four Marys,” were the queen’s closest companions and lifelong childhood friends ever since her departure to France in 1548. Devoted to Mary Stuart, they had reportedly taken a vow of chastity to not marry until the queen herself remarried following the death of King Francis.

David Rizzio (played by Ismael Cruz Cordova), perhaps one of the most charismatic figures in court, was Mary’s Italian-born private secretary and confidant who, alongside the queen and the Four ‘Marys’, was commonly enjoying the court entertainments of the sixteenth century. As Josie Rourke and screenwriter Beau Willimon told The Wrap: “there is strong evidence to support that Rizzio was gay,” pointing to his close relationship with Lord Darnley. In his final chapter, Rizzio finds himself victim of (quite literal) backstabbing, the first blood-stained domino to initiate a cascade of tragic events. 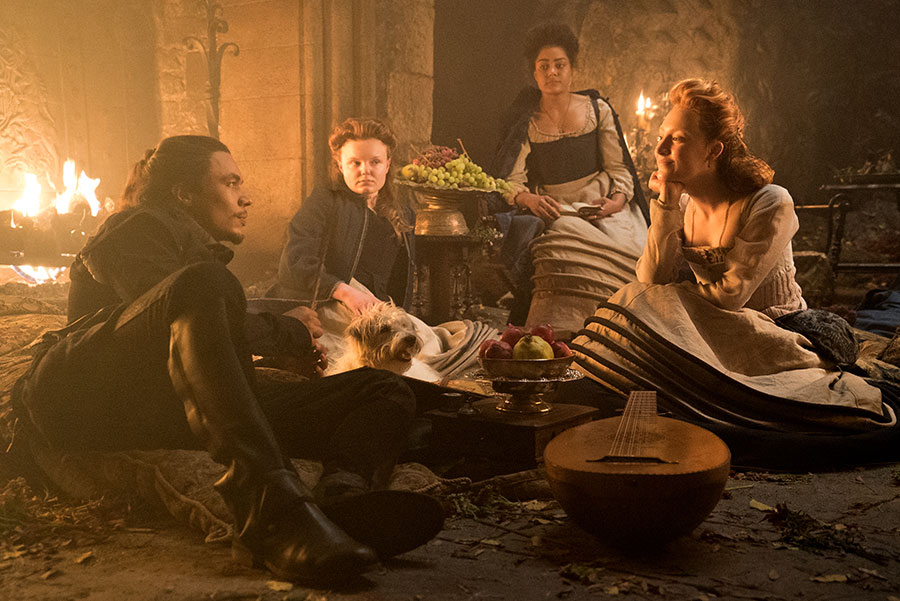 Elizabeth I, who has previously been portrayed in films such as Elizabeth: The Golden Age and Elizabeth I, was the last Tudor monarch to reign over England and Ireland for 45 years. Elizabeth endured numerous traumatic experiences in her early life, including her mother’s execution ordered by her father King Henry VIII, the loss of her princess title, molestation, and imprisonment. Upon ascending to the English throne, she was well versed in matters of scheming and quick to identify potential threats posed by the men surrounding her. In Dr. Guy’s opinion, as documented by Vanity Fair, “she had decided that she would never marry, because she had foreseen what would happen—and what could well happen is exactly what happened to Mary.” And indeed she neither married nor named a successor. Instead she devoted her whole self to England. Margot Robbie’s striking physical transformation throughout the film mirrors Elizabeth’s inward-facing journey from fresh-faced youth, to raw vulnerability, to ever-growing power. 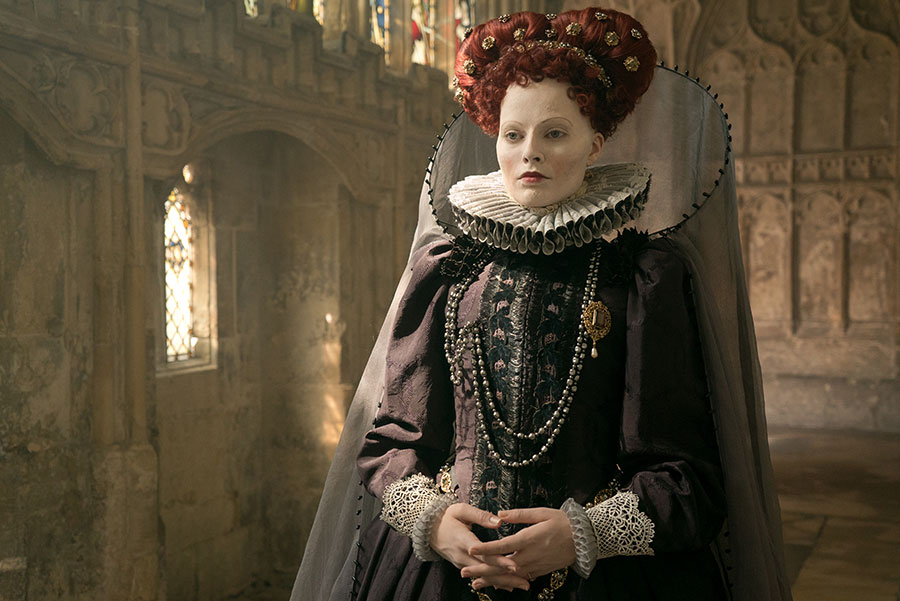 Margot Robbie as Elizabeth I.

William Cecil, the First Baron Burghley (Guy Pearce) was Elizabeth’s first advisor for most of her reign. Stern, shrewd, and always erring on the side of caution, he famously orchestrated a network of spies to protect Elizabeth’s throne. He was also instrumental in providing evidence of treason against Mary, prompting Elizabeth to sign her death warrant.

Robert Dudley, allegiant counsellor and a favorite of Elizabeth, shared an inextricable bond with the queen from a very young age. Contrary to the other players in court, Robert is the only male figure whose loyalty remains untampered by selfish agendas. As Joe Alwyn explained to Vogue, “he’s led by loyalty and true romantic love.”

Bess of Hardwick, an important fixture in Elizabethan English society, was the confidante and friend of Elizabeth. Described as a “survivor” (Irish Examiner) by Gemma Chan, Bess rose to a position of great wealth and power through a series of calculated moves. She was eventually entrusted as the keeper of the captive Mary Stuart. 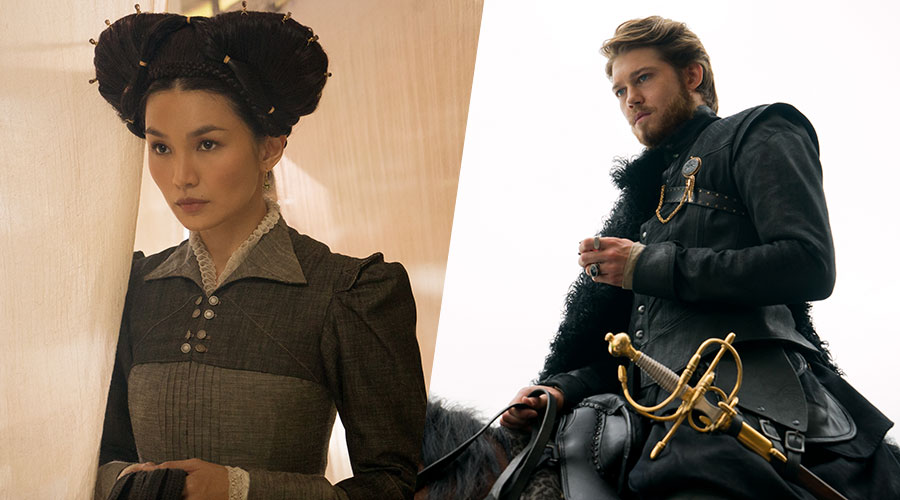 Thomas Randolph (Adrian Lester) was the English ambassador to the Scottish Court. During his time in Scotland, he couriered messages between Mary and Elizabeth as well as moderated failed negotiations with Mary for an English marriage, meant to ensure peace and her succession to the English throne. After Mary accused him of delivering false promises and assisting Moray in his rebellions, their relationship deteriorated sharply.