After 13 Years, Eternal Sunshine of the Spotless Mind Still Blows Our Minds

Why we can never forget Michel Gondry’s sci-fi masterpiece

Michel Gondry’s Eternal Sunshine of the Spotless Mind hit theaters on March 19, 2004, as a triumph of emotion and imagination. Entertainment Weekly’s Owen Gleiberman exclaimed that it “may be the first movie I’ve seen that bends your brain and breaks your heart at the same time.”

Written by Charlie Kaufman — who along with Gondry and Pierre Bismuth, won an Academy Award for Best Writing, Original Screenplay  –– the film follows the labyrinthine path of Joel Barish (Jim Carrey), a lovelorn soul grappling with the complexity of love. When he discovers that his ex-girlfriend, Clementine (Kate Winslet), has erased him from her memories with the help of Dr. Howard Mierzwiak (Tom Wilkinson) of Lacuna Inc., he decides to expunge her as well. But just as Lacuna’s team (played by Mark Ruffalo, Elijah Wood, and Kirsten Dunst) goes to work scrubbing his memory, Joel has a change of heart, escaping deep into his own subconscious to try to rescue his memories of Clementine.

In the 13 years since it was released, Eternal Sunshine of the Spotless Mind has grown even more rich and rewarding. The science it took as fiction has started to come true. Its insights into desire and memory have inspired lovers and philosophers alike. And its position as one of the great films of the 21st century has grown more certain.

In 2009, the A. V. Club put it at the top of their list of the best films of the aughts, noting, “It’s the rare film that shows us who we are now and who we’re likely, for better or worse, forever to be.” Writers Guild of America ranked Charlie Kaufman’s script 24th in their list of the “Greatest Screenplays” of all time, just above The Wizard of Oz. From Paste Magazine to the BBC to Time Out NY, film pundits have placed it among the top ten films of the first decade of the 21st century.

As Focus Features prepares to celebrate its own 15th Anniversary, we find ourselves revisiting some of the titles that define us as a studio and continue to move us. Eternal Sunshine of the Spotless Mind, which became a classic by rewriting all the rules, is one worthy of celebration this and every year. 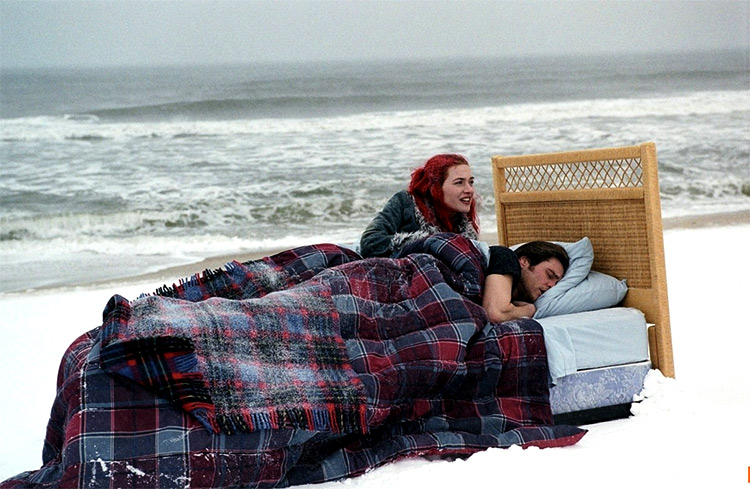 To those in the know, the film’s title makes clear both its literary pedigree and complex take on love. The phrase, “Eternal Sunshine of the Spotless Mind,” comes from Alexander Pope’s 1717 poem “Eloisa to Abelard,” the sad lament of a women, now a nun, remembering her impossible love for Abelard many years before.

The film starts on February 14, as Joel takes off work to visit Montauk, cynically noting, “Valentine's Day is a holiday invented by greeting card companies to make people feel like crap.” Despite such sentiments, the film has come to be adored as a smart person’s rom-com. Consistently picked by sites from Bustle to Techhive as the perfect film to watch on Valentine’s Day, Eternal Sunshine was recently named by the Huffington Post as “truly the love story of our time.”

“While most movies reduce love to a greeting card sentiment,” notes The New York Times’ critic A. O. Scott, “Eternal Sunshine of the Spotless Mind treats it as a subject for extended philosophical inquiry.” The film itself has borne the scrutiny of such deep examination, from a Nietzschean interpretation to a full casebook of essays as part of Routledge’s “Philosophers on Film” series. Yet, despite its ability to incite the most fascinating inquiries into the nature of love, identity, and memory, the story is deeply rooted in real life and emotion, as the director himself discovered during the making of the film.

By a cruel twist of fate, Gondry found himself acting out a scene from the film in his own life. During production, there was a section where Joel boxes up Clementine’s items after the break up that Gondry feared might feel “a bit like a ‘film moment’.” While editing the film, however, his hesitation completely disappeared when he found himself doing exactly the same thing after his girlfriend broke up with him. That scene “was not a ‘film moment’ anymore,” Gondry recounted. “Now, I can not watch Eternal Sunshine.” 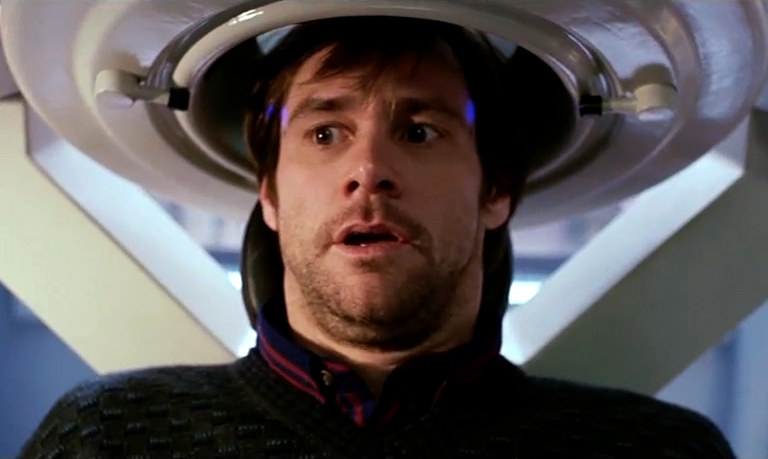 Not so fictional sci-fi

Part sci-fi brain teaser, part hip rom-com, Eternal Sunshine of the Spotless Mind’s narrative creates a sort of Mobius strip connecting our desire to understand the limitations of our world to our need to feel our heart’s emotions. As Slate’s David Edelstein explains, “Like the greatest science fiction writers, Kaufman is using a bizarre futuristic scenario to tell us something about the here and now: about the loss of our most vivid loves to the impermanence of memory; and about the life we lose when, to go on living, we force ourselves to forget.”

While its fantastic premise provides a poignant metaphor about love and loss, it has become in the last 13 years more science than fiction. In articles from Live Science’s “Spotless Mind? Erasing Memories Not Just Science” to Salon’s “How science is making Eternal Sunshine a reality,” writers repeatedly find similarities between the film’s brave new world and our own. Explaining a study published in the science journal Nature in 2014, the chief author, Susumu Tonegawa, told MIT, “In the future, one may be able to develop methods that help people to remember positive memories more strongly than negative ones.”

In many ways, Eternal Sunshine not only fulfills Tonegawa’s prediction, but turns it inside out, revealing how we already engage in such behavior. In 2015, Screencrush put Eternal Sunshine at the very top of their list of the Best Sci-Fi Movies of the Past 25 Years. “Science fiction has long explored what it means to be human, but Eternal Sunshine zeros in on that idea, asking what it means to be a human in love, in pain, and in confusion,” Screencrush explains. Unlike much science fiction that conjures up futuristic and faraway worlds to illustrate what is alien, Eternal Sunshine uses science to explore what is familiar and unavoidable. “Kaufman isn’t making commentary on trying to use technology to fix our problems, he’s simply pointing out that we already try to do this in real life and it almost never works,” notes Ryan Britt on Tor.com.

Bucking the trend of using CGI to create cinematic illusions, Gondry turned to a more DIY approach to movie magic. “Charlie had a very poetic way of putting this decaying memory into words, and I had to find something that would affect me the same way,” Gondry told the A. V. Club. “We decided early on that each time you see an effect in this movie, it has to give you a visceral response. You have to feel it.”

In American Cinematography, director of photography Ellen Kuras describes how they went “back to early cinema, where magicians were using live-action practical effects in order to change time and space…In one of the scenes, he wanted me to shake the camera so we could see it was a handheld effect in camera, as opposed to a locked-off superimposition effect or double exposure.”

With a slanted floor and skewed rectangular surface, an adult Carrey could be made to appear like a little child hiding beneath a table. In another scene, Carrey and Winslet swim freely in a sink thanks to a surreally sized kitchen. Sometimes the most incredible effects were created by the simplest of actions. Film Experience notes how “for the memorable shot of Clementine sliding backward into darkness across the floor of Grand Central Station, crew members simply pulled Kate Winslet with some wires.” 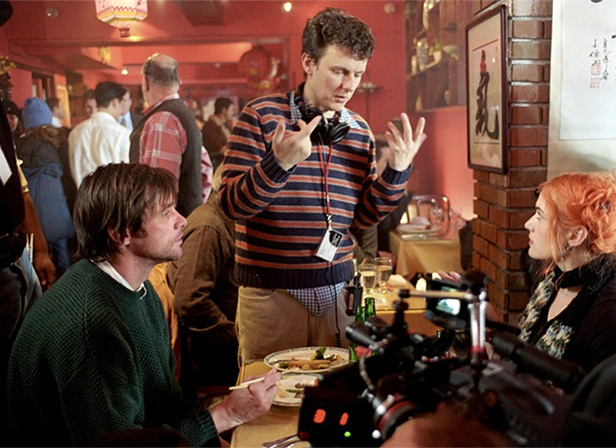 Its actors shine playing against type

One of the biggest surprises in a film with endless astonishment comes from the performances of the two leads. Both are, of course, remarkable actors, but their characters show off sides of them previously unseen. “These two actors engage in something of a role reversal,” notes the Austin Chronicle. “Carrey taking the low-key, reactive role and Winslet playing the wild and kinetic character.”

For Carrey, the brooding, romantic Joel Barish was a far cry from the wild and crazy guys he’d played in films like Ace Ventura and Dumb and Dumber. To get him in character, Gondry presented him a slightly altered version of the film, issuing instructions on set that often contradicted what he was telling the other cast members. When Carrey would “see Mark Ruffalo and Kirsten Dunst be crazy and improvising and going off-script,” remembers Gondry to the Daily Beast. “He said, ‘Why are they improvising? You told me the opposite!’ And I had to explain to him that it was different for his character. Sometimes, I had to talk to Kate Winslet in a different room to tell her, ‘Go as big as you want! This is a comedy!’ And to Jim, I’d say, ‘This is a drama, not a comedy’.”

For people who knew Kate Winslet only as the demur beauty of such period pieces as Sense & Sensibility and Titanic, her Clementine was a bit of shock. Spontaneous and funny, with a hairstyle that changed from blue to orange to red, Winslet was a revelation. Reading the script, Winslet told herself, “there’s no way I’m not going to do this, because I knew that it would be a totally new experience and very challenging.” Her gamble more than paid off when she was nominated for an Academy Award for Best Actress for her exuberant performance.

Watch Eternal Sunshine of the Spotless Mind on iTunes.