A Q&A with the actress about Jon Stewart's new comedy

At the heart of Jon Stewart’s comedy Irresistible—playing in theaters and on demand June 26—is the cut-throat rivalry of two opposing political consultants, Gary Zimmer (Steve Carell) and Faith Brewster (Rose Byrne). After an impassioned speech by retired Marine colonel Jack Hastings (Chris Cooper) goes viral, Zimmer heads to the small town of Deerlaken, Wisconsin to convince the ex-military man-turned-farmer to run for mayor and win back Middle America for the Democratic Party. But as soon as Zimmer launches his political campaign, his arch nemesis Faith Brewster arrives in town to support the re-election of the town’s Republican mayor. Before long, each consultant is gleefully dreaming up new and even more expensive ways to outwit and undermine the other candidate’s campaign.

Celebrated both for her psychological thrillers (like Damages) and her burst-out-laughing comedies (like Bridesmaids and Neighbors), Byrne was the perfect candidate to embody Faith’s comic chicanery. “Rose came in and right off the bat had the character down, had the rhythm down,” Stewart remembers. We talked with Byrne about working with Stewart, finding the character’s edge, and why making this comedy was such a sweet experience.

What do you think motivates your character Faith Brewster?

As a political strategist for the Republican Party, she is incredibly driven, super smart, and very ambitious. In short, she's a real political animal. They say you don't go into this business if you can't stand seeing blood on your hands. Faith not only likes having blood on her hands, she seeks it out.

What was it like working with Jon Stewart who is such a seminal figure in American comedy?

I was a fan of The Daily Show—a huge fan. Working with him was everything I wanted and more. What surprised me most was how disarmingly down-to-earth he is. The man rescues abused animals in his free time. He is a genuinely compassionate person, who just also happens to be really smart, funny, and an important figure in terms of the political landscape. I am so happy he's back.

Were there real-life figures on whom you crafted the character of Faith?

I revisited The War Room, that great D.A. Pennebaker documentary from the ‘90s. That film and the way it portrays the relationship between James Carville and Mary Matalin was something that I think Jon was quite inspired by in creating the bond between Gary and Faith.

Were there films or TV shows that inspired you?

I have always been fascinated by TV news as a dramatic backdrop, something that has only gotten more prevalent in recent years. As a viewer, I always try to watch both sides. As for films, Broadcast News is one of my favorite movies. I really enjoyed the show The Newsroom. To be part of that canon of shows that look at the system and try to dismantle it with humor the way Jon has, that was really intriguing to me.

There is something delicious about Faith’s conniving and underhandedness. How fun was it to play her?

It was a delight. Jon wanted me to go further, turning her interactions with Gary into a kind of bloodsport. She loves that level of conflict. In talking about her, Jon was really eloquent in explaining how much these people thrive on politics as a bloodsport. 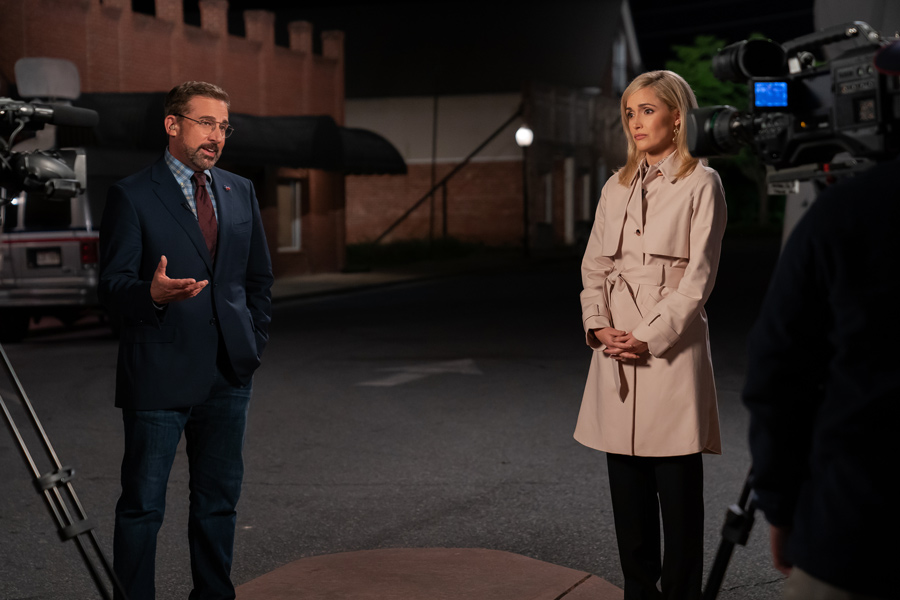 Gary (Steve Carrell) and Faith (Rose Byrne) fight it out in Irresistible.

The rivalry between Gary and Faith is both fierce and affectionate. Did you create a backstory about them and their past?

Yes. Jon went through all these questions in detail—Where did they meet? How many political contests have they fought? Do they have this on and off relationship? They have this powerful connection that is based both on their differences and the respect they have for each other. I think that her dismissiveness towards Gary is actually something that Gary finds attractive. It is such a specific world that they are in, a job so few people can understand. In working out our characters, we dug into their history together, trying to get the smallest details right—like what restaurant in Washington would they visit?

In the end, there is something bracingly human and sweet about this story and the people in it.

In some ways, shooting the film followed a similar arc to the storyline in the movie. We were this Hollywood crew—or at least people from LA and New York—coming to a very small rural town in Georgia and making a movie. This seemed just like the political operatives coming into a small rural town in Wisconsin to run an election. At the same time, the experience was very moving. I loved talking to all the people there, and they seem to love meeting the crew. It was an interesting parallel experience that Jon wanted to tap into for the feel of the movie. There is a sweetness—and a bitter sweetness—to the movie.

What would you like audiences to feel after seeing the film?

I would like them to vote. That is all I want.