Thomas Bezucha’s Let Him Go follows retired sheriff George Blackledge (Kevin Costner) and his wife Margaret (Diane Lane) from Montana to North Dakota in their quest to bring back their young grandson. Far from home, the couple face off with the Weboys, a corrupt Western clan whose matriarch (Lesley Manville) refuses to give up the young boy her son acquired through marriage. Set against a majestic Western landscape, this familial showdown evokes the classic struggles that have made the Western an enduring genre. Shot in Alberta, Canada, the film hired local production designer Trevor Smith to recreate the American west of the 1960s, from its small, dusty towns to its big sky locations. Having already worked on such neo-Westerns as Fargo, Wynonna Earp, and Robin Wright’s upcoming Land, Smith applied his talent to creating Let Him Go's unique look. (You can recreate your own Western by signing up for the Let Him Go Getaway Sweepstakes.)

We spoke with Smith about recreating America's frontier towns, designing the Blackledge's road trip, and building from scratch the iconic Weboy mansion. 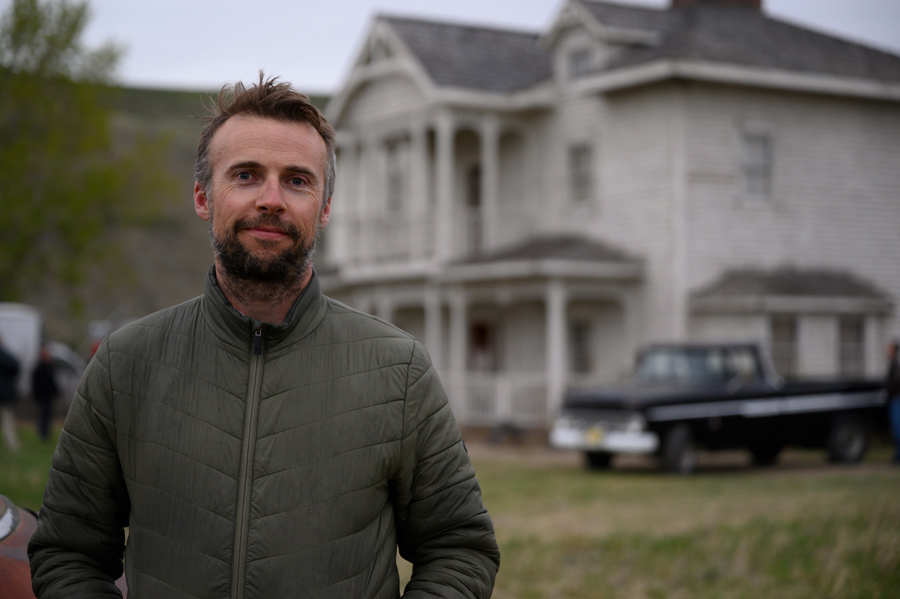 Production designer Trevor Smith on the set of Let Him Go.

In early 2019, the production airlifted itself into Alberta. I was lucky because the producers wanted to buy local. Since the film was so topographic in nature, everyone saw the efficiency of having an Albertan. I know the countryside like the back of my hand.

You’ve worked on quite a few Westerns. Are you drawn to the genre?

Yes. I am a big cinephile and used to own a video store. The Western as a genre is of great interest to me. It is in my blood. Working and living in Alberta Canada, our bread and butter is the Western.

From the start, we needed to define the movement of the two main characters through color and texture. It is a road movie after all. As George and Margaret travel in a station wagon, their world changes both figuratively and literally. The story begins in this green, friendly sense of family and community. The Blackledge Ranch is surrounded by grass, and green trees and inside we used a green theme, like an olive wallpaper. As they leave home, the colors turn tan and yellow, which is a traditional Western palette. Lots of golds and browns as they drive out of the foothills of the Rockies and then more browns and dirty grasses as they hit the flats. When they reach the Weboys’ home, the palette becomes barren. We shot a lot of that in Drumheller in the Dorothy region of Alberta, an area that is characterized by the Hoodoo barren valleys, glacial channels, and ripped ridges. Not much grows there so it feels like a haunted place with the Weboys’ house placed like a birthday cake in the middle of this desert. 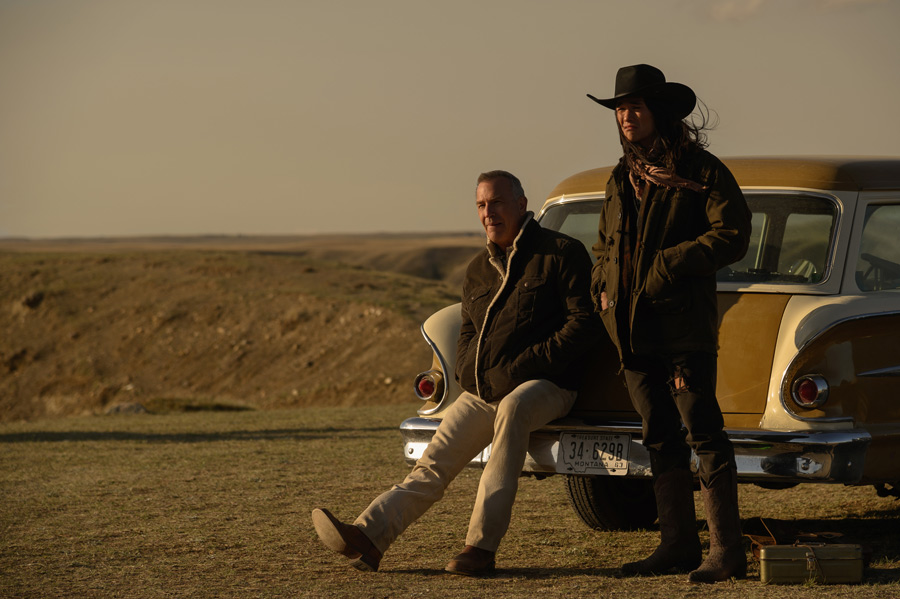 How did you use the landscape to define the characters and the story?

Visually and topologically, the film is a triptych. The Blackledges’ home is among trees with the Rockies in the background. It feels like the home of a functioning family. As they drive towards the Dakotas, everything goes flat. These small towns, like Bentrock—which we shot in Fort MacLeod—feel as if they have been plunked down by a river with nothing else there. In the third act, in the land of the Weboys, the landscape turns dramatic as there are these terrible coulees where people can just drop down into the riverbed. It is like a version of Hell.

What sort of research did you do to recreate the small towns in the west?

While we wanted the details right, we didn't want to create a period piece with a capital “P,” where a crane shot comes down to reveal a street filled with shiny vintage cars and people wearing 1961 clothes. We wanted to put the viewer in that world. To get it right, we looked at a lot of photographers, like [Stephen] Shore and [William] Eggleston, of course. And also there was a photographer out of Vancouver, Fred Herzog, who I really like. One of my biggest struggles was creating a sense of under-decoration. During this period, people just had less. In the stores, there wasn't a lot on display, and at home, people really only had one or two pieces of art on the walls. There was a lot of austerity and negative space. I had to fight the impulse to fill every inch with stuff. For people then, every object was special and they would use things until the wheels fell off. To get a more realistic mix, we tried to have a lot of cars from the 30s and 40s, as well as contemporary models. We wanted to capture America in its mundane plainness. 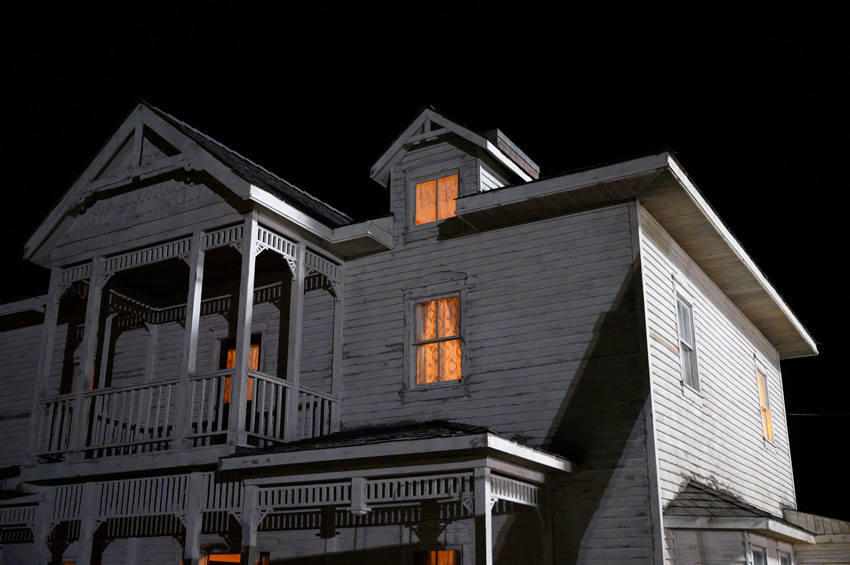 The Weboy mansion in Let Him Go.

How did you design and build the Weboy mansion?

It was definitely the biggest and first challenge from a production point of view. Much of the physical action on the page had to do with the house being two stories, so we had to work all that activity into the design. Because coordinating all that was so complicated, we needed as much time as we could to design and build it. It became clear to me that we had to build both stages in an interior studio with two integral floors and a facsimile on location that could handle all the exterior work. Getting the flavor of that house, as well as all the details the script required, was very complex.

There’s a legacy of iconic cinematic houses. Were there films that inspired your design?

I love those 60s and 70s Westerns like Hud and The Last Picture Show. We talked a lot about Giant. In fact, there are a couple of almost direct references to it. I thought of Days of Heaven, of course, with the house that Sam Shepard had built in the middle of the prairie. I always thought that house was a reference to Andrew Wyeth's painting Christina's World. These things reference each other whether you want them to or not. For the Weboys’ home, we wanted something with a Prairie Gothic quality to it. The house would reference that they were an early homesteading family, which is a point of pride for Blanche. Even as we did our best to make it realistic, there is something hyper-real about it, this big house in the middle of nowhere. There is no sense of a ranch—no fences or barn—just an outbuilding where the boys work on cars. 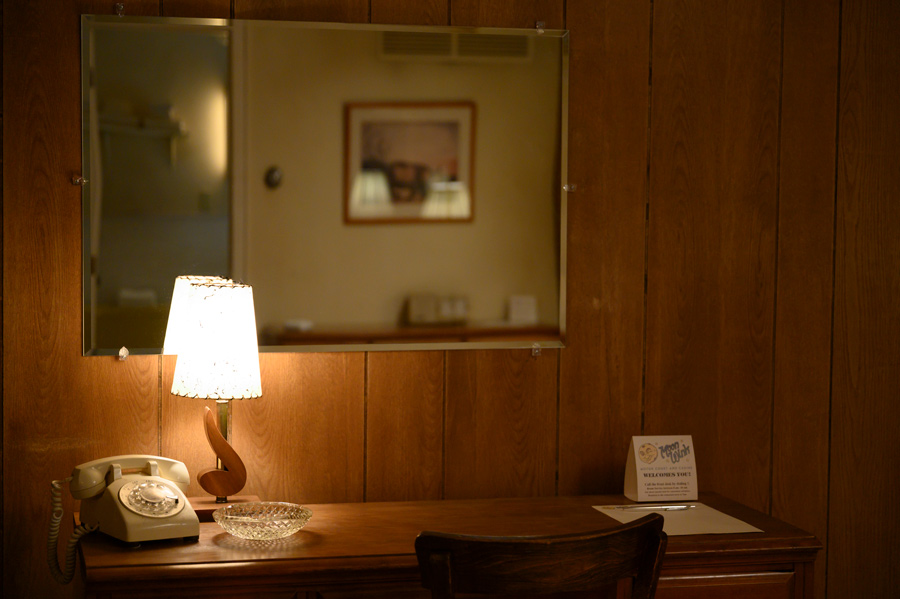 The motel interior in Let Him Go.

Were there design elements that turned out exactly as you wanted?

There were many. As a designer, I felt completely in step with both the filmmaker and cinematographer [Guy Godfree]. I think the motel where George and Margaret hold up is an example of things working out right. We built the interior in a studio to match an exterior location in Drumheller. For inspiration, we had this Todd Hido image of a motel stapled to the wall for what it should look like. That night when Guy brought up the lights on set, I thought, “Wow! This really is our idea realized." It was the same with seeing this stick-frame house go up in the middle of nowhere and become the Weboy mansion.