The acclaimed actor tells us why his new movie speaks to the world we live in now.

In Laure de Clermont-Tonnerre’s The Mustang—in select theaters March 15—Matthias Schoenaerts plays Roman Coleman, an inmate at the Northern Nevada Correctional Center serving an eleven-year sentence for domestic violence. Selected to participate in the prison’s wild horse training program, Coleman is assigned to break a wild mustang, discovering in the process just how much the horse actually changes him. After premiering at the 2019 Sundance Film Festival, The Mustang and its star have been receiving rave reviews. Collider triumphs “a Show-Stopping Performance” by Schoenaerts and Indiewire acknowledges that he “has never been better.” The Flemish actor started in films at age 13 in the Oscar®-nominated Daens. In 2003, at the age of 26, Schoenaerts was named one of the European Shooting Stars, a title he more than lived up to in a range of critically acclaimed films, from Paul Verhoeven's Black Book to Michaël R. Roskam’s Oscar®-nominated Bullhead to Jacques Audiard's Rust and Bone (for which he won a César Award for Most Promising Actor). Fluent in English since his youth, Schoenaerts has appeared in such notable English-language films as The Danish Girl and Far from the Madding Crowd.

We got the chance to talk with Schoenaerts at Sundance about what drew him to this part, picking his own horse to train, and why he feels this film is so relevant to our times.

How did you get connected to the film?

I came on board about two years before production started. I’d met Laure at Venice Film Festival. There were so many parts about the story that attracted me. Obviously it has a poetic dimension, but also a very brutal, violent dimension. It is also a very relevant story. It is a story that has a real importance in the world we live in today. People like Jay-Z and Meek Mill are offering $50 million to stimulate prison reform with their REFORM alliance. And Jane Fonda is supporting work towards that effort. In Laure’s story, there is a very poetic aspect to this rehabilitation program. I was fascinated by the humanization of a person by an animal. The fact that Laure was so passionate about this project that she had been working on it for five years made me want to work on it.

How would you describe your character and what interested you in playing him?

This guy is in a God-forsaken place. It doesn't get more desperate or lonely than where he is. I find it fascinating to portray the strength of a human being through his ability to live in, even overcome, that reality. There are so many parts in the arc of that character that I relate to and identify with. Basically it's a character coming back to life. For ten years, this guy has been completely disconnected. He doesn't want to have anything to do with people. Then slowly but surely he rediscovers himself and comes back to life by interacting with this animal.

It seems that anger is the only way he can communicate with others.

He doesn’t have access to his own feelings anymore. He has blocked them out and become a sociopath in a way. His inability to understand things comes out in a frustrating way. It is that unbalanced emotional unawareness and lack of reflection that takes the shape of violence.

How much research did you do for the role?

We visited four maximum-security prisons where we spent nearly an entire day with the inmates. Some were lifers and some had a shot at parole. Talking with them for six or seven hours gave me tremendous insight into the dynamic of being there. I also think I absorbed a lot just by being there, information you store and use later on set.

Some of the cast included actual people who’d been through the wild horse prison program. What did you learn working with them?

The basic truth I learned is that people need tenderness. These guys may have been the craziest badasses in the place, yet what brought them back to life is the sincerity and the genuine affection of the animal they worked with. This program really does miracles. Some of the hardest criminals go into the program and there they open up. They become sensitive beings. I don't want to generalize because it's a very complex process. It's not like after they connect with the horse, a miracle happens and suddenly their life is a bed of roses.

Had you had a lot of experience with horses?

I did a movie called Far from the Madding Crowd where I learned to ride horses. But this was really a new experience because it involves training and working with wild horses.

Did you bond with a particular horse like your character does?

Yes. I chose my horse—the buckskin horse I ride in the film. I fell in love with that horse well before we started shooting. Of course you'd have to be a pretty insensitive being not to develop a relationship with a horse on an emotional level. 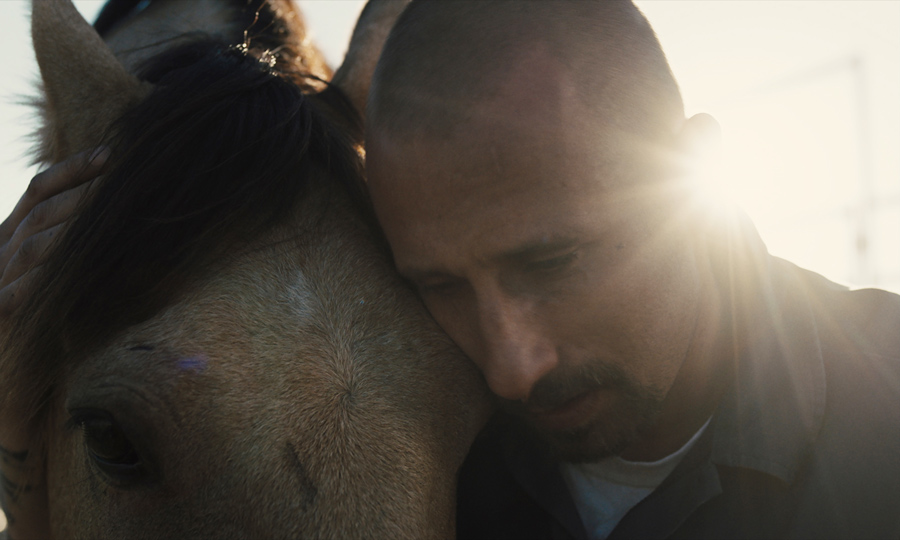 Matthias Schoenaerts bonds with his horse in The Mustang

It is the paradox of this film: men learn how to be kind to one another through animals.

That’s what I love about this movie—the humanization of people through animals. Without them, we we just learn to hurt each other.

Can you talk about the location, which is an old Nevada State prison surrounded by this wide-open Western landscape?

It’s a stunning place. It’s an old facility so it felt like there were hundreds of ghosts wandering through it. It was still in use until five years ago then they built a new facility about a half-mile away. I don't know to what extent the place influenced my performance, but everything does. It definitely gives a special texture to the movie.

This is a deeply emotional film. How did that affect you?

It made me want to be kinder. When I spoke to inmates about their past, what brought them to prison, and what they want for the future, it seemed like so many come from disrupted families. There was drug addiction, abuse, alcoholism, violence, and all kinds of terrible stuff. It’s not shockingly surprising, but to see it so explicitly confirmed made me aware that everything we say or do to other people has a ripple effect that extends far into the future.