Michael Engler’s film Downton Abbey—now playing in theaters—takes fans back to the elegant Yorkshire estate made famous by the beloved TV series. Here, bejeweled women in silky dress dance with men in white ties while crisply suited servants watch in the shadows. In the film, a once-in-a-lifetime visit from the King and Queen of England pushes both the upstairs and downstairs to up their fashion game. Costume designer Anna Robbins, who joined the TV series in season five, was tasked with crafting a new level of elegance and sophistication in the already opulent world of Downton Abbey. With a remarkable attention-to-detail and finish, Robbins' costumes show off on the big screen Downton's rich and resplendent fashion style.  For Vulture, her costumes “pop off the screen with more texture and beading that sparkles a bit more brightly.”

We spoke with Robbins about her own creative process, the way the show’s various fashion trends chronicle modern history, and how Downton style inspires viewers.

How was creating costumes for the film different than working on the TV series?

There were a few differences. Each season of the series had nine episodes, including a Christmas special. For TV, I had more costumes to tell the story with and to explore different looks for our characters. With the film, it was about editing down and finding the key looks. On the big screen, where a shoulder is measured in terms of feet rather than inches, the quality control has to be pretty much perfect. My goal was to raise the bar higher than we had done on the series—which had already been set pretty high.

Having worked on the TV series for two seasons, what lessons were you able to apply to the costuming of the film?

I did the costumes for the fifth and sixth season of the TV series. With such a huge cast needing so many outfit changes (between daywear and eveningwear, standard and state livery), costuming was a logistical challenge. Having done the show, however, proved a real asset in working on the film. I got to know the characters so well that shopping for them became second nature. I knew how to spot a Lady Edith dress from across a shop instantly, thus freeing up time to focus on the day players and research. 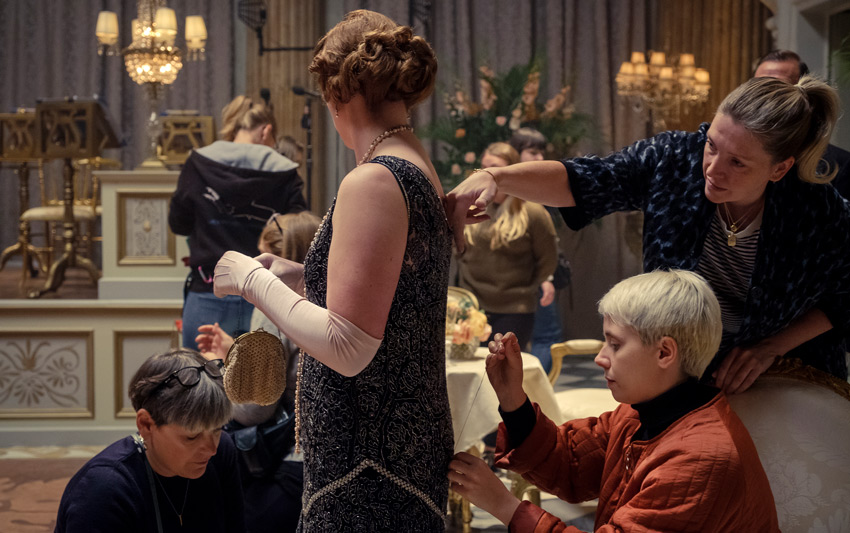 In dressing the film, what percentage of the costumes were acquired versus designed?

There a lot of factors. Our menswear was more often tailored from scratch, because much of the suiting doesn't exist in the same way anymore. And if it does, it is not usually the right size and shape for our actors. With womenswear, it was possibly a 50-50 split. I definitely acquired more original pieces for eveningwear. It may have been just harder for me to find exactly what I was after in daywear. Also each character had different needs. I found it easier to pick up original daywear for Edith (Laura Carmichael), while my ideas for Lady Mary (Michelle Dockery) made it hard to find outfits for her. Laura Carmichael wears the colors of the twenties—lots of beautiful peach and turquoise—so wonderfully. For Mary, I wanted something much more striking, so many of the costumes had to be made from scratch. There were also many hybrid outfits. There were some dresses that show up pretty much the way I found them. Others started off as one thing, and then I would end up just using the fabric and turn it into something completely different.

One of the costumes for Queen Mary has a connection to the actual royal?

My journey with Queen Mary was really incredible. Costuming a real-life character, especially a royal, is challenging because there is a lot of historical images for people to compare it with. I worked very closely with John Bright from Cosprop for the outfit worn by Queen Mary (Geraldine James). He had in his collection some clothing that had actually belonged to Queen Mary. We were able to analyze its construction, as well as consider the level of embellishment and the fabrics used. Bright also had some fabric, some silver lame silk that had belonged to her, which we used to construct part of her ball gown.

In addition to costumes, you used a wide range of accessories and jewelry.

Getting them was a combination of sourcing authentic twenties jewelry and creating new pieces. For the new pieces, I worked with jeweler Sophie Millard. In addition to sourcing period pieces, we were loaned some very expensive tiaras by Bentley & Skinner. These were not pieces our budget could have been stretched to buy, so it was a real privilege to be loaned them. They were the icing on the cake for many costumes.

When you are designing jewelry for film, can one tell the difference between costume and actual diamonds?

If I have done my job well, it should be hard to spot the real thing among our wonderful fakes. For the real, you almost have to look behind the jewelry to see the diamond setting that allows the light to refract through the jewel. For the replicas, we used Swarovski crystals, which were backed differently. For all intents and purposes, they looked just as impressive. For the ball scene, we recreated the famed Cambridge emeralds. The original tiara has something like 1,900 diamonds in it, ranging from ones that are a few carats to tiny specks. Our tiara has 1,200 pieces, which is pretty impressive. 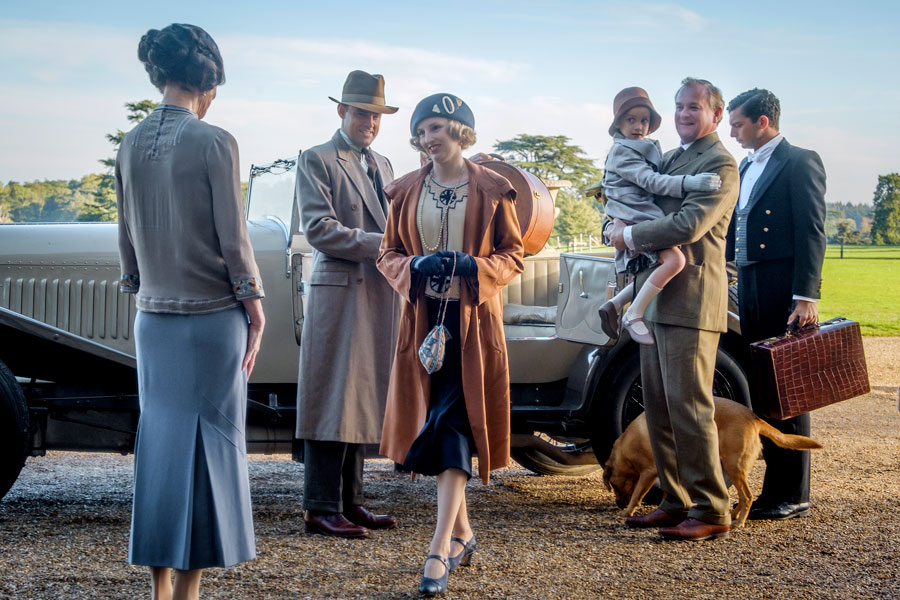 The film Downton Abbey reflects the changing fashion of the twenties

From 1912, when the series began, to 1927, when the film occurs, the world has changed drastically. How do the costumes chronicle those social and political shifts?

The most notable shift in womenswear was how the silhouette changed from being Edwardian and corseted to a very different shape. Women discarding the corset became a significant moment in modern history. Emancipated women went to work, so the shape of womenswear in the twenties changed from being tight-waisted to a straight up-and-down, looser silhouette. Also you go from these wide-brimmed hats that were perched on top of the head to the cloche hats that come right down around the ears to accentuate the fact that women were chopping their hair off. There are hundreds of microtrends to follow in fashion during this time. For example, with jazz music being played in clubs, dancing changed and women wanted to have dresses that had more movement. Suddenly you see outfits with fringing to sway with the body and beading to catch the light.

How was the personality of a character defined by his/her costume. What do Lady Edith's outfits say about her?

Lady Edith is an interesting example of how costume can help tell a story. In her journey of emotional highs and lows, the costumes have followed suit. When I came on in season five, her costumes were quite autumnal and pared back. She wasn’t putting herself forward as the center of attention. In the next year, we witness her personality blossoming as well as her finding happiness as a career woman working in London. Her sense of style and confidence grows. To show off that growth, I had great fun developing her working woman’s wardrobe as well as the lighter clothes with more spring-like colors she wore while at home at Downton Abbey. In the film, Edith is no longer working, but her confident look continues. 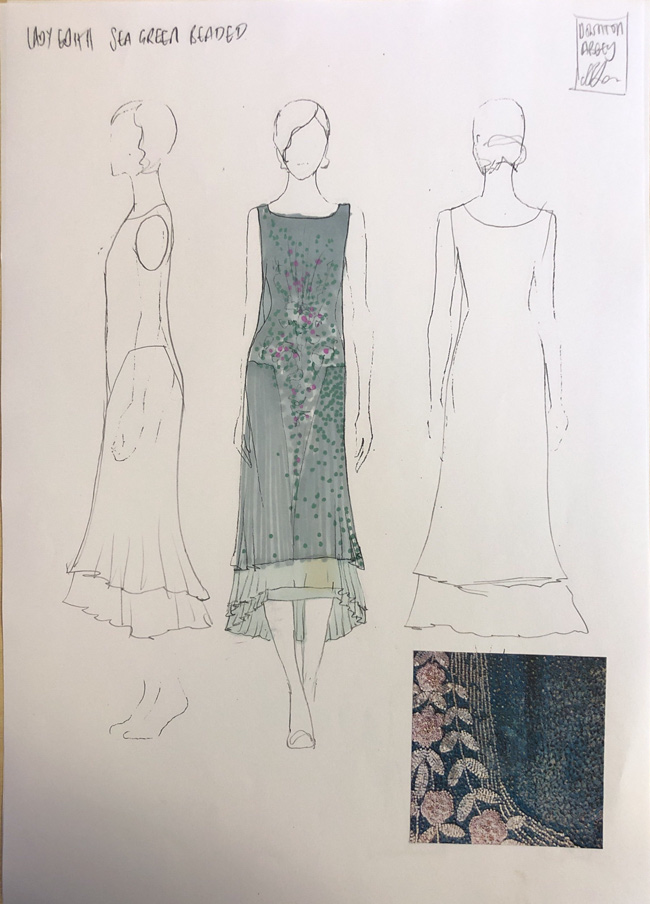 How does Lady Mary’s look contrast with Edith’s?

I designed them in conjunction because they are often seen together. I would often posit a dichotomy between them—positive/negative, strong/soft, light/dark. I wanted a contrast that would highlight their differences but also show off the ways they complement each other. If I used a red tone on Mary, it would be rich and dark, possibly a maroon. On Edith, I would soften it down, making it rosier or peachier. Mary’s lines are very elegant and striking, without being too prissy. With more solid color blocking in deep greens and such, there is a real strength and elegance to her wardrobe. In running the estate, Lady Mary is a working woman in very much a man's world. To highlight this, I developed a sort of three-piece suit for her. So even in scenes where she is not actually working, her clothes make clear that  she is running the estate.

As for the men, what can you say about Tom Branson’s outfits?

In the TV series, I tried make Tom Branson (Allen Leech) distinct from the rest of the family. To show off his Irish roots, I would often tailor his suits in some sort of Donegal tweed, which is where he is from. He would often wear softer shirts to mark off his distinction from the stiff shirts of the family. In the film, we got rid of that distinction. I essentially mirrored in his clothes the fabrics that Robert Crawley (Hugh Bonneville) had his suits tailored in. They are not exactly the same, but they are definitely of the same world. Branson could almost be Robert's son. It sends the message that he is now fully assimilated into the world of Downton Abbey.

For someone from the downstairs, how did you dress Thomas Barrow?

Through the series, Thomas [Barrow (Robert James-Collier)] has moved up the ranks. When we meet him in the film, he is the butler. As he ascended, his uniform changed to fit his position. In the film, we get to see him in civilian wear quite a bit. We were able to strip away the layers and show him in a more relaxed environment with a wool coat and hat, comfortable in his own skin for possibly the first time in his life. 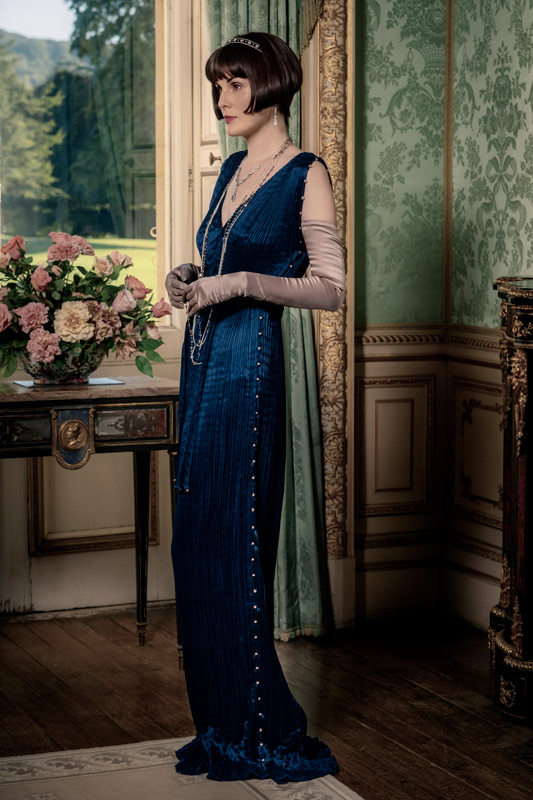 Lady Mary's gown for the ball

How did you go about dressing the ball scene?

For the ball, I wanted to create a beautiful scene with real harmony in terms of the palette and fabrics used. We had a beaded dress on Mary, a princess velvet dress on Edith, a chiffon and lame dress on Cora (Elizabeth McGovern). It was about showing the very best of what 1920s couture had to offer. At the same time, every color and style was chosen with the character in mind. The starting point was the relation between Violet (Maggie Smith) and Lady Mary. I wanted there to be a real contrast between the two of them as well as design elements that connected them. Both dresses had a V-shape on the bodice and on the back. When you see them enter and leave the room together, you see the connection between the two. Yet their dresses were also stamped with their distinct personalities. There is a clear contrast between the striking monochrome of Lady Mary’s gown and the beautiful layered and embellished detailing of Violet's more Edwardian sculptured costume.

Fans so love the characters and the world of Downton Abbey. What do you think makes this story so beloved?

First off, the characters are so well written. The world that we have created is so rich and believable—both tantalizingly close and yet so hard-to-reach. I think we have a fascination with this way of life that is just beyond our reach and our understanding. You layer that up with the writing, the casting, and the performances, and you have something quite remarkable. There are so many ingredients and layers in a show. When you get them all right and they all connect with the audience, you have something very special, something that is bigger than the sum of the parts.