A Q&A with composer John Lunn

Michael Engler’s Downton Abbey—in theaters this Friday—reunites fans with the characters they grew to love over the six years of the television series. Set in 1927, the film begins with the news that the King and Queen of England will honor the beloved Yorkshire estate with an official visit, a proposition that awakens both the upstairs and downstairs to prepare for that auspicious occasion. Underneath all the activity, from Mrs. Patmore (Lesley Nichol) bustling about the kitchen to Lady Mary (Michelle Dockery) organizing the social details, John Lunn’s elegant score provides a sense of harmony. As part of the show’s original creative team, the Emmy®-winning composer both sets the pace for the action and evokes the very heart and soul of the place with his instantly recognizable theme music. ITV News echoes many fans when it recalls how in watching the film, “the moment the luscious sound of John Lunn's theme music begins, I am lost in glorious, dreamy nostalgia.”

We spoke with Lunn about how he created that iconic theme, his musical influences, and how the filmmakers tasked him with introducing the film Downton Abbey with an extended musical sequence.

Is there a difference between writing music for the television show opposed to scoring the film?

It's not really that different. The movie is a direct continuation of the story from the TV series so there are similar themes in both. The big difference for me was that I had a little bit more time to write and experiment. And I had a bigger budget and string section.

How big was the orchestration for the film score?

For the TV series, depending on the episode, we had between thirty and forty strings, plus me playing piano. In the movie, we used about sixty strings. It wasn't like a normal symphony orchestra, but then I didn’t want it to suddenly sound like Star Wars. It still needed, not exactly a chamber quality, but a certain lightness to it. A lot of the music in Downton Abbey is about the relationships between characters. In the movie, those relationships are either still the same or developing in new ways. The score is a continuation of that—only bigger and grander

In addition to writing music for various relationships, are there individual themes?

There is certainly a theme for the house. In the series, Matthew (Dan Stevens) and Mary had three or four themes because they had quite a journey. The same with Anna (Joanne Froggatt) and Bates (Brendan Coyle). Thomas (Robert James-Collier) had a theme of his own, because he is a gay man living in a world that doesn't recognize him. 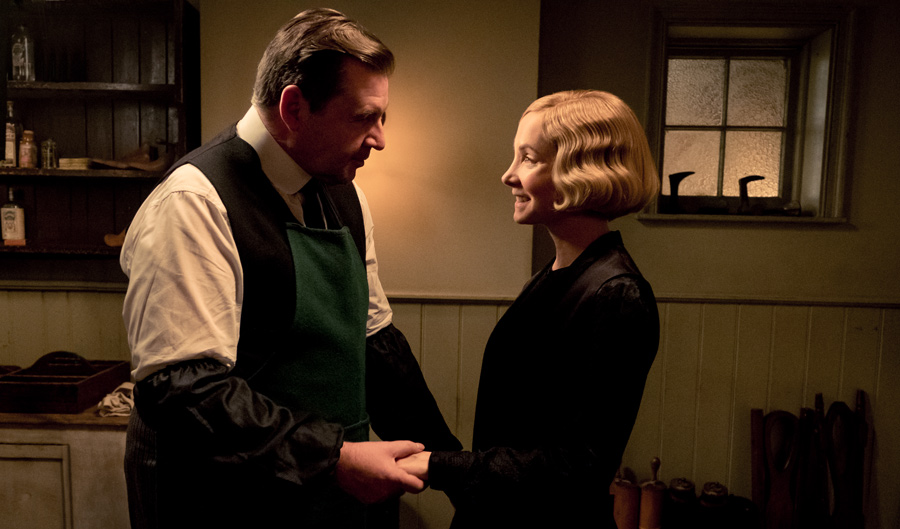 Can you talk about the decision to begin the film with an extended musical piece?

From the very beginning, the director Michael Engler and I talked about having a musical sequence that is almost five minutes long to start the film. We used it to reintroduce the audience to the world of Downton, to bring the audience back into its high drama, romanticism, and heartache. Most of the music in the sequence comes out of themes used in the TV series. We also wanted to refrain from introducing the title sequence until the very end. At one point, you think that the intro is coming to an end and you still haven't heard the title theme. That’s when we introduce it.

The title theme is now one of those iconic pieces of music. Can you tell us what inspired it?

In the very first episode, there was no title sequence. We just start with a train moving across the English countryside. For the score, I wanted to emulate the energy of that train. Then we see a lonely man, who turns out to be Bates, staring out the window, looking as if he’s had a hard life. I picked out this high piano tune for him. Next, we see telegraph wires, which are carrying a message that the heir to Downton Abbey has died on the Titanic. For this, I created a more emotional string tune. Of course, the audience doesn't know any of this. I was just trying to infuse the images with an emotional significance. We then follow the telegraph wires ending with a longshot of Downton Abbey, which is actually Highclere Castle. Here the harmony becomes grander and more elegant. Everyone so loved the music from that first scene, that I did a thirty-second version for the end titles. But the filmmakers decided that they wanted it under the front title as well. If I'd been given the images for the title sequence as it is now—starting with the Earl of Grantham’s dog, then followed by a montage of servants setting up the house—I would have created very different music.

In composing the score, did you reference the music of the time in any way?

Not really. I listened to a lot of Elgar and Vaughn Williams. But I sort of discarded them. There were a few hunting scenes for which I composed music a bit more in the style of the period. But I never felt my job was to make people feel like they are in 1912 or 1927. My job is much more psychological. It's about thinking or feeling, not about placing you in a particular period.

Were there composers that influenced your score?

I suppose Philip Glass in some ways was an influence. His music is both classical and sort of timeless in a way. If you look at the harmony of the title treatment, it's closer to a Coldplay song than anything else.

In the TV series, much of the narrative springs from conflict, while the movie is more focused on resolution. Did those themes influence the score?

Yes, I did feel that in a way. That was one of the trickiest parts in writing the score. There are quite a few resolution scenes that are right after the other. I was desperate to find different ways to represent the emotion of that. Even though most of the resolutions are quite happy, and one is quite ecstatic, finding the right tone was difficult. Music is very good at charting the conflicts in a TV series, whereas finding different ways to resolve people’s stories is more complicated.

Fans love the story and its characters. What do you think makes this world so beloved?

I suppose everybody has someone in the series they can identify with. It is so well written and very well acted. There is an element of nostalgia in it too in the way that people view the time as a period when things were just clearer and simpler.