The Music Of The Heart: EMMA.’s Joyous Score

A Q&A with composer Isobel Waller-Bridge

In EMMA., Autumn de Wilde’s adaptation of Jane Austen’s masterpiece, the “handsome, clever, and rich” heroine (Anya Taylor-Joy) choreographs the loves and lives of her fellow Highbury citizens with unsparing certainty. Only her own heart and feelings, mostly towards Mr. Knightley (Johnny Flynn), remain a mystery. To score this giddy dance of emotion and ambition, de Wilde turned to composer Isobel Waller-Bridge. “Isobel has a sparkling wit, intelligence, and sense of humor to her work,” noted Wilde, who bonded instantly with the up-and-coming composer.

Bridging the traditions of orchestral music and electronic sound design, Waller-Bridge has created distinctive scores for both period dramas (like the BBC TV series Vanity Fair and the miniseries War & Peace) and more contemporary stories, such as the sci-fi series Black Mirror and the award-winning comedy Fleabag (which her sister Phoebe Waller-Bridge created and stars in). For EMMA., Waller-Bridge wove together music from the period (including pieces by Beethoven and Hayden) with an original score that accented the razor-sharp wit and deep-seated humanity of each of the characters. In calling EMMA., “the candy-coated Clueless remake we deserve,” Salon was quick to give credit to “Isobel Waller-Bridge’s vibrant score” for the film’s success.

We spoke with Waller-Bridge about her and de Wilde’s shared musical vision, what instruments became associated with which characters, and why the story of EMMA. continues to delight audiences.

When you first talked with Autumn de Wilde, what was the creative vision for the film’s score?

We spoke in depth about how she felt the music’s presence should feel exaggerated, as if the conductor was reacting to the action in real time, and that the music should never feel like background. Part of Autumn’s original vision was to include specific recordings of pieces from the period with which she has a personal relationship. Glenn Gould’s interpretation of the Beethoven Piano Concerto, and Haydn’s Farewell Symphony are personally significant to Autumn. These period pieces presented important information to me about how the score should be shaped and designed around them.

"Autumn had choreographed almost every scene as a dance, so there was already so much rhythm and musicality in the action."

How well did you know the novel before creating the score?

I’d read Emma when I was at school. I knew the characters and the twists and turns of the story, of which there are many. All the characters become so intertwined as a consequence of Emma’s meddling. My familiarity with the story helped me track each character’s journey thematically right from the very start. I also knew about the social codes of the period as illustrated through Austen’s novels. So, I had an idea of the temperature of Emma’s world. I know and love the classical music of Austen’s period, which gave me a few clues as to the instrumentation we might use. Autumn had two original pianofortes from the period for Jane Fairfax and Emma to play in the film.  She wanted us to use one of them for the score. We had it installed in the studio. It was really wonderful having an original instrument from the period to inspire the sound of the score. Those kinds of threads and links contribute to the film’s world feeling connected and in harmony with itself, which I really believe can be felt by an audience.

I understand that Autumn talked about Prokofiev’s Peter and the Wolf as a model. Were there previous films or composers that helped set the right tone for you?

Straight away, Autumn spoke to me about Prokofiev’s Peter and the Wolf for its use of instrumentation to personify characters. She shared with me that A Room with a View was one of her favorite films, partially because of its narrative use of music, specifically opera. We talked about the use of music in the 1960’s Pollyanna, about silent movies, but also a lot about our favorite bands and songs. Her original references for the music were instantly inspiring on a personal level. Peter and the Wolf made me to think about Mussorgsky’s Pictures at an Exhibition. Since both of these pieces were a huge part of my own musical journey as a composer, being approached to create a vivid, story-telling classical score of this ilk felt significant and thrilling. Creatively, I was excited for David [Schweitzer] and I to write this expressive, narrative score on such a large scale. 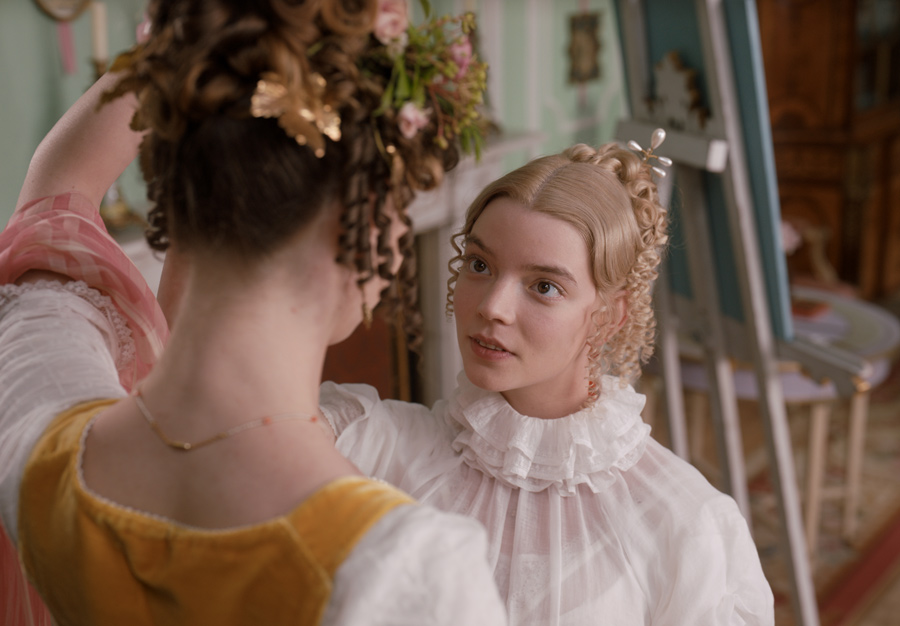 The interactions of Harriet Smith (Mia Goth) and Emma (Anya Taylor-Joy) were choreographed like a dance in EMMA.

How did you collaborate with Autumn in creating the score?

Autumn had choreographed almost every scene as a dance, so there was already so much rhythm and musicality in the action. Once we’d established the main themes and ideas, we then started to sync the music closely with the rhythm of footsteps, a gesture of an arm, a raise of an eyebrow. The score is tightly woven to the action throughout the film and therefore feels slightly exaggerated. For instance, Autumn referred to a particular section of the film as “the ballet section.” It’s in this way that I think (hope!) the music feels connected to the broader aesthetic of the film, which is so meticulously designed by Autumn.

How did you link each of the main characters to a particular instrument?

Autumn was interested to explore the use of Italian opera as a way to exaggerate Emma’s vanity and privilege from the very first moment we meet her. We had this idea of using the voice to illustrate Emma’s emotional journey—both her confidence and her vulnerability. From this idea, we choose an instrument to associate thematically with each character. Aside from the vocal music, Emma’s instrument became the harp. Mr. Knightley’s instrument became the noble French Horn. Harriet’s [Mia Goth] instrument was a folky violin, and Mr. Elton’s [Josh O’Connor] instrument, a busy bassoon. Then on a broader level, Autumn spoke about how other instruments could be used to signal emotional events. For example, the flute signals excitement in the characters. We first hear an excited flute when we are introduced to Mr. Knightley, and we then hear a playfully fluttering flute when Harriet first forms her relationship with Emma. Harriet’s musical world starts very folky, with a folk violin and wind instruments. As she becomes more a part of high society, her sound becomes a blend of folk and classical instrumentation. 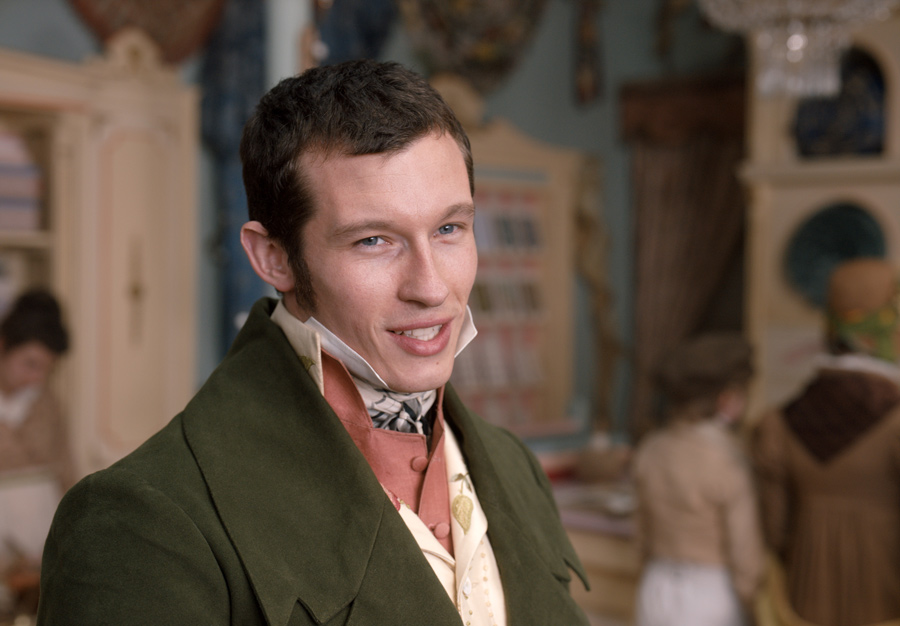 Do all of the main characters also have specific themes?

Finding Emma’s theme was essential for introducing the audience to who she is and the world which she inhabits. We wanted to illustrate her mischievous charm without making her too sweet. Mr. Knightley’s theme has grandeur to it. Harriet’s folky theme has a warmth and country feel. Frank Churchill’s [Callum Turner] has a slinky violin theme. And Robert Martin [Connor Swindells] has a tune played on a lovely and gentle cor anglaise.

You’ve scored contemporary stories like Fleabag and literary pieces like Vanity Fair. Does your approach differ for contemporary and period films?

I think my approach is to always find the humanity in a story and write the music that connects to that first. Then I’ll start to shape the music to support the journey of the characters and the drama. I start with a feeling. I don’t think that changes with the period. Feelings are feelings.

What would you like audiences to come away feeling after seeing EMMA.?