From Light To Darkness: The Suspenseful Look Of Greta

A Q&A with cinematographer Seamus McGarvey

In Neil Jordan's Greta, Frances (Chloë Grace Moretz) finds her life turned inside out when a simple act of kindness, returning a lost handbag to an older French piano teacher named Greta (Isabelle Huppert), becomes the first step in a terrifying journey. To bring this intense psychological thriller to the screen, Jordan turned to acclaimed cinematographer—and fellow Irishman—Seamus McGarvey. Uniquely talented in realizing a director’s creative vision, McGarvey has worked with some of our best directors. He was twice nominated for an Academy Award® for his work on Joe Wright’s Atonement and Anna Karenina. For Tom Ford’s Nocturnal Animals, he wove together three different stories and looks to create a unified cinematic style. For Greta, McGarvey “came up with a series of colors, variations of light and shade and composition, that belong to this film and nothing else,” extolled Jordan.

We spoke with McGarvey about crafting Greta’s unique look, shooting on iPhones, and what makes the film’s terrifying suspense so much fun.

How did you get involved with shooting Greta?

It was really a call that came from Neil. I'd worked with him a number of times. When I was starting out, I was a loader on The Crying Game. I worked with him on The Actors (2003), a film he wrote and Connor McPherson directed. It was great to get sent the script [for Greta]. I usually find it difficult reading scripts because I'm always photographing them in my head as I go through them. But this was one of those gripping scripts that I could not put down. I knew immediately that I wanted to work on it. 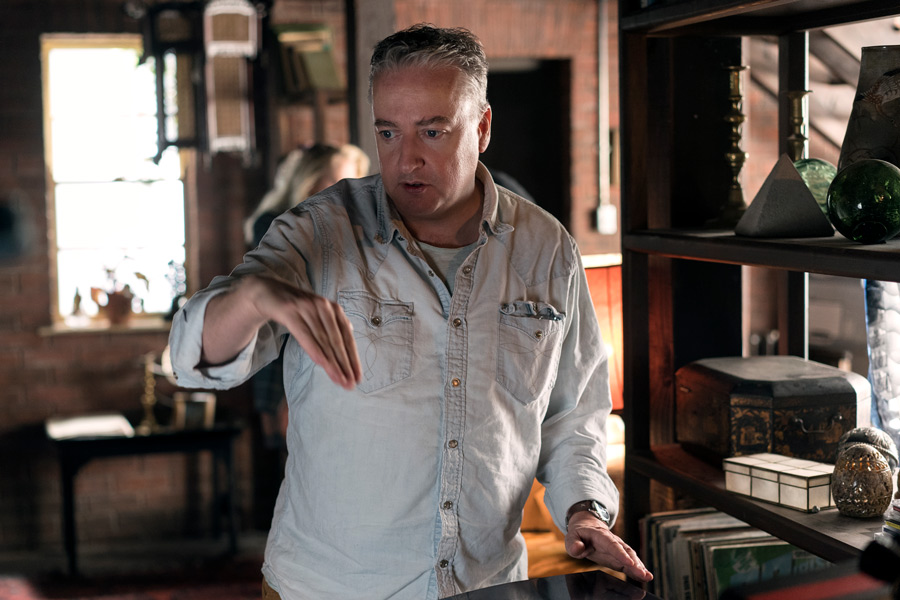 Cinematographer Seamus McGarvey on the set of Greta

I become a different cinematographer with every director, because each one approaches the material differently from a photographic point-of-view. What is singular about Neil's approach is that he has an incredible facility to explore the psychological aspects within a frame. He sets up the shots and the mise-en-scene of unsettling situations in an amazing way. There are some directors who are not that specific with the camera, or the lenses, or the light. But Neil is really specific about that when it comes to creating tension within the frame.

Greta masterfully switches tones from being a contemporary drama to a sinister psychological thriller. How did you achieve that cinematically?

There was a very conscious decision to begin the film with an innocent frame, one with more color and light. There was a sense of safety and softness in the image to show the optimism of Chloë's character. And we wanted to mask the potential darkness of Greta, so it would be more impactful when it was revealed later in the film. Greta’s home, which is a sort of a Hansel and Gretel house, becomes a lure in the film. We wanted the house at the end of the alley to feel like a magnetic whirlpool constantly drawing Chloë's character to the front door. And then within that door, there would be labyrinths. The production designer Anna Rackard worked very carefully to create layers, setting up frames within frames about the house so that the perspective would grow more complex. You could never see the full picture. Looking from the living room into the kitchen, you could only see partial views of Greta. Later things ramp and the photography style changes. The camera goes lower to the ground. There are more wide-angle shots looking up. There are shots with skewed perspective.

How did you light Greta’s home to enhance the darker qualities?

I tend to light very simply. For the daytime scenes, I motivated my source lights through the windows—there was one on either end of the space. It gives a sense of naturalism to the way things are lit in the daytime scenes. For the night scenes, however, we took more liberties with the expressiveness of the light. It moves into a more nocturnal ambience and that is when you can really play with obscurity itself. In the house, especially in back room, we wanted it to feel very much like a tomb, so we adopted a palette that was more dun-colored and sepulchral. 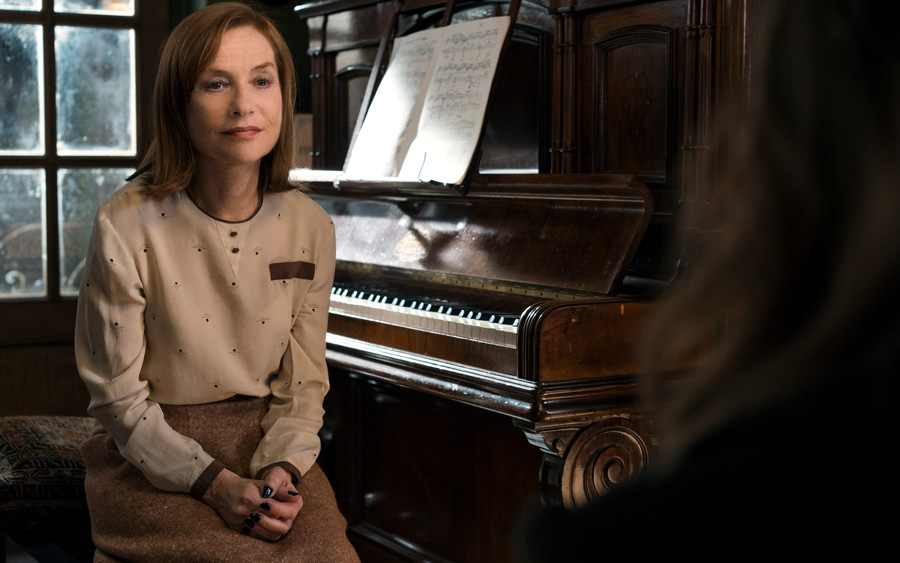 Greta (Isabelle Huppert) in the growing darkness of her house.

In the dinner scene with Frances and Greta, the camera work is very subjective.

Yes, that scene has very little dialogue in it, but it really plays with point-of-view because you are with Chloë during it. That really pushes the audience to identify with Chloë's character and for the rest of the movie you are with her. But Neil also shifts the perspective to create a sort of playful horror. You see terrible things happen, but you find yourself smiling, making you feel almost implicated in it all.

How did you coordinate with others on the creative team to make the film’s sinister feel?

There's definitely a fairy-tale element to it with Hungarian folk paintings and woodcarvings on the box in backroom. Anna [Rackard] was brilliant at rendering those changes from innocence to darkness in the design, so I didn’t have to be too heavy-handed with the photography. There is just a palpable tonal shift towards a more sinister approach in the photography. That's the genius of great writing and Neil's approach—you don't really need to over egg the pudding when it comes to telling the story.

While the story takes place in New York City, much of the production was in Dublin. How did you handle that?

First, it was lovely to shoot a film in Dublin. We did, however, shoot some exteriors in Toronto and some scenes on the Brooklyn Bridge and in SoHo in New York. It is difficult to shoot New York City because there is very little of the city we haven’t seen before. In doing this version of New York, one that isn't emblazoned with picture-postcard views, the audience is in a psychological space where their imagination works harder. I think in some ways it distances the viewer from the locale and puts them more in the protagonist's dilemma. At the same time, it was a challenge at times waiting to avoid Dublin buses entering the frame or trying to find Central Park in the middle of St. Stephen's Green.

There’s a exciting stalking sequence in the film that is shot partially on a iPhone. Can you talk about that?

We did shoot some images on a cell phone but we also shot with a digital camera because the iPhone doesn't necessarily allow for a more telephoto approach. But the sequence was very carefully thought out in terms of what we would see and how we would stage it. We storyboarded the whole thing very carefully so that nothing was left to chance. Then on the day we came up with extra shots which really ramped the chase up a bit. The great thing about Neil is that he's able to go with the flow and incorporate suggestions that occur on set.

The film is incredibly suspenseful, but also really fun. What do you want audiences to take away?

I think they will be surprised by the humor because you just don't expect that. Humans tend to laugh when they are afraid. But the humor comes from those very nuanced performances, especially Isabelle Huppert’s. It's not just a dyed-in-the-wool horror movie. It's a lot more sophisticated than that.