In 2005, Ang Lee’s Brokeback Mountain caught America by surprise. Its soaringly elegiac adaptation of Annie Proulx’s acclaimed short story about two Wyoming cowboys who fall in love was heralded as a landmark film. Entertainment Weekly named it “that rare thing, a big Hollywood weeper with a beautiful ache at its center…[and] a modern-age Western that turns into a quietly revolutionary love story.” Over the years, the film has become the gold standard for LGBTQ+ cinema, opening up a cultural space for so many other movies, like Joel Edgerton’s Boy Erased, which explore universal themes that intersect with gay lives.

For LGBTQ History Month this October, we’re adding Brokeback Mountain to our #FocusBookClub. Read Annie Proulx’s tough and tender tale of love, then see Ang Lee’s magnificent movie, and be sure to tell us what you think on social with #FocusBookClub.

Producer James Schamus talks about the making of Brokeback Mountain.

There was some open space between what he knew and what he tried to believe, but nothing could be done about it, and if you can’t fix it you’ve got to stand it.

In the October 13, 1997 edition of The New Yorker, Annie Proulx published her story “Brokeback Mountain” about two cowboys, Ennis del Mar and Jack Twist, who meet and fall in love in 1963 tending sheep in the wilds of Wyoming. While born and raised a New Englander, Proulx moved to Wyoming in 1994, traveling across the American West, daydreaming about the private lives of the strangers she met at the bars and coffee shops along the way. “I had to imagine my way into the minds of two uneducated, rough-spoken, uninformed young men,” Proulx explains about creating Ennis and Jack. “I spent a great deal of time thinking about each.” "Brokeback Mountain" became the jewel of her collection Close Range: Wyoming Stories—a finalist for the 2000 Pulitzer Prize for Fiction. Calling Proulx’s writing “brilliant,” New York Magazine describes "Brokeback"’s tragic cowboys as “Westerners. Caught up in myths impossible to live out but death to let go of, supposing they even could.” 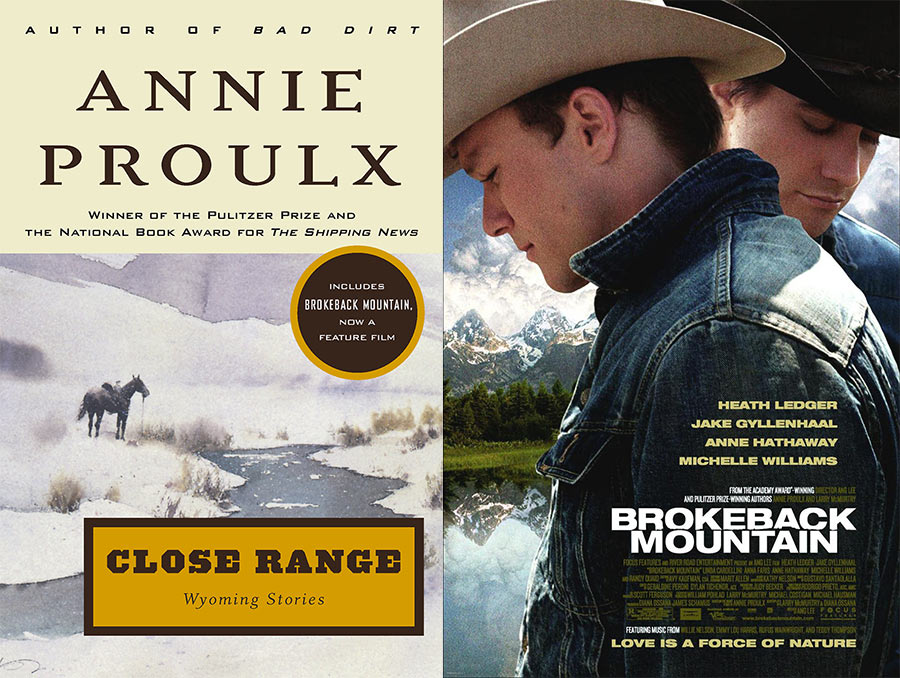 The book cover and the movie poster

After reading Proulx’s tale in The New Yorker, Diana Ossana knew “this was a masterpiece of a short story, with the potential to touch many, many people.” She and her co-writer Larry McMurtry (a Pulitzer Prize winner in his own right) crafted an elegant screenplay that brought Proulx’s rugged spirit to the screen. After going through several directors and pairings for Ennis and Jack, producer (and former Focus CEO) James Schamus brought the story to Ang Lee. “I grew up in Taiwan, so nothing is more remote to me than gay cowboys in Wyoming,” Lee recalls. “But the story just refused to leave me.” After getting financing for the “gay cowboy” movie that everyone said “no” to, Lee created one of the great love stories of all time. It came in #4—after Gone With The Wind and Casablanca—on E! Online’s list of “The 10 Best Romance Movies.” The film was nominated for eight Academy Awards®, winning three, including Best Director for Lee and Best Adapted Screenplay for Ossana and McMurtry.

While the story is set in Wyoming, the titled mountain in Annie Proulx’s story was fictional. To bring the story to the screen, however, the filmmakers had to find a real mountain, one whose soaring beauty and grandeur could ground the film’s heartbreaking emotions. To fully express the rugged majesty described in Proulx’s prose, they set up camp in the Canadian Rockies in Southern Alberta, compositing two local formations to create the saddle shape suggested by the titled mountain. For Rolling Stone, Lee and cinematographer Rodrigo Prieto—who was nominated for an Academy Award®— worked together to “transform Proulx’s terse prose into expansive visual poetry [and] find the beauty and terror in nature that mirror the vivid and sometimes violent relationship between the two men.”

Ennis and Jack's lives are framed by the mountains around them.

For her story, Proulx conjured up Ennis and Jack from her imagination. But when they emerged on screen, the pair took on a life of their own. “When I saw the film for the first time, I was astonished that the characters of Jack and Ennis came surging into my mind again,” Proulx recounts. "They're as iconic as the mountain," notes The Atlantic Magazine about the two men who live on in the popular imagination. In addition, the film gives added depth to the women in the story. In writing the screenplay, McMurtry recalls, “I definitely found the women most fascinating.” Along with Jack and Ennis, the film presents, as USA Today points out, “artfully developed female characters potently acted by Michelle Williams, Anne Hathaway, and Linda Cardellini as wives and lovers either heartbroken over what's happening or cluelessly mystified.”

When Proulx’s story first appeared in the pages of The New Yorker, her intimate knowledge of her “rough-mannered, rough-spoken” men confirmed her reputation as one of our great chroniclers of the American West. But when the movie came out eight years later, it proved to be something much different—a cultural phenomena marking a sea change in the LGBTQ+ representation in film. Sensing the film’s growing cultural power, Lee suggested, “I’m not the creator of that movie—I’m just a participant.” The film moved, and continues to move, not only those who see it, but also those who made it.  Looking back ten years later, Gyllenhaal recounts how “it gave me the idea that movies can be important, that they do have some sort of political value.”

Brokeback Mountain had a lasting impact on the American conversation about LGBTQ+ lives.